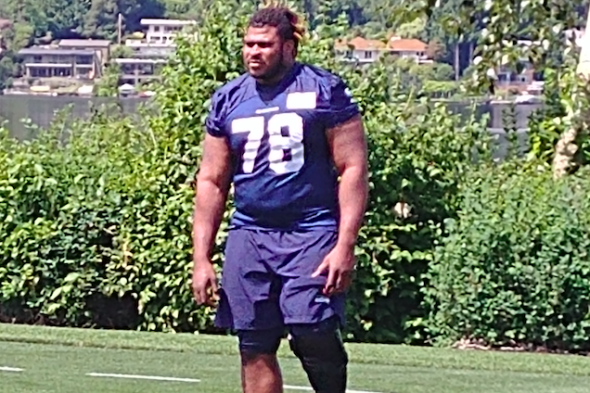 D.J. Fluker is free to take his 350 pounds to the highest bidder. / Art Thiel, Sportspress Northwest

The upgrade work on the Seahawks’ offensive line begins with demolition. A second piece was torn out Sunday night when starting C Justin Britt, who missed the second half of the 2019 season after ACL surgery, was waived. That news followed by a few hours the waiving of RG D.J. Fluker.

After the departure in free agency of Germain Ifedi, the Seahawks’ line will have at least three new starters in 2020.

The cut of Britt, 28, who made 86 starts in 87 career regular-season games over six seasons, will save $8.5 million against the salary cap, after a savings of $3.7 million on Fluker’s deal. After the draft Saturday, the Seahawks had 19 offensive linemen on the roster, and cut the two of the three highest salaries.

When coach Pete Carroll said Friday that third-round draftee Damien Lewis “takes a back seat to nobody,” it wasn’t clear that the right guard from NCAA champion Louisiana State was about to settle into the front seat. The ouster of Fluker, 29, a two-year starter, means Lewis is the leading candidate to succeed him.

Fluker  seemed to take the news professionally when he announced his departure on Twitter.

Thanks to everyone for making Seattle my home. I ain’t going anywhere, I like the #PNW. Where I work next won’t change where I live from here on out.

~ D.J
PS. @DangeRussWilson thanks for the call. Appreciate you! pic.twitter.com/DB82tQHD5J

QB Russell Wilson, who watched Britt move from tackle to guard before finding a home at center, tweeted a salute.

In life… we all meet people who we get to spend time with and talk life and compete to be the best in the world with… well JB.. thanks for all the focus and hard work and love you brought to the game. You laid… https://t.co/WKsZFLwfGu

The moves weren’t entirely surprising. The suddenness was, coming a day after a draft whose run-up was curtailed by an NFL-wide shutdown from the pandemic, meaning teams had less time to interview and evaluate prospective draftees prior to selection.

Apparently the Seahawks had seen enough film on the 329-pound Lewis, and heard enough about him from his coach, Ed Ogeron, who was an assistant under Carroll at USC, to need no further proof from any pre-season competition — however much there will be as the shutdown continues.

The job has not been handed to Lewis, who will have arguments for the spot from third-year Jamarco Jones and second-year Phil Haynes. Also on the guard roster are holdovers Jordan Simmons and Ethan Pocic, plus free-agent newcomer Chance Warmack.

Joey Hunt took over for Britt in the the season’s second half and held his own despite being undersized. He returns after signing his free agent tender, but will be challenged by free agent newcomer B.J. Finney from the Steelers.

At left guard, incumbent LG Mike Iupati, 33, was recently re-signed, but faces challenges from the guards previously mentioned. Only LT Duane Brown is assured of his spot.

Britt was a second-round pick (64th overall) in the 2014 draft from Missouri and as a rookie started every game at right tackle in a season that reached the Super Bowl against New England. His knee injury in week eight was the first major one of his career.

A first-round pick from Alabama by the Chargers in 2013, Fluker came to Seattle as a free agent in 2018 from the New York Giants. He started nine games that year, when the Seahawks led the NFL in rushing, and 14 in 2019. His 350+ pounds were an asset in the rushing game, but not so much in pass protection. His history of injuries sometimes limited his in-game effectiveness.

Cutting both players now gives each a better chance to catch on elsewhere. After Monday on the NFL calendar, signings of free agents will not generate compensatory draft picks.

In three years in Baton Rouge, Lewis started 28 games in a row with a line regarded as the best in the country, and was decisive in the 15-0 run to the title. LSU tied the NFL record for a seven-round draft with 14 selections, including four O-linemen, one of which was a long snapper.

“From 2017 to 2019 this year, we did a little bit of everything,” Lewis told Seattle-area reporters Friday on a Zoom conference. “We spread guys out, gap plays, true inside, some wide zone. We did pretty much everything.