Ahead of the posse, NCAA gives up its death grip on amateurism. Players can be paid for use of their names. College sports leaps from 19th century to the 21st. 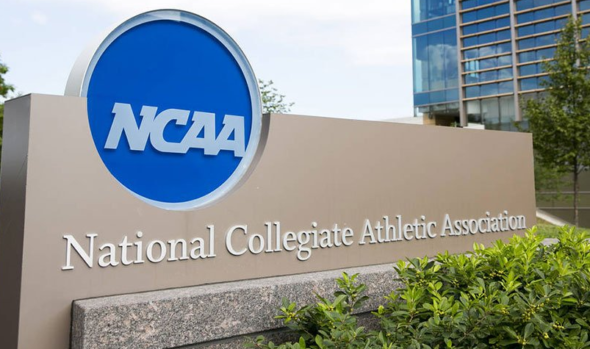 The NCAA headquarters still stands, despite an attack by reform. / NCAA

Dorsey: Whatcha got for me, coach?

Lake: Serious Seattle bling. We have a new football video game, MadMax 2022, from Nintendo, which wants your exclusive endorsement. We have a paid internship from Microsoft in their G5 Deathstar program that won’t require work except for you hosting its YouTube channel in the summer. And finally, we have an unlimited account for you at Seattle’s most unaccountably downscale hipster joint, Dick’s. Package’s first-year value: $150,000.

Dorsey: From USC, I got 10 speaking lines with Chadwick Boseman in Black Panther 2.

Dorsey: See you in the Coliseum, coach.

Maybe that’s how it will go. Maybe not.

For sure, college sports will be different after the NCAA nervously hit the big red button on the time machine Wednesday, launching it from the mid-19th century, when British royals concocted sports amateurism, into the 21st century.

And you wonder why Chris Petersen left big-time coaching.

I don’t know where on his grievance list was the permitting of athletes to earn money for their football work. But it was there. Despite my several efforts at his pressers, Petersen would merely clench his teeth and sweep left around my questions.

He knew trouble was coming.

After the California legislature in September made a law prohibiting the NCAA from punishing its state schools that allow athletes to earn money from use of their names, images and likenesses (NIL), the centuries-long fight to prop up amateurism was over.

Rather than wait for many of the other 49 states to follow suit, the NCAA grudgingly set about to build its own gallows. If you’re in the mood — and what the hell else are you doing this morning, anyway? — here is the complete release.

The governing board unanimously voted in favor of permitting college athletes to financially profit from the use of their NILs. The policy is set to go into effect in 2021.

The key point in the release ended the second paragraph:

The board emphasized that at no point should a university or college pay student-athletes for name, image and likeness activities.

That means that income to players comes not from the schools but from third parties, e.g., Nintendo, Microsoft, Dick’s, Marvel Studios. In that way, athletes are like music majors who work jobs on the side giving lessons. They’re not, you know, employees. Even if in the case of athletes, with practice, film study, injury rehab and travel, they are full-time job holders.

The NCAA can still sign billion-dollar rights fees, its schools can still pay millions to coaches and executives, but they still won’t pay athletes. Somebody else will.

That’s where we slide into high drama: Will recruits make their school choices, or, once enrolled, decide to transfer, based on the commercial connections schools can scare up with advertisers/sponsors/boosters/donors?

The NCAA thinks its new rules proscribe athletes from being brand endorsers by limiting income to businesses “consistent with the collegiate model.” What does that mean?

Currently, the rules allow athletes to endorse only the NCAA, its member institutions and the branding partners in licensing agreements with NCAA institutions (e.g., Nike). Hah.

My guess is that one athlete could hire a dorm buddy who’s a first-year law student to file a suit against that limitation and win the case on summary judgment before the coronavirus gets to halftime with us. While they’re at it, they also might want to sue for the right of, say, a UW athlete to secure a Nike endorsement even though UW is outfitted by adidas.

These, of course, are the sorts of questions that are defined as the slippery slope. Once the NCAA agrees in principle, as it has, to permit acceptance of compensation by players, it’s only a matter of time before the balsa-wood rules preserving the remaining status quo of amateurism are blown apart by legal challenges.

Some will lament that this blatant professionalism threatens the sanctity of the collegiate model. I would say that should have been considered well before college coaches became the highest paid public employees in 39 of the 50 states.

And to those who fear the commercialism will benefit male athletes at the expense of women, there is nothing stopping a company from celebrating a female athlete with billboards, commercials and a social media campaign as she speaks well of the company’s products. Since they are 51 percent of the marketplace, my guess is women would be an attractive demo.

We are in a time of profound change when it is common to hear the phrase, “the new normal.”  In the small world of big-time college sports, the same is also true. In this case, the virus was exploitation, and the curve just got flattened.