Assuming there’s a 2020 season, the Seahawks get five big road trips, four games in the bright lights and three of the lamest December opponents, all in a row. 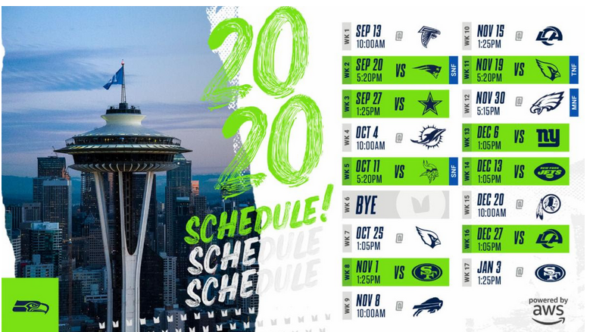 The Seahawks open at Atlanta Sept. 20.

Unless the pandemic becomes endemic to America, the NFL is insisting on a season in 2020. The Seahawks will get a chubby chunk of its spotlight with four prime-time games, including their home opener Sunday night at the Clink Sept. 20 in against the New England Patriots.

QB Tom Brady must have known what was coming, and left for Tampa Bay. He scared, bro.

The NFL’s annual schedule reveal Thursday, diminished by the national public-health crisis, nevertheless was given a four-hour show on its network, taking advantage of the dearth of sports entertainment to bloat out.

They managed to Zoom up Seahawks coach Pete Carroll at home, where he remarked on the plethora of trips to the Eastern frontier towns of Atlanta, Miami, Buffalo, Philadelphia and Washington.

“You notice on our schedule we’re going across country quite a bit,” he told the network. “We’re gonna pick up some miles. We’re familiar with that. It’s how we do it.”

The Seahawks open the season on the road in Atlanta Sept. 13, get a bye in week six, and will have an unpleasant stretch in November before, of course, ending the season in Santa Clara Jan. 3.

On Nov. 1, they host the 49ers in the teams’ first meeting, then get two road toughies:  at potentially lake-effect-inclement Buffalo Nov. 8 for the first time since 2008, playing a rising Bills outfit that was a 10-6 playoff team last year, then a trip to Los Angeles Nov. 15 for their first game in the new SoFi Stadium in Inglewood against the Rams. The Seahawks return to host the Arizona Cardinals, who consider the Clink a second home, Nov. 19 in the Thursday night game.

But if you think that’s a tad harsh, consider the Minnesota Vikings. The Sunday night Oct. 11 game marks the third year in a row the Vikings have played in Seattle in a nationally televised night game. The previous two years it was on Monday Night Football.

The Seahawks return from the mini-bye Nov. 30 to play their final prime-time game, in Philadelphia on Monday night. There is a possibility the NFL could flex the Seahawks in December into a fifth prime-time game (the maximum) if the networks see a juicy match-up.

The Seahawks have just six games against teams who reached the 2019 playoffs:  The 49ers twice, and the Pats, Bills, Vikings and Eagles. Based on 2019 records, the Seahawks have a middling strength of schedule, a 129-125-2 cumulative record that ties for 13th.

Rematch at the Benz, where Atlanta (7-9) lost 27-20 a year ago, despite the fact that coach Dan Quinn, former Seahawks defensive coordinator, coaxed 460 passing yards from backup QB Matt Schaub. The game established the profound badness of Seahawks pass defense.

Second game of the first season in 20 years without Brady, and the Pats’ first visit to Seattle since 2012, when CB Richard Sherman encountered Brady after the 24-23 win and queried to TB12, “You mad, bro?” Brady got happy three years later in The Game That Shall Not Be Recollected. Pats were 12-4 last year but looked bad in playoff ouster.

The Seahawks take their talents to Miami Beach for the first time since 2012, and may get lucky with the game date, being after Miami’s standard 100-degree/100 percent humidity Septembers. A 5-11 Dolphins team had five picks in the first two rounds,  including QB Tua Tagovailoa.

Seahawks were up 34-17 in the second half a year ago on MNF when Vikings QB Kirk Cousins struck with two TD passes in the fourth quarter as Minnesota (10-6) caused a massive pucker at the Clink. Seahawks rushed for 218 yards. Those were the days.

A year ago, Seahawks won by 17 at Arizona and lost by 14 at home, the game in which RBs Chris Carson and C.J. Prosise were lost for the season. The Cardinals (5-10-1) were still a crappy team but they manage to find a way to make Seattle miserable. Now they think rookie first-round defensive demon Isaiah Simmons is just the guy to mess up Russell Wilson.

A year ago, Seahawks won in Santa Clara by three in OT and lost at the Clink by five in two riveting games that revived the rivalry. Niners (13-3) are the NFC champs and resident division bullies. But as long as coach Kyle Shanahan has QB Jimmy Garappolo, there’s always a decent chance to screw it up.

Seattle’s last road game against the Bills was in 2012, but it was played in Toronto, so the first trip to Orchard Park since 2008 will be a delightful tourist adventure for all the Northwest newbies. They game could have been in December, which would have been rated five snowplows. But in early November, we’re talking sleet, ice pellets and freezing rain.

A year ago, the Seahawks won by one at the Clink and lost at the Coliseum by 16, a brutal game in which Seattle had no offensive touchdowns and looked nothing like a playoff team. But it was the Rams who finished 9-7 and out of the postseason. In the debut season for the Rams’ over-wrought SoFi Stadium, Hollywood has no tolerance for bad second acts.

Arizona has won four of its past five in Seattle, meaning this is the short-notice game where QB Kyler Murray gets 500 yards in total offense, an important Seahawks player gets hurt and Carroll is has no explanation for how this keeps happening.

Somehow the Seahawks last season twice beat the Eagles (9-7) on the road by the score of 17-9. For all the offensive wizardry of coach Doug Pederson, he has solved the porous Seattle defense for one touchdown, and that was a gimme with two minutes left in a 17-3 game in the regular season. Eagles are the NFL’s worst good team. Why is this on MNF?

Even though they made he playoffs as recently as 2016, the Giants (4-12) have somehow become an anonymous New York sports team. They don’t even have Eli Manning, who won two Super Bowls, to kick around anymore. Go ahead, ask yourself: Who is the Giants head coach?

The Jets (7-9) haven’t been to Seattle since 2012, when, in a 28-7 loss, Tim Tebow stepped in for QB Mark Sanchez and completed all three of his passes and ran four times for 14 yards.  But even if they have missed the playoffs nine years in a row, they made ex-Seahawks OT George Fant a rich man (three years, $27 million).

The profoundly dreary Washingtons (3-13) have a new coach, Ron Rivera, and the best defensive player in the draft in Chase Young of Ohio State. But they still have owner Daniel Snyder, the Kramer of sports owners. This game will conclude the worst three-opponent stretch of the Carroll era. How does that happen?

At this point in the season, the Jared Goff experiment should be over, and coach Sean McVay will have installed free agent QB Cam Newton, who will have revivified his career and become the new king of LA sports. Together, they will have pinned he needle on insufferability.

Assuming most of us are back at work and some of us are purchasing plane tickets, take a New Year’s weekend in the Bay Area to watch in person the best football game of the season while saying farewell to a year that may go 0h-for-365.