An MLB game with no fans? Ex-manager Buck Showalter managed one once, and doesn’t recommend it. But plans are moving ahead if the virus moves on. 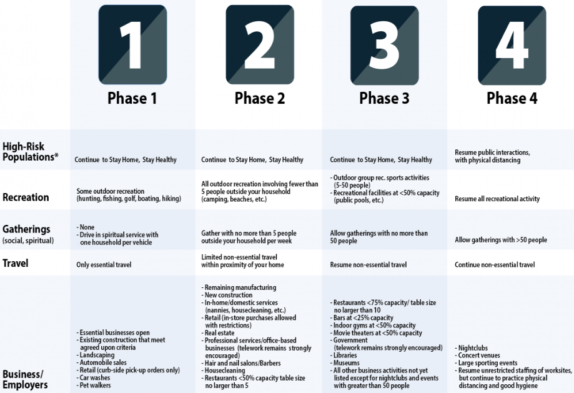 The four phases of Gov. Inslee’s plan for returning the state from the coronavirus shutdown. In the lower right corner, under phase four, which can begin no earlier than July 6, allows for the re-opening of businesses that have  “large sporting crowds.” / Office of the Governor

As everyday life slowly crawls back up to the hilltop from which it was thrown seven weeks ago, some of the daily incremental developments provide a glimpse of hope. Even for the return of sports.

That includes an update from Gov. Jay Inslee Friday that outlined the four phases he and public health officials want the state’s citizens to follow, lest we backslide from our quarantine results into an abyss from which even Seahawks coach Pete Carroll can’t happy-talk us out of.

Inslee’s timeline has phase four starting no earlier than July 6. He and public health officials caution the re-opening is, of course, subject to the whims of the coronavirus, as well as how disciplined and observant we are regarding maintaining our new habits.

Even if Washington helps lead the way with this slow, careful return, there’s no guarantee that teams in other states will be in the same public-health position to allow the return of spectator sports under relatively equal conditions in a championship season.

That is why MLB has put in so much time and effort to concoct a partial season that has a better chance to be completed independent of the decisions of multiple states.

Commissioner Rob Manfred put it this way in a letter to to employees last week, “While I fully anticipate that baseball will resume this season, it is very difficult to predict with any accuracy the timeline for the resumption of our season.”

One option under consideration, spelled out in an exhaustive story by ESPN’s Jeff  Passan, suspends the current leagues and divisions and instead places each of the 30 teams in one of three hubs in Phoenix, Dallas and Tampa. Every team plays two three-game series against all nine opponents for a total of 54 games. That gets MLB to September and a chance to see whether public-health officials will green-light a return to the affected home cities.

The three-hub option likely means a quarantine zone for all players, game/stadium personnel, TV crews, hotel and transport employees. But because the U.S. is so behind many countries in its ability to do mass testing with quick turnarounds, the games will almost certainly be played without fans.

Independent of this massive logistical undertaking is an emotional and psychological consequence of the fans’ absence that I hadn’t considered until Buck Showalter talked about it on a national ESPN radio show the past week.

A three-time American League manager of the year (he was Yankees skipper in 1995 when the Mariners beat New York in the semi-immortal ALDS series), Showalter was the Orioles manager on April 29, 2015 for the first and so far only MLB game played without fans.

Because of several days of racial conflict in the streets near Baltimore’s Camden Yards, police barred fans for a game against the White Sox the sake of safety. Apart from the serious social issues he addressed at the time, Showalter recalled that absence of fans changed something fundamental about the game.

“You need people there and saying, ‘Hey, it’s important what you’re doing. We’re counting on you,'” said Showalter, now an analyst for the Yankees’ YES network. “You need that emotional flicker, so to speak, that makes you realize why you do all these things, especially in baseball, where you play 162 games, seven days a week.

“That’s what I have trouble getting across to football coaches and even basketball coaches. We play every day. We need that emotion.”

Football’s once-a-week schedule and the more frequent pace of the calendars in basketball, hockey and soccer don’t compare to the dailyness of baseball.

“I think what really hit me was how much a lot of the emotion of the game is driven through the emotions of the fans,” he said. “We didn’t have any walk-up music. It was pure baseball. You could hear the announcers talking. You had to be careful about what you said to the umpires because they could hear every word. We didn’t have to use the bullpen phones. Heck, we could just yell down there. But it was really different.

“The novelty of it wore off very quickly.”

Showalter thought that players who rely on only on self-motivation lose an edge in the absence of the energy of fans.

“If you keep going to that well too often to self-motivate, it becomes a real issue,” he said. “There’s so many times in sports when you’re doing something so repetitiously that you kind of get into that automatic-drive mentality for a while.

“You need that extra juice.”

In a sport overtaken by analytics, it would hard for baseball to develop a metric for what Showalter was describing. Here’s a start.

It’s easy to say that players are paid so much money, the least they could do is pay full attention. But fans of all 43 years of Mariners baseball know that income has little influence on daily degree of diligence.

Barring another wave of the coronavirus, MLB seems determined to have Bubble Ball. If Showalter is right, perhaps the owners and players need to agree right now that upon completion of the season, all records should be destroyed and further conversations about 2020 be prohibited.