Thiel: Who needs Clowney? Not the Seahawks

The speculations about Jadeveon Clowney’s fate are seemingly endless. One thing seems more certain: The Seahawks have loaded up and are moving on. 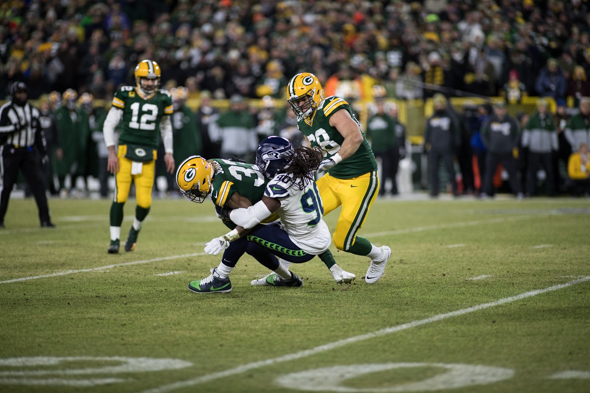 Against Green Bay in the playoffs, DE Jadeveon Clowney was in on seven tackles, shared a sack, had two hurries and a quarterback hit. / Drew McKenzie, Sportspress Northwest

Are you like me? Do you wonder if we’ll have a coronavirus vaccine before Jadeveon Clowney decides where to play?

Actually, you probably have larger concerns. But in the vast desert of sports news, a Clowney speculation story pops up randomly between the cracks, and suddenly it is treated as a sequoia.

Yet, as one who vows to never criticize another person’s garden, here I am, pruners in hand, ready to help.

The latest sprig was a report last week by ESPN.com Seahawks reporter Brady Henderson, who was told by an unnamed source that the free-agent defensive end was unlikely to re-join the Seahawks because the club reduced its offer. Presumably, that was because they hired some replacement help in fellow free-agent pass rushers Bruce Irvin and Benson Mayowa.

The story followed shortly after the beginning of Clowney’s PR campaign Tuesday, an interview with a TV news station in Houston, where Clowney lives and works out. The video showed him engaged in robust drills, looking in the manner of a player in perfect health. He was also in perfect rhetorical manner, saying nothing but warm, kind things about his lone season in Seattle.

It was his first public appearance and utterance since he had abdominal surgery for a sports hernia that diminished his play for much of the season’s second half, so the report was a thing:

Free agent DE Jadeveon Clowney (@clownejd) working at @PlexAthlete in Houston: “Whoever I sign with is gonna get the best version of me..I know what I got to do to get where I need to get.” (Hasn’t ruled out the @Seahawks): “I love Seattle..I love everybody on the coaching staff” pic.twitter.com/Al0dbbKQcG

The interview included a bit of actual insight: Clowney offered some awareness about the health questions surrounding him, something that wasn’t clear he had.

“It might have a little more than I expected,” he said, almost off-handedly.

In the absence of any confirmed evidence of the size of the offer from Seattle, or any other bidders, it’s plain by Clowney’s continued unemployment that he over-estimated his market value.

As followers of this saga know, the error was compounded by complications from the coronavirus.

On March 16, two days before free agency began, the NFL responded to naional public-health warnings with a memo to all 32 teams barring in-person interviews with free agents, requiring local physical examinations for them, rather than team-conducted exams. The league also banned travel by team personnel to meet with free agents as well as those players traveling to team facilities.

The abrupt decision has trapped Clowney to this day, because the Seahawks are the only team to know his condition, and perhaps his future physical limitations.

Rival bidders have to ask: Why would a team with one of the crappiest pass rushes in the league in 2019 decline to re-invest in a top player at their biggest weakness?

Whatever the Seahawks know, they certainly seem secure enough in it to risk the embarrassment of Clowney signing elsewhere and fulfilling his potential as one of the league’s top edge rushers.

“We took a good run at it,” Schneider told KJR-AM radio last week. “It didn’t happen. He’s a great guy. He fit in great in the locker room, did a really nice job for us, but we need to be conducting business, and he just was not in a position to make a move. So we gave it a run and now you’ve got to keep going, and that’s what we’ve done.”

What the Seahawks had done became more clear Friday, went Irvin’s contract became public. Instead of the speculated compensation of $3 million to $4 million, OverTheCap.com reported the one-year deal was $5.9 million, including $3 million guaranteed.

That’s a lot less than Clowney’s original top-shelf desire to be paid around $21 million, but it does make Irvin the eighth-highest paid Seahawk. Combined with Mayowa’s $3 million, the pair, both former Seahawks, represent a considerable investment in the position.

So despite the public pleasantries from Schneider and coach Pete Carroll about wanting the return of Clowney, who had three sacks in 13 games while facing a lot of double-teams, they clearly determined he isn’t worth the wait. Particularly in this season, when personnel decisions are going to be scrambled because of the lost live practice time due to the covid-19 restrictions.

The Seahawks can say they haven’t “closed the door,” because they may have an emergency need for help down the line. But they would rather have that cash available for all positions now rather than commit, say, $10 million to Clowney, for a combined $20 million to three players who play about the same position.

Keeping financial powder dry for in-season hires, as was the case in September when the Seahawks surprised the NFL by trading with Houston for Clowney, might be more important this season because of the risk throughout NFL camps of increased injuries from the absence of standard off-season training that will damage teams close to the cap.

“There will be cap-casualty guys out there throughout the off-season,” Schneider told KJR. “What you don’t want to do is bring yourself right to the point (up against he salary cap) where you’re not able to add players that are all of a sudden available on the market that you didn’t see coming.”

Don’t get the impression that Irvin, 33, and Mayowa, 29 in August, are anything but one-year patches. The real game changer in Seattle for Clowney’s situation was the draft of Tennessee rusher Darrell Taylor in the second round.

The more that is learned about Taylor, the more he looks like a long-term answer. Obviously, a potentially truncated season is a lousy way to start an NFL career, but video analyst Samuel Gold sees a lot of raw materials in the guy for whom the Seahawks moved up 11 spots to take.

A year ago, Clowney played the long game in Texas with a contract holdout that forced a trade to Seattle. It seemed to work for him then, and it may work for him this summer.

But the Seahawks largely have put themselves into a position where they don’t have to care.

All they need is a season in which to prove it.