The California State University system Tuesday said it is going online in fall. Without students, there’s no football. One affected school is Huskies’ week 2 foe. 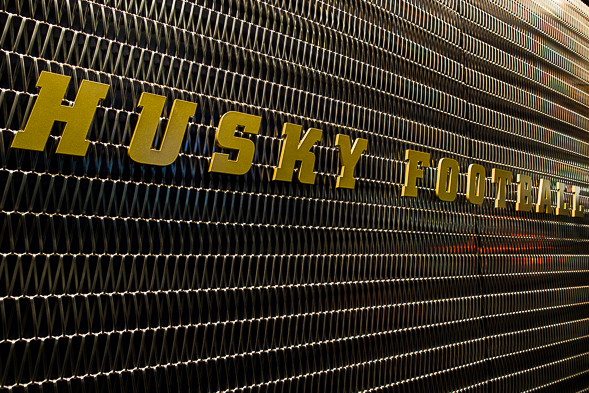 The Huskies may have lost an opponent, Sacramento State, from the 2020 schedule. / Drew McKenzie, Sportspress Northwest

While the czars, viziers and potentates of sports are putting their shoulders into pushing the coronavirus off the calendars, evidence grew on a busy Tuesday that the sucker is dug in.

Noteworthy was news that the California State University system announced that most in-person classes on all 23 of its campuses in the fall would be cancelled and instruction instead would be offered primarily online.

Why should football fans in Washington care? One of the affected campuses is Sacramento State.

Its football team, the Hornets of the Big Sky Conference, is scheduled to play at Husky Stadium Sept. 12, Washington’s second game following the ballyhooed Sept. 5 game versus Michigan and its wacky provocateur-coach, Jim Harbaugh.

Some Huskies fans might say the absence of Sac State is no big deal, since it’s a walk-over anyway, despite the fact they were 9-4 in 2019 and made the FCS playoffs. That’s not the point.

Due to circumstances beyond UW’s control, a game appears to have fallen from the 2020 schedule. The question: Is it a one-off, the first of several, or the proverbial canary in college football’s coal mine?

But it doesn’t include two Pac-12 schools: UCLA, and Cal (USC and Stanford are private). They belong to the separate University of California system (please don’t ask why; it’s California, where everything is overdone).

The news broke late enough Tuesday that the sports conferences had little chance to push back on the decision by the CSU Board of Trustees. But they will try. The cancellation of games, on the whim of a germ, will be an economic disaster for schools and conferences.

The problem for non-Power 5 conference schools isn’t the loss of a whole football season. Since 98 percent of FCS programs lose money, according to USA Today, they would be better off financially by not playing.

The problem is in not getting paid to play the big “guarantee game.”

Sac State will earn more than $1 million for traveling to Seattle to endure an anticipated non-conference whipping, and by dint of the standard contract, UW does not have to play a subsequent road game in Sacramento. While $1 million may not seem like much these days, since the median annual operating deficit among FCS schools is $2.4 million, it is a big deal.

As far as the U-California system that supports the Pac-12, it has made no  determination yet about online-only classes, and the subsequent fate of sports this fall.

However, NCAA president Mark Emmert went on the record Friday as saying there cannot be games on campus if public-health officials determine that it is not safe for students to be on campus. And since the Pac-12 operates in six states and in cities big and small, the chance for 1o to 12 unique governmental responses to virus mitigation is high.

As far as the conference goes, it remains publicly more or less confident that will start a season. But feel free to look behind Larry Scott to see if his fingers are crossed.

In an interview Friday with Jon Wilner of the San Jose Mercury News, the Pac-12 commissioner said he and university presidents were in alignment with Emmert.

“We’ve said from the start that if it’s not safe for the students, it’s not safe for the student-athletes,” he said. Left unsaid by Emmert and Scott is what constitutes a student/faculty return: In-person classes by lab-heavy degree programs? A small or large percentage of regular classes with live humans? Or a group of six socially-distanced students working laptops in a coffee shop on The Ave?

And when does practice begin?

In a local-media teleconference interview Tuesday with Jimmy Lake, the new UW head coach said he’d prefer eight weeks of practice, but is settling for six, meaning about mid-July.

“We would all want more time,” Lake said of his fellow Pac-12 coaches. “Eight weeks would be great, and anything more than that would be obviously going in a positive direction. But six weeks would be a minimum. Get these guys two weeks of just getting in condition, and then start implementing our schemes and going through meetings.

“So I think six weeks, as has been agreed upon, would be at a minimum the best for our guys.”

What happens if one or more Pac-12 university towns remain in lockdown in mid-July, putting them at a competitive disadvantage?

“We’ll have to cross that bridge when we get there, but I don’t expect that,” said Scott, who added the presidents were unified in their decision to suspend organized team activities (spring ball), and expects uniformity with the decision to kick off on time.

“That’s my impression based on all the conversations so far,” he said.

Obviously, an unpredictable virus has left everyone grasping for answers because, in parlance any football fan would understand, our local and national efforts have flattened the curve, not crushed it.

The CSU decision is a benchmark for how some universities are attempting to cope with a summer forecast of a steady stream of confirmed cases. It remains to be seen how many follow suit.

Whether a football season gets played in full, in part or not at all is quite secondary, especially in Montlake.

A Seattle Times story disclosed that UW Medicine, the health-care system that has played a significant role in fighting the pandemic locally and nationally, may lose as much as $500 million by the end of August.

Staff cuts, furloughs, hiring restrictions and pay cuts are among options being considered because so many non-emergency medical procedures were canceled to make room for Covid-19 cases, and because so much new equipment had to be purchased, such as testing and protective gear.

The development is worthy of mention in case there are any wealthy sports fans who have an urge help their financially imperiled favorite college teams. There’s another favorite team in town far more worthy of private philanthropy.