Lots of spectacle and revelations in “The Last Dance.” But it was less a documentary than a hagiography of Jordan, who even making bad decisions never seemed to lose. 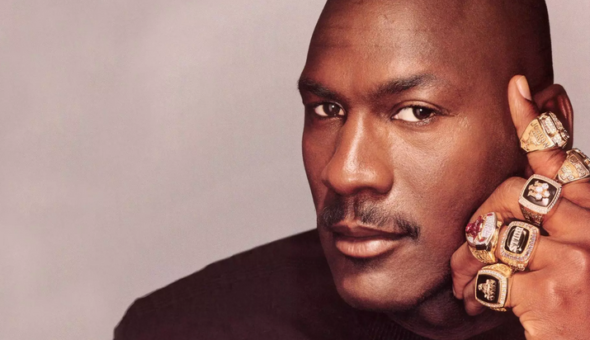 The Last Dance was a marvelously riveting, 10-hour valentine about the greatest dynasty in modern sports, the six-time NBA champion Chicago Bulls of the 1990s. It also made a point that everyone inside and around basketball knows, but typically is afraid to say.

The documentary didn’t say it either. Somebody had to.

If you watched all or most of the series that concluded its five-week run on ESPN Sunday night, I bet you did too. On top of what you saw, to make this film, with Jordan’s business partners as executive producers and with Jordan as an investor in the project (proceeds to charity, it is said), you have to be an asshole, don’t you think?

Because the glimpses into the darker corners of his career — bullying of teammates, compulsive gambling, the first retirement into minor-league baseball, his hatred for Bulls general manager Jerry Krause, his father’s murder, his refusal to use his platform for social/political activism  — ended up rationalized, neutralized or glossed over.  Jordan didn’t lose on any of the dubious narratives. Because Jordan won’t allow himself to lose at anything.

It wasn’t a documentary. It was a hagiography (a biography that idealizes or idolizes the person, especially a person who is a saint).

Having said that, the film is an enthralling repository for some of the most majestic career highlights in team sports history, wrapped around a Tim-Burton-style cast of misshapen characters. The best outcome was that every basketball fan under 30 finally was properly schooled on the identity of the game’s best player. Kareem? Kobe? LeBron? Please.

But you knew that, right? I was hoping for honest biography. I got Space Jam with profanity and a re-discovery of a truly alien creature, Dennis Rodman.

I wanted the Ken Burns treatment. Speaking of whom, here’s what America’s eminent historical film storyteller had to say about Jordan telling his own story.

“If you are there influencing the very fact of it getting made, it means that certain aspects that you don’t necessarily want in, aren’t going to be in, period,” Burns told the Wall Street Journal recently, saying he would “never, never, never, never” allow such a partnership on one of his films.

But for all my skepticism about the project, I was dumbfounded by the amazing saga in episode 10 recounting Rodman’s departure in the middle of the 1998 Finals against Utah to take part in a WCW event in Auburn Hills, Mich.

I must have been consumed by some Seattle-centric drama around Ken Griffey Jr., because I had no recollection of the story of him leaving Salt Lake City between games three and four on a chartered plane to hang with Hulk Hogan and the other steroidals for 24 hours.

He skipped a Bulls Monday practice without notice, got back Tuesday and in Game 4 Wednesday had 14 points in 29 minutes off the bench. The Bulls won to go up 3-1 in the series, which they eventually won 4-2 for the much-hailed sixth title in eight years.

And you thought Sonics coach George Karl had his hands full with Gary Payton and Shawn Kemp.

The fact that Jordan and coach Phil Jackson navigated the Rodmaniac disruption in the middle of a national championship is, by itself, worthy of an episode.

“The beauty of Dennis joining the Bulls (when he did) was we had a really mature team,” said then-teammate Steve Kerr, now the Golden State Warriors coach. “There were a lot of veteran players, and Phil had a beautiful connection with Dennis, and so did his teammates. That gave Dennis the freedom and the space he needed.

“It wasn’t a thing where we were all complaining about Dennis not making it to a practice. We just sort of understand he was his own man, and he did so much for our team that it allowed him that freedom.”

Regarding Jordan and his gnarly treatment of lesser teammates throughout his career, he offered an emotional defense in episode 7 of his ruthlessness by saying his critics never won anything, a retort most of us have exhausted by eighth grade.

“Once you join the team, you live at a certain standard that I play the game, and I wasn’t gonna take anything less. Now, if that means I have to go out there and get in your ass a little bit, then I did that. You ask all my teammates, the one thing about Michael Jordan was, he never asked me to do something that he didn’t fucking do.

“When people see this, they’re gonna say, ‘Well, he wasn’t really a nice guy. He may have been a tyrant.’ Well, that’s you, because you never won anything (starts to tear up). I wanted to win, but I wanted them to win and be a part of that as well. I don’t have to do this. I’m only doing it because it is who I am. That’s how I played the game. That was my mentality. If you don’t want to play that, don’t play that way . . . break.”

Jordan then moves out of the scene, a little upset. In the episode, the director interviews some of Jordan’s victims — Kerr, Toni Kukoc, Scott Burrell — who offer varying degrees of acceptance for Jordan’s “tough love.” And the rings prove Jordan’s point, right?

I would have liked to have heard someone say, “You know, Mike, I bet we would have won just as many rings without your kneel-before-Zod, ego-gratification bullshit.”

For a more unscripted view of Jordan’s desire to have something over on everyone, let us turn to his infamous induction speech in September 2009 at the Naismith Memorial Basketball Hall of Fame in Springfield, MA.

Observers knew right away it was going to get petty when he invited as his presenter former Sonics and NBA All-Star guard David Thompson, who played college ball at North Carolina State, rival of his alma mater, North Carolina, thereby dissing all the Tar Heels in the crowd.

Adrian Wojnarowski, now of ESPN, was with Yahoo! Sports then and covered the event. He summarized it well:

This wasn’t a Hall of Fame induction speech, but a bully tripping nerds with lunch trays in the school cafeteria. He had a responsibility to his standing in history, to players past and present, and he let everyone down. This was a night to leave behind the petty grievances and past slights – real and imagined. This was a night to be gracious, to be generous with praise and credit.

“M.J. was introduced as the greatest player ever and he’s still standing there trying to settle scores,” one Hall of Famer said privately later.

Jordan didn’t hurt his image with the NBA community as much as he reminded them of it. “That’s who Michael is,” one high-ranking team executive said. “It wasn’t like he was out of character. There’s no one else who could’ve gotten away with what he did tonight. But it was Michael, and everyone just goes along.”

That’s what happened with “The Last Dance” — everyone just goes along with whatever Jordan thinks is true. As when Bulls owner Jerry Reinsdorf, who also hired Jordan to play minor league baseball in 1994 for his Chicago White Sox farm team, got away unchallenged with saying that if given more time, there was “no doubt” Jordan would be a major leaguer.

Even the few highlights of Jordan batting for the Class AA team showed the long, loopy swing that was never going to be correctable in a 32-year-old athlete, no matter how skilled.

And setting up Krause as the homely little fat guy that everyone mocked, often to his face, because the story needed an antagonist to Jordan’s protagonist, was plain cruel.   Yes, he was an annoying control freak, but Krause hired Jacksson and twice built the Bulls into champions. He died in 2017 and had few defenders in the film.

And before you ask: No. I don’t think putting Payton on Jordan throughout the 1996 Finals, instead of just the final three games, would have changed the outcome.  The 1995-96 Bulls won 72 regular-season games and were the best team in NBA history. Period. Although I wish Karl had put Frank Brickowski on Dennis Rodman for all six games. That matchup would have its own series on National Geographic Wild.

So, no bitterness here from a Seattle columnist. A self-gratifying hagiography takes nothing away from the Bulls winning six titles in eight years despite the tensions and spectacles of being a global sports phenomenon.

The success, however, did seem to burn up all the NBA karma for Chicago. In the 21 years since the sixth Jordan title, the Bulls have had eight winning seasons. They’ve played 15 playoff series, losing 10, reaching the conference finals once, in 2011.

It’s a little like what happened after the Mariners’ 116-win season of 2001 — to create that masterpiece season, every bit of the baseball gods’ goodwill was sucked from the franchise’s subsequent two decades.

The analogy is only six titles short of being dead-on.