Thiel: Seahawks’ Dunbar turns self in to police 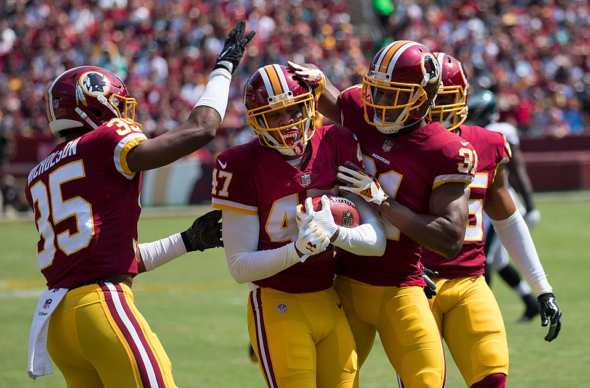 CB Quinton Dunbar in 2017 with Washington. / Keithallisonphoto.com via Wikipedia

Clarity remains elusive in the South Florida saga of Seahawks CB Quinton Dunbar, who turned himself in Saturday after an attorney claimed Friday that affadavits signed by witnesses to an armed robbery at a residence Wednesday in Miramar, FL., establish his client’s innocence.

Today our client Quintin Dunbar voluntarily surrendered at the Broward County jail pursuant to a bogus arrest warrant based solely on uncorroborated witness statements that have since been recanted. As I write this an innocent man sits in jail, facing charges that hold no water. pic.twitter.com/HkIps6x04u

Both attorneys lamented the conduct of the Miramar Police Dept., which tweeted news Friday of the arrest warrants and police reports while identifying their NFL teams.

Baker’s attorney, Bradford Cohen, confirmed Baker’s decision Saturday on an Instagram account and adopted a more conciliatory tone, writing, “Police reports are just that, reports of what was told to them or said to them . . . Court is what we use to then examine those reports, investigate those claims and allow the Defendant an opportunity to confront the evidence. Don’t rush to judgement (sic).”

Grieco told the Miami Herald Friday, “I have never in my career seen a police department so excited about arresting a celebrity.”

ESPN reported Saturday that Grieco said, “Nobody is running from this. My client is innocent. I don’t want him to do a minute in jail for this . . . Miramar Police Department is pot-committed to this case because it has become public.”

ESPN reported that Cohen said he has several affidavits from witnesses exonerating Baker of wrongdoing, and will present those along with video evidence to a judge Sunday.

“We have four victims and one witness who provided us with sworn statements under oath that were recorded,” said Rues, who noted that no police interviews have been given. “We welcome anyone that may want to provide a new statement to come into the police department and do so.”

The police report said Dunbar, Baker and an unidentified third man fled in three separate cars from a party after robbing at gunpoint the guests of their cash and valuables. One witness claimed to have met the pair a few days earlier at a party where they lost $70,000 while gambling.

Neither Dunbar, 27, nor Baker, 22, both South Florida natives, have criminal records in Broward or Dade counties, according to media accounts. Dunbar played college ball as a receiver for Florida and was undrafted by the NFL, signing with Washington as a free agent. He was traded to Seattle March 23 for a fifth-round draft choice after Washington declined his demand for a contract extension.

Baker was a first-round pick (30th overall) by the Giants in the 2019 draft after starring at the University of Georgia.