After a snub by by Devonta Freeman, Seahawks will sign former 49er Carlos Hyde to a one-year, $4 million deal, perhaps the NFL’s highest-paid backup RB. 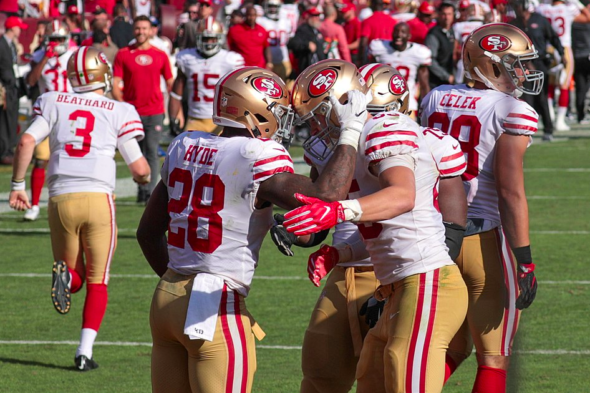 The understandable fascination with the surprise return of Marshawn Lynch late last season tended to obscure the profound poverty of the Seahawks’ running back situation. So the hire Friday of free agent RB Carlos Hyde by Seattle would seem to be a time for a reminder.

In the Seahawks’ 28-23 playoff loss to the Packers in Green Bay that ended the season, the Seahawks had 110 yards rushing on 24 carries. But 64 came on seven scrambles by QB Russell Wilson. Lynch, rookie RB Travis Homer, WR David Moore and TE Luke Willson did the rest, combining for 58 yards on 17 carries.

The Packers advanced to the NFC Championship against 49ers in Santa Clara, where backup RB Raheem Mostert in rushed 29 times for four touchdowns and 220 yards, second-highest total in NFL playoff history, to lead SF to the Super Bowl. QB Jimmy Garoppolo, arguably the weak link in the 49ers offense, felt compelled to throw eight times.

If the Seahawks had any one among Chris Carson, Rashaad Penny or C.J. Prosise, all injured in December, to exploit the Packers’ weak link, they would have played San Francisco a third time in a year. You can wager large coin that every single 49er wrinkled his nose at that prospect.

Now you understand why the Seahawks are willing to make Hyde, 30 on Sept. 20, perhaps the highest-paid backup running back in the NFL. The decision comes a year after he made $2.8 million while setting career highs for the Houston Texans in yards (1,070), carries (245) and first-down runs (55). His 4.4 yards per carry average in 2019 was the same as Carson’s.

NFL.com reported that Hyde (6-0, 229), who is set to sign a one-year deal, might make as much as $4 million with incentives, after a $3 million base. No matter how entertaining was the Lynch return, the Seahawks don’t want to count on dragging a 35-year-old out of retirement a third time. He can’t keep climbing that pole to get his cleats off the wire.

Hyde is familiar to Seahawks fans, because he was a second-round draft out of Ohio State in 2014 by San Francisco. He started 36 of 50 games with the 49ers, but had the usual litany of injuries common to NFL backs. In 2018, he split time between Cleveland and Jacksonville before a comeback year with the the Texans.

The Seahawks reportedly made the same offer to another free agent back, Devonta Freeman, who had four good years and two mediocre ones with the Atlanta Falcons. Two years younger and a better receiver out of the backfield (59 catches in 70 targets last season), Freeman reportedly said no. NFL.com said that Freeman may sit out the season if he doesn’t get want he wants.

Then again, in a 2020 calendar upended by the coronavirus shutdown, the injury rate in the NFL figures to be higher, so Freeman could get himself a better deal.

Reports in the off-season from coach Pete Carroll and GM John Schneider said Carson, who’s rushed for 1,000 yards in each of the past two years, is recovering well from a hip fractured Dec. 22. They expect him to be ready by the start of the regular season, although training camp is iffy.

But Penny tore his ACL Dec. 8 and has a longer road back. He is expected to start the season on the physically unable to perform list, meaning he is required to sit out the first six games.

The oft-injured Prosise was not re-signed, leaving Seattle with Homer, who had 25 yards in 14 carries in the two playoff games, as the second back. They drafted DeeJay Dallas in the fourth round, but the Seahawks made no secret about wanting a proven back in case a lot of playing time comes early for a team dependent on a big running game. Despite the late injuries, the Seahawks were fourth in the NFL with 137.5 yards per game.

As much as Lynch is a Seattle folk hero, the Seahawks needed someone for a full season of play to help take stress off the run-game mentals of 2019.