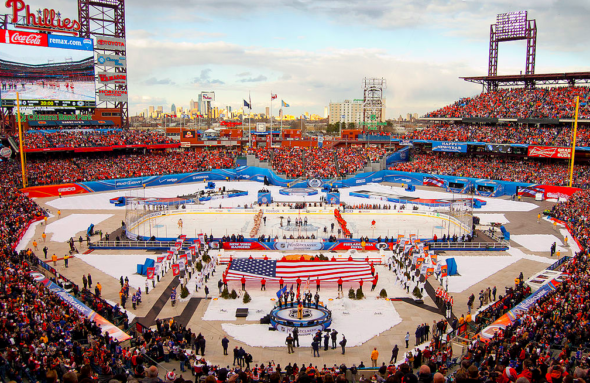 In the contest to see which sports league can pump-fake the coronavirus into leaving its feet so a season can be sneaked in, the NHL is ahead. That is, if you don’t count the NFL, which for months has planned for a tomahawk jam over the top. The fabulists who run pro football have never lacked for audacity.

He rolled out a scenario, approved by the players union Friday, for a 24-team tournament to award Lord Stanley’s Cup sometime in “the fall.” The squishiness did not end there.

Besides a pretty little tourney bracket, the plan was short on dates, sites and a clear virus-testing protocol. But it did throw away the remaining 2020 regular season of a dozen or so unplayed games for each team, as well as shunning seven teams from the field by dint of poor records when the anvil unexpectedly dropped on the regular season March 12 (I know; anvils always drop unexpectedly).

In the time of covid sports, throwing things away is a mark of progress.

He just didn’t say where the hubs were.

Bettman has yet to identify the hubs because, well, as was pointed out, he’s trying to get around the virus. His host-city candidates in the U.S. are Chicago, Columbus, Dallas, Los Angeles, Las Vegas, Minneapolis and Pittsburgh. In Canada, it’s Vancouver, Toronto and Edmonton.

But chances for anywhere in The North, hockey’s home and native land, are already undercut.

]The Canadian government currently requires non-essential border-crossers to self-quarantine for 14 days, because many of its confirmed virus cases originated in the U.S. If the law goes unchanged, the hosers are hosed by toxic Yanks.

“We won’t be in a position to use any of the Canadian cities as a hub city,” deputy commissioner Bill Daly said on the NHL’s teleconference media call. “We’re faced with having to find a solution to that. Hopefully we can.”

Since a Canadian team has not won a Stanley Cup since Montreal in 1993, this seems unseemly. The NHL can throw away regular-season games and seven ne’er-do-well teams, but it can’t throw away Canada. But if any prime minister or parliament can consider hockey players essential workers, it’s Canada’s.

“We don’t need to make a decision today,” Bettman said. “We’ll probably need to make one in three to four weeks. And at that point, we will be able to better evaluate how COVID-19 is in a particular place.”

If Bettman thinks he’ll know better in three to four weeks, he is greatly encouraged to call Dr. Anthony Fauci, the key member of the White House Coronavirus Task Force, to share his epidemiological wizardry.

But in a time when the news changes by the nanosecond, Bettman can look at three to four weeks as an eternity. He is happy to have gotten to Tuesday, where he can announce a plan the owners created and the players signed off on, at least as far as format.

Phase 2 for the NHL permits clubs to return to home facilities for voluntary and small-group workouts on and off the ice. Phase 3 is a formal training camp, no earlier than July 1, likely mid-month, each team limited to 50 players and staff personnel. Phase 4 is reporting to hub cities, date unknown.

From a marketing standpoint, the tournament might score well in an August window ahead of the college and pro football seasons, up against a potential similar NBA post-season tournament in Orlando and the early days of an awkward baseball season to devoid of spitting and dugout group gropes after home runs. What’s the point of that?

Hey, hockey can be played with face shields. Whether they can be modified sufficiently to deny the virus is a bridge public-health officials have yet to cross. Daly did say, somewhat surprisingly, that one or two positive tests won’t necessarily bring asunder the entire fragile enterprise.

Thinking they can beat the virus on a breakaway. Heady days for the NHL.