Duane Brown could have up to four new starting teammates in the Seahawks’ offensive line. And in a shut-down off-season, far less time to prepare. Quoth he: “It sucks.” 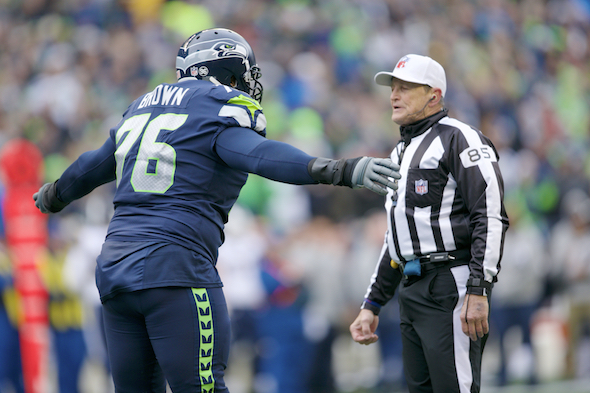 If and when the NFL regular season begins, there’s a decent chance LT Duane Brown will be the only one left from the Seahawks’ offensive line that opened the 2019 season. And he’s coming off knee and bicep injuries that limited him. He also has to help wise up the newbies without benefit of organized team activities, mini-camps, and just having lunch in the cafeteria to learn who are the introverts and who are the extroverts.

“Everything is different,” he told local media Wednesday on a Zoom conference call. “You just don’t have a feel for what’s expected, and how things go.

“That’s the main thing, and it sucks.”

No unit on any football team will feel more the consequences of the coronavirus-induced shutdown than the offensive line. Cohesion through repetition is everything, and the Seahawks group inevitably will have little because of the suckitude.

We all know the world has bigger problems. But if you want to immerse yourself in distraction — or need another reason to open the liquor cabinet — imagine Brown asking for name tags on his teammates in order to call out the double-teams for Rams DT Aaron Donald.

RT Germain Ifedi and LT/TE George Fan were let go in free agency, and RG D.J. Fluker and C Justin Britt were waived. LG Mike Iupati was re-signed, but he just turned 33 and is holding his joints and muscles together with a pneumatic nail gun.

And the Seahawks will bring to camp at least a dozen other O-linemen to try to improve a group that has helped allow QB Russell Wilson to be sacked a combined 99 times over the past two seasons, the worst back-to-back poundings of his career.

Obviously all teams are operating under the same constraints. But Brown, 35 Aug. 3o and entering his 13th season, has plenty to do to get his massive self ready besides doing the dad thing at the virtual shop.

“I’m doing what I can now virtually, over texts and phone calls, just to try to build as much chemistry as possible until we’re able to meet physically,” he said. “We’ll have a small window to build each other up as much as possible.

“For rookies having no introduction at all to the NFL, not being able to be in a facility, to be around players, to be in actual meetings and workouts, to see how we go about our business” is hard.

The four veteran free agent signees (Brandon Shell, B.J. Finney, Cedric Ogbuehi, Chance Warmack) “have been around, but it’s just a different culture from whatever team you were on. Everything is different. You just don’t have a feel for how things go,” he said. “But that’s the position we’re in, so we have to make do.”

Much deservedly has been said about the off-season need to fix Seattle’s defense that was among the worst in coach Pete Carroll’s tenure. But the O-line’s shortcomings were masked to a degree by Wilson’s frequent feats of magic, and a defense that tied for third in turnover ratio at +12. Only one team recovered more than Seahawks’ 16 fumbles, surely the most random of measurable actions in the NFL.

The O-line’s subsequent upheaval was not necessarily an indictment of play; the Seahawks did finish ninth in scoring.

“I don’t think we’ve been horrible up front,” he said. “A lot of decisions had to be made. We had a couple guys that were entering free agency. Could be salary-cap casualties. I miss the guys that are no longer here. But it’s a business. I’ve been in it long enough to know that I don’t take anything personal.”

Brown reported no further surgeries on the bicep tear that slowed him mid-season, nor the right knee that needed arthroscopic surgery in December and cost him two games, including the first playoff game. He said he changed up his off-season routine by reducing some weightlifting and adding flexibility exercises, including yoga.

The main health question for Brown and all NFL players is how the league and players association plan to navigate the virus that isn’t going away.

“I think we will be OK playing. I don’t know about packed arenas; that could get a little bit risky, or very risky. But I think we we could find a way.”

The same could be said for the O-line makeover. In May, both seem iffy propositions.