Plotting a comeback on the field, Seahawks’ second-year DE L.J. Collier also wonders how many more African Americans must die at the hands of police. 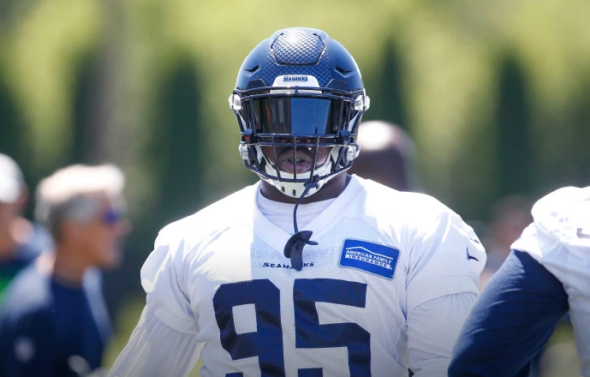 DE L.J. Collier is recovered from a rare foot and ankle sprain that ruined his rookie season. / Seahawks.com

We interrupt this sports column to discuss what cannot be unseen even by the most ardent sports fan seeking shelter from the storm of bad news.

“At what point,” said Seahawks DE L.J. Collier Friday morning, “do people have to continue to be killed, just for somebody to understand what being black is like?”

Collier was on a Zoom conference with Seattle sports reporters. As one of the more mysterious figures in the Seahawks 2020 roster, he talked easily about his rookie year mostly lost to injury, and his plans for redemption. That can be read below.

He was also asked what he thought about the past four days in Minneapolis, rent asunder following the murder of a handcuffed, prone African American man by four policemen in broad daylight on a public street.

The astonishingly avoidable death of George Floyd was recorded on a cell-phone video that has become the view across the globe of an America staggering in the middle of a pandemic while also bleeding heavily from the latest self-inflicted racial wounds.

“This is what we go through every day, that being pulled over, you don’t know what’s gonna happen,” said Collier, a member of a sports league whose rosters are 70 percent black. “Nobody wants to live with that . . . what do we have to do for you to hear us? It’s just a sad thing.

“I wish it would have been handled better. I feel like this should open doors to help people understand what’s going on in this world —  how people of color are being oppressed.”

At 24, Collier isn’t old enough to recall that the same sentiment was often expressed following six days of riots in Watts in 1965 after a clash between Los Angeles police and unarmed black motorists after a traffic stop. He’s not even old enough to remember the same neighborhood was plundered in 1992 after four officers were acquitted of assault despite video of them beating Rodney King, an African American driver stopped for suspected DUI.

But he is old enough to have heard, “I can’t breathe” twice in five years from black victims, investigated for misdemeanor crimes, in the hands of police who suffocated them on the street. The first was the 2014 death of Eric Garner in New York.

These and many other episodes were followed by lamentations, promises and protests, including those before NFL games, begun by then-49ers QB Colin Kaepernick.  Kids younger than Collier have many examples from which to choose in deciding whether doors have opened.

According to the manager of the store Floyd visited just before his death, the forgery complaint that prompted the call to police was over a $20 bill that he may or may not have known was counterfeit. Vanita Williams, who knew Floyd and witnessed his death, told BuzzFeed News he had been hospitalized with COVID-19 last month and had just recovered.

“He survived corona,” she said, “and couldn’t survive going to the store.”

The torching of a police precinct headquarters and the the looting of neighborhood stores in Minneapolis Thursday night were the ghastly results of the rage following Floyd’s death, plus the subsequent delay in the arrest of the officers who were fired within 24 hours of the episode.

Prosecutors obviously have an investigation and a protocol to follow, but they missed an opportunity to forestall the worst reaction, had the cops been charged and arrested more quickly with a lesser crime such as negligence or assault, ahead of the longer murder investigation.

The mistake was oxygen to fuel the Thursday night riot, abetted early Friday morning by the Arsonist-in-Chief.

President Trump, who in 2017 called NFL players who protested police brutality “sons of bitches,” described in a tweet the Minneapolis rioters as “thugs,” and threatened to use military force to gun down fellow Americans, because “when the looting starts, the shooting starts.”

The reprehensibility of the tweet was industrial strength on so many levels. But rather than me explain it, let’s turn to a formidable Trump ally, Rush Limbaugh.

On his radio show this week, Limbaugh praised Trump for being “clever” for throwing out baseless conspiracy theories, such as the claim that the 2001 death of a legislative staffer for Joe Scarborough, then a congressman and now an MSNBC anchor often critical of him, was not an accident but a murder covered up.

Limbaugh claimed that Trump didn’t say it was true, but was merely repeating what was said by others.

Well, even some of Trump’s most non-leftist defenders failed to see the cleverness, including Sen. Liz Cheney telling Trump to “stop it.”

But Limbaugh’s description of Trump “having fun watching the flames” was an unintentionally apt descriptor of the president’s reckless impulse to call on soldiers to join police in killing Americans in Minneapolis.

The more that Americans are pitted against Americans, the more Tump believes it helps his re-election chances. He enjoys the flames of conflict. Unquestionably an igniter and not a uniter, Trump made a horrible situation in Minneapolis worse.

Collier’s aspiration to turn tragedy into opportunity is admirable. As it has been for years. But nothing lately suggests the corner is coming. Our fractured culture remains a round building.

Speaking from his home in the Dallas suburb of Frisco, Collier was persuaded that his second season in Seattle — after being labeled unfairly as a first-round draft bust — will provide a stark difference.

“I’m out there to prove that I’m one helluva football player, and I’m going to show them that this year,” he said. “I didn’t have the type of year that everybody wanted me to have, so it kind of shifts you off to the side. I felt very disrespected.

In the first week of training camp in July, Collier (6-3, 291 pounds) had an ankle and foot sprain coach Pete Carroll called “rare,” and was sufficiently severe to ruin his season. He got in 11 games, but only as a rotational guy, for 152 snaps. He had three tackles. He was a healthy scratch for five games.

Not what the Seahawks foresaw for a guy taken 29th overall from Texas Christian.

Collier conceded he may have rushed his return.

“I was definitely 100 percent; I got to where I could play,” he said. “I thought there were times where maybe I should have waited longer. But I wanted to play.”

With one of the worst pass rushes in the NFL with Jadeveon Clowney in 2019, it is imperative that Collier come through in Clowney’s continuing absence. The Seahawks see for him a role similar to that of DE Michael Bennett, who played early downs on the outside, then moved inside on third down, when the Seattle defense owned the NFL.

“It’s  inside and out — I’m excited for it,” Collier said. “I’m athletic guy and I know what I’ve been doing inside with my quickness and my strength. Whatever I can do to get on the field.”