LB Bobby Wagner took to the streets to see for himself. He discovered racism and covid-19 are alike: They sicken many, kill some and there’s no vaccine for either. 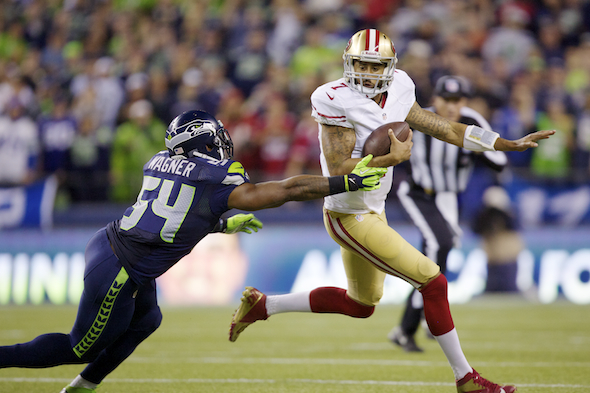 When it comes to speaking out on racism, Seahawks LB Bobby Wagner is on the same side with  QB Colin Kaepernick. / Drew Sellers, Sportspress Northwest

Bobby Wagner had to see for himself. So the Seahawks’ second-most important player went to Seattle’s riot downtown Saturday.

“I wanted to feel the energy, I wanted to see for myself what was being portrayed,” he told a Zoom conference of Seattle reporters Monday. “A lot of focus is on the looting and stuff but we’re not talking enough about what the black community is tired of.

“You guys in the media play, I think, a pretty big part of the narrative in what’s going on right now.”

Among the things he witnessed was a march that began peacefully protesting the murder by Minneapolis police of a prone, handcuffed black man who was asphyxiated on a public street by a knee to his neck while three other cops watched. The three remained free, while one cop was charged with murder.

But the march quickly devolved into chaos when Wagner said a group of white men torched a Seattle police vehicle, one of at least a half-dozen subsequently destroyed.

“I watched black people try to stop them from doing that, but it just wasn’t happening,” he said. “Then (it) got to a point where I felt like it was unsafe for me to be there. So I left.”

Rage over the homicide of George Floyd spread disastrously across America and continues around the globe. Its source, the scourge of systemic American racism, has something in common covid-19: It sickens many, kills some and there’s no vaccine.

The intensity of the toxicity was sufficient by Monday, a week after Floyd’s death, that the Seahawks’ daily “practice” by Zoom video was scrubbed of football, replaced with a vent session for players, according to Wagner. Knowing the disposition of coach Pete Carroll for encouraging player expression, it was no surprise.

“I feel like our organization has always done a great job of just being open to having the conversations,” Wagner said. “We did not speak about football. We focused on what was going on in the world. We gave anybody an opportunity to express their emotions,  their anger  — whatever it was they’re feeling.

“At the end of the day, life is bigger than football.”

That life feels so much more precarious in the African-American community. Wagner, voted this off-season to NFL.com’s All-Decade first team, felt compelled to illuminate the point by beginning his media session, which he requested be moved up to Monday, with his own remarks, answering questions later.

He recalled a recent conversation with someone who said, “‘You know what, I’m afraid to have have a black child because I don’t know how they’re gonna be treated in this world based off their skin color.’

“That’s not a position anybody should be in. I don’t have all the answers, not even knowing if what I’m saying is coming out perfectly. But I do know that we need to educate ourselves . . . I’m hurting and pissed off like everybody else. I’m tired like everybody else.

“I challenge you guys to educate yourself on what it’s like to be black in America.”

Floyd’s death was the latest lesson, but we seem to be slow learners. Then-San Francisco QB Colin Kaepernick tried to explain it to an NFL audience in 2016. It cost him his football career. In light of current events, he offered fair warning, and it was ignored.

“I feel like if you screenshot this moment right now,” Wagner said, “and go back in time and play it, I don’t know if it looks any different.”

Kaepernick’s quiet kneeling during pre-game national anthems as a protest against police brutality was co-opted by critics, notably including President Trump, who twisted the issue into disrespecting the flag. They ignored the howling irony of the flag’s origins in protest, and its symbolism as independence from tyranny, foreign or domestic.

In the Washington Post Saturday, columnist Sally Jenkins captured well another irony: Which knee action would we choose now — Kaepernick’s in the grass, or the cop’s in Floyd’s neck?

When Trump in September 2017 called Kaepernick and other NFL pursuers of social justice “sons of bitches” who should be fired, the Seahawks were flying to a road game in Tennessee. On a Saturday devoted to political rage instead of football prep, the Seahawks, despite objections from some players, decided to stay in the locker room for the anthem Sunday. They also issued a statement:

“Even when we talk back about what was going on (in 2017),  the first thing that comes out of (critics’) mouths is ‘flag,'” Wagner said. “It was never really about that. It was about situations like this, where the black community is not being treated fairly, and the people that are harming the black community (are) not being held accountable.

“I supported them then. I support them now.”

Wagner was not shy about Trump’s crisis management.

“What’s the point in having a camera and watching someone murder someone (if) they’re not gonna be held accountable for their actions?  I don’t want that to be something that we get used to.”

A couple of years ago, Wagner, a Los Angeles-area native, had a meeting with Kareem Abdul-Jabbar at Seattle University when he was town to promote his 11th book, Writings on the Wall: Searching for a new equality beyond black and white.

The leading scorer in NBA history has a long history of social consciousness and activism, starting in 1968 when then-Lew Alcindor declined to participate in the Olympic Games in Mexico City because of the U.S. war in Vietnam and the laggard pace of the civil rights movement. He was selected in 2012 as U.S. Cultural Ambassador.

“Seeing him inspired me to be more active than I was in the community,” Wagner said. “We sometimes don’t see what the older athletes had to go through for us to be in the position that we’re in right now.

He really challenged me to go back and try to understand.”

To help us understand, here is a short passage from the book on racism.

The poet Charles Beaudelaire wrote: “The Devil’s best trick is to persuade you that he doesn’t exist.” The metaphor is clear: Not seeing the evil lurking in our lives allows us to unknowingly succumb to that evil’s influence. The problem is that everyone thinks they can see evil coming and are therefore protected. And that’s exactly how the devil wins. Racism is one such evil that seems invisible to those who don’t experience it daily and who don’t feel racist in their hearts. But just because we turn the channel when it shows starving children in Africa doesn’t mean those children aren’t still starving.

In this case, the pundit and the politician’s dirtiest trick is to persuade white Americans that racism doesn’t exist so that it can continue to fester among those whom they don’t care about anyway. They dismiss the black community’s concerns and reduce their hope for meaningful in change. Not that far from slavery after all.

Change doesn’t come out about merely from complaining or even from being morally right. It comes from focused, persistent, intense confrontation of the problem. Remember that the most effective improvements in civil rights have come about from blacks and whites working together. That is the America we are meant to live in.