Saints QB Drew Brees stepped in it big time this week. Seahawks QB Russell Wilson stepped around it. When pro sports return, the locker rooms will be difficult. 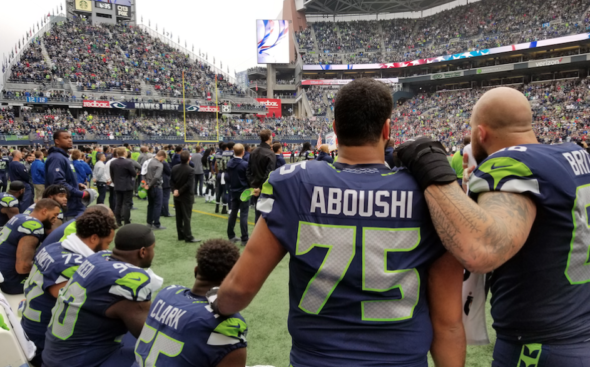 Justin Britt (far right) and fellow Seahawks O-lineman Oday Aboushi joined black teammates who sat on the bench at the Clink during the national anthem, protesting police brutality and social injustice, during a game in 2017. / Drew McKenzie, Sportspress Northwest

When Russell Wilson was asked this week about his response to Drew Brees’s video interview remark that he “will never agree with someone who disrespects the flag,” the Seahawks quarterback said he’d just come from a meeting and didn’t get to “watch the whole thing.”

Actually, there wasn’t much else in the interview with Yahoo! Finance to see, other than to observe the venerable New Orleans Saints quarterback fall figuratively into the cultural abyss.

Wilson continued with a sincere if rambling answer that finally credited former 49ers QB Colin Kaepernick, initiator in 2017 of the kneel-down protest against police brutality, for “trying to symbolize the right thing, and people may have taken that the wrong way . . . standing up for his kids and everyone else’s kids who are African American.”

Amid a national convulsion that confirmed Kaepernick’s 2017 complaint was tragically accurate, Brees appeared oblivious. Violinists on the Titanic were less tone-deaf.

Among his most poignant critics was Eagles CB Malcolm Jenkins, a teammate of Brees for Jenkins’ first five years in the NFL. The two-time All-Pro posted to Twitter a video in which he said Brees was “part of the problem . . . you don’t understand how people can experience the same thing totally different than you.”

I recorded a few videos when thinking of how to respond to Drew Brees, I don’t take any of it back-I meant what I said-I removed the 1st video because I knew it be more about the headlines. I want people to understand how those of us struggling with what’s going on feel pic.twitter.com/T054qt0YEz

Stricken and mortified by the backlash, Brees apologized on social media Thursday, first by words on an Instagram post:

I would like to apologize to my friends, teammates, the City of New Orleans, the black community, NFL community and anyone I hurt with my comments yesterday. In an attempt to talk about respect, unity, and solidarity centered around the American flag and the national anthem, I made comments that were insensitive and completely missed the mark on the issues we are facing right now as a country.

They lacked awareness and any type of compassion or empathy. Instead, those words have become divisive and hurtful and have misled people into believing that somehow I am an enemy. This could not be further from the truth, and is not an accurate reflection of my heart or my character.

When that apology explained only that he was sorry, he tried to quell the skeptics with a second try, this time, he said, so people could see his eyes and get a promise of action.

“Step-by-step you will see my heart for exactly what it is and the way everyone around me sees it,” he said. “I’m sorry it has taken this long to act and to participate in a meaningful way but I am your ally in this fight.”

Brees, who led New Orleans to a Super Bowl win, has been one of the NFL’s most respected figures. He has given much time and money to numerous charities and causes, notably in the 2007 recovery from Hurricane Katrina, helping re-create parks, academic facilities and mentoring programs for kids through his Brees Dream Foundation.

Which only adds to the gravity of the seeming betrayal.

Meaningful action following the Brees apologies will help, and it’s easy to imagine Wilson accepting Brees’s regrets. Then again, who knows? In his Zoom conference with reporters this week, the depth of Wilson’s despair over what he called the “hate in America” was striking. He has almost always kept his professional distance from controversial social and political issues.

A little-discussed outcome of the racial drama roiling American streets is how it will play out in pro locker rooms, if and when seasons begin.

Politics tend to be marginalized, often by management urgings. But the depth and breadth of the rage fueling Black Lives Matter following George Floyd’s murder by Minneapolis police suggests that no one gets to stay neutral, or even quiet. Usually,  right-wing views have some fans on most, if not all, rosters.

As Seahawks LB K.J. Wright put it this week in his Instagram post, “Time for some uncomfortable conversations.”

The previous theory is that the unity necessary to be successful in pro team sports will cause  political tension to be sublimated. But there’s no rule precluding political/social contempt for a teammate, particularly these days, when even the choice to wear a mask is more of a political statement than merely a simple matter of public health.

Given the bewildering pace of ominous news these days, the case can be made that in two weeks, whatever Brees said or did will have been forgotten by most people. But not everybody.

Kaepernick “can still play some football, but he stood up for something that’s way greater than football,” Wilson said. “That’s people’s lives.”

Spoken less like a QB than like a dad with two kids and a third on the way.

American life, including sports, is fraught with uncertainty like no time since the Vietnam War. Two weeks ago, would you have imagined any sports narrative that had Kaepernick the hero and Brees the villain?