Thiel: Kap had the guts, Bennett had a moment 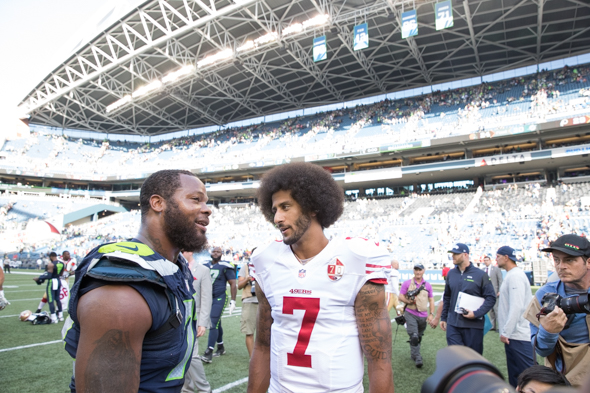 New Seahawks RB Carlos Hyde Monday suggested that the NFL could demonstrate its new-found belief that black lives matter by ending the de facto exile of Colin Kaepernick. He elbowed the NFL hard in the ribs in 2016 to draw attention to police brutality and social injustice. Lo and behold in 2020, the league and America appear to get it now, although Kaepernick hasn’t played since.

“I think the NFL can start by signing Kap back,” Hyde said in a Zoom interview with Seattle reporters, his first since leaving Houston in free agency for a one-year, $2.75 million deal. “That’ll show that they’re really trying to move in a different direction. Because Kap was making a statement four years ago about what’s going on in today’s world, and the NFL didn’t bother to listen to him then.”

Beyond that, however, Hyde, who was with Kaepernick in San Francisco from 2014-16, is, as are many people, hard-pressed to come up with tangible action steps beyond the gesture.

If Kaepernick, 32, wants to come back, and a team thinks he can help, that would be great. But if the NFL were to somehow force a team to employ him largely as a backup QB but also as a sort of national cultural symbol of sudden wokeness, the clumsy situation is destined to be untenable.

Every play he did or didn’t make, every move the club did or didn’t make, would be over-scrutinized for meaning. Every local and national story involving police and race would create demands for non-football interviews of Kaepernick. And since his teammates’ careers to some extent depend on winning games, the distraction would be noteworthy.

The chance is strong that things would deteriorate into something no one wants — tokenism.

But if Kaepernick remains perversely radioactive to the NFL, what can the league, its players and fans do — other than the NFL’s default position of throwing money to make problems go away — to make tangible progress?

I have an idea. Actually, it’s more of an experience Michael Bennett had that I’m suggesting might have some modest curative powers.

In 2018, the then-Seahawks defensive end wrote a book, along with Dave Zirin, sports editor of The Nation, called Things That Make White People Uncomfortable. It’s part memoir and full Bennett, funny, articulate and profane, but importantly a painful, poignant essay on being a black man in America — and one with a wife and thee daughters to keep his ass ever-so-slightly humble.

Bennett, a key member of Seattle’s Super Bowl champs, writes about the tumult around the Seahawks’ game in Tennessee on Sept. 24, 2017. Prior to the weekend, President Trump launched his race-baiting fusillade against players who knelt during the national anthem to call attention to police brutality and social injustice — the Kaepernick touchstones.

In a speech, Trump called the protesters sons of bitches who should be fired.

Instead of game prep, the Seahawks spent Saturday at the hotel talking, and arguing, among themselves, about how to respond. By Sunday, they released a well-crafted statement that didn’t address Trump but said as a team, they would sit out the pre-game ceremonies and continue to “oppose those who would deny our most basic freedoms.”

The Titans? They were bewildered, but when they heard the Seahawks’ plan, said, “Us, too!” and stayed in their locker room as well.

The Seahawks lost, 33-27, and the episode became a big part of the national protest  story Monday. Heading the next week to practice at the team facility in Renton, Bennett was about to turn into the driveway when he saw a small group of fans, including self-described military veterans, carrying flags and signs protesting the players’ protest.

Bennett, who comes from a military family, paused. Then he shut the engine off and got out. Here from the book is his description of events:

I’ll admit it was a little scary, because I didn’t know if they had guns. But I saw them protesting, and I was just like, “Fuck it, let’s talk.” At first they were shocked. I don’t think they were expecting to be talking with players when they showed up to the facility with their flags and signs, but it was cool. We just shared our experiences. We talked back and forth about where we disagree, yet how we want the same things, and what the flag means to them. They said I could never understand what they’ve been through as military veterans. But they also admitted, with a great deal of humility, that they could never understand what I’ve been through as a Black man in America. I also explained — and I can’t repeat this enough — that these protests aren’t about the military, and they should not believe anyone who says otherwise. The vets said they understood all that; they just wished we didn’t disrespect the flag. I told them we did not disrespect the flag — we’re trying to honor what the flag is supposed to represent. And, kind of like an after-school special, we expressed to one another how we could understand what it means to be human, with a need to protect our families.

Then another woman pulled up. She was bawling her eyes out because she was driving by and saw the protest signs and flags, and us talking with emotion. She said she was caught between the old and the new; she loved the Seahawks but didn’t want anyone in the military to feel bad. She wanted to respect the military and also support equality. We ended up talking for 20 or 30 minutes. Nice lady. I am glad she pulled over, for safety reasons alone. (Don’t ever sob and drive. That’s dangerous.)

But I was ready for it. Throughout this experience people have been coming up to me, very emotional, saying, “Thank you.” Black and brown people who have felt the sting of inequality; white people who are wrestling with these injustices for the first time, crying as if they’re newborn, angry at the world they’re seeing now that they’re out of the womb; and yes, vets who have said to me that military personnel are divided in their opinions as much as anyone else, and they didn’t want me to cave into the bullshit . . .

For all the people who say they hate me and want me out of this country — which my family’s blood and sweat built from the ground up — there are more people who sympathize with what we’re all trying to do, who want to see a better world.  I treasure this time, because it’s like water in a canteen, and in the future when my throat is dry, I’m going to remember all these people, and keep pushing forward.

Was a difference made that morning? Can’t know, except that Bennett will never forget it. But at this moment, the same can be said for the protests over George Floyd’s murder that have roiled many American cities and capitals around the world. And I think those Renton protesters enjoyed their pepper-spray-free experience more.

I like the idea of taking Bennett’s spontaneous sidewalk parley off the curb and making it a thing, sliding it into a meeting room in a library, or a church or a restaurant (should any of them open again).

I’d like to see Bennett, or any two or three Seahawks players who are comfortable public speakers, join up in a room small enough to not need a microphone or a podium. They would meet 15 or 20 people like those Bennett met: Skeptics willing to listen. Ideally, the crowd would include one law-enforcement person and one Snohomish County fella big of beard and belly, both unarmed and off the job.

Some rules are necessary: No one wears insignias of any sports team. No autographs. No selfies. No looking at phones. No fan drooling. No player scoffing. Also: No “handlers” from the team. No union managers. No politicians. No media to filter sentiments into a 30-second sound bite. No Zoom.

People to people. Face to face. Er, mask to mask. Once a week, for a season’s 16 weeks (if the other pandemic allows).

Is it too small to work? Maybe. But participants are allowed post-meeting to share their thoughts with the social media world. I’m betting on good news. Besides, we’ve been at this racial inequity thing for 400 years. Any progress is welcome.

Lots of details remain. But I’m certain of the name. I’d call these sessions what Bennett called his first one.