Pandemics of coronavirus and racism, a failing federal government, raging unemployment leading to a depression, and MLB can’t figure out how to play nice. D’oh! 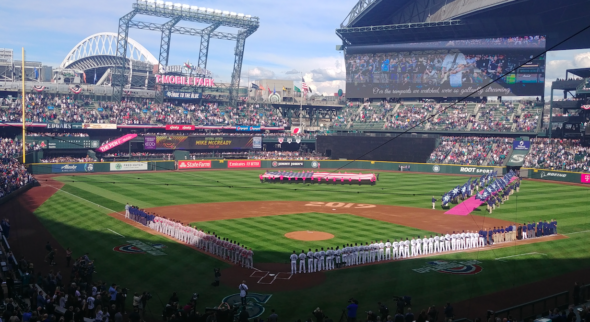 In case you forgot what Big Pink was supposed to look like for Opening Day. / Art Thiel, Sportspress Northwest

We sentimentalize and romanticize baseball like no other American team sport.  Maybe that’s why we keep giving it the freedom to break the collective sporting heart. We can’t seem to quit on it.

But now might be the easiest time yet to slam the door off its hinges.

The latest moment of relationship dysfunction came Saturday, when what seems to be the final attempt at reconciliation failed. To start a truncated season, the owners made a half-hearted compensation offer they knew was weak. The players union indeed scorned it, sneered and essentially said, “Do your worst!”

So, unless owners swoon this week, the worst will be a forced season of 50 or so games that neither side wants, played to empty houses amid pandemics of coronavirus and racism, against a backdrop of massive unemployment and a failing federal government during a recession heading toward depression.

Take me out to the ball game. Like hell.

MLB would need a 60-story elevator to get up to forlorn.

MLB’s latest proposal called for a 72-game season starting July 17 and guaranteed the players just 70 percent of their pro-rated salaries that were agreed to by the parties March 26. The union also agreed to allow MLB, in the event of an impasse in future negotiations, to declare unilaterally a 50-game season.

That is what the union said Saturday it was willing to accept.

“It’s time to get back to work. Tell us when and where.”

Never has there been a thud duller than those 12 words to start a baseball season.

Even Buster Olney of ESPN.com, one of the legion of romanticists in baseball journalism, wrote that the industry is becoming “a punchline for sports dysfunction with antecedents like “Knicks,” “Tonya Harding” and “butt fumble.”

Since the owners refused the union request to disclose their financial books in order to justify the pay cut, the owners get to wear the villain’s cape in this episode.

It is the players who are being asked to risk their health to play in a cumbersome, unprecdented safety net while the virus shows resilience against the weakening American resolve to follow the CDC recommendations.

And it’s not just the virus. The hasty “spring” training and compacted regular season will inevitably produce more injuries because of lessened conditioning.

If the failed negotiations weren’t enough despair, two unresolved issues stink like the fetid air above the sulphur mud pots in Yellowstone.

The Houston Astros still have to make the rounds of ballparks to be pilloried after a electronic hijacking of signals over a couple of years that should have invalidated their 2017 World Series, but did not (kinda forgot that scandal, yes?). Nor did a single player draw punishment.

Commissioner Rod Manfred’s relative helplessness over the affair suggests strongly that parts of the industry are ungovernable. Here’s hoping Manfred can figure out who’s pilfering the sunflower seeds.

Then there’s the imminent destruction of a big chunk of minor league baseball. Before the virus, MLB was about to execute 40 of the 162 minor league teams that populate small to mid-size towns across America. It was billed as a cost-saving move, but I thought that’s what they’ve been doing by paying most minor league players $400 a week for years.

The situation was so pathetic, especially for foreign-born players stuck in the U.S. because of travel restrictions, that several major leaguers picked up some salaries when clubs like the Nationals and A’s stiffed the kids.

The litany of ugliness is all current stuff, and doesn’t take into account the history of work stoppages over labor issues that took games out of seasons in 1972, 1981, 1985, 1990 and 1994-95. Nor is there any calculation of future damages to revenues from the failure to bargain in good faith.

We all understand that the problems of baseball are trifling compared with the cornucopia of crap being delivered to many. But how does baseball allow itself to be so oblivious?

After decades of mistakes, missteps and mistrust, baseball appears be at the same place when Homer Simpson had his first and only moment of true self-awareness:

“Lord help me, I’m just not that bright.”