With the federal failure to set national protocols, college football is the sport that will have the hardest time against the virus. And be hurt the worst financially. 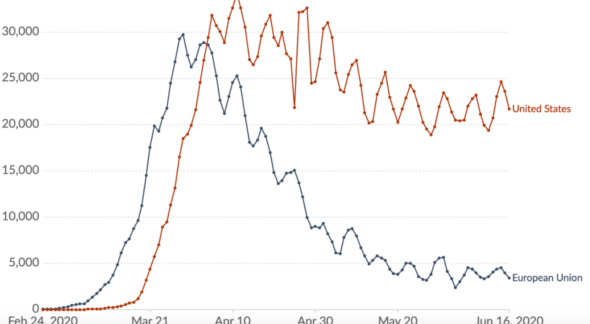 The predictable sharp uptick this week in confirmed coronavirus cases in states that were earliest to re-open is scary for public-health officials as well as regular folks  partial to a little science and history. For those who propose to put on big-time team spectator sports in the fall, the news has the needle on the pucker meter nearly pinned.

Particularly so for the sports that are sufficiently daring/foolish to try to play in home stadiums in a country with likely the world’s worst pandemic management.

As you can see from the chart created by the European CDC, the European Union, with 440 million people, has done a far better job of reducing the caseload of covid-19 cases than the U.S. (330 million).

Obviously, there’s time to regain some control of the curve before September, but there’s zero indication that President Trump and millions of Americans are willing to sustain the initial effort.

Said CNN medical expert Dr. Sanjay Gupta Friday, “It sure feels like we’ve given up.”

Sports enterprises, however, have not. They’re just beginning.

The no-spectator, bubble concept that the NBA, WNBA, MLS, NWSL and NHL are expected to try, cumbersome as it will be, at least has a small chance of working. But baseball, should it ever get out of its own way, proposes a truncated home-park season, and football, pro and college, have similar ambitions, only for entire seasons.

There’s no doubting the righteousness of trying. Its what sports leagues and any businesses must do. But there’s a place at the table for realism.

Dr. Anthony Fauci, the highest-profile member of the White House Coronavirus Task Force that Trump is trying to make disappear, like a miracle, made it clear he thinks home parks are an implausible idea — at least for the collision sport.

“Unless players are essentially in a bubble – insulated from the community and they are tested nearly every day – it would be very hard to see how football is able to be played this fall,” Fauci said in an interview with Gupta this week.  “If there is a second wave, which is certainly a possibility and which would be complicated by the predictable flu season, football may not happen this year.

“I hope that’s not the case, but if football does come back this fall, it will likely look very different.”

Nowhere will it look more different than college football. It is the sport most critically addicted to cash, because football and men’s basketball revenues are needed to fund all of the non-revenue sports at major state universities. There’s no billionaire owner to absorb the hit.

A self-sustaining athletics department is crucial to keep it off the back of the general-fund budget of every school, all of which have their own covid-19-related financial crises on the academic and administrative sides.

Even though most big-time athletics departments get the majority of annual revenues from media-rights fees, they can’t get close to break-even without ticket and related revenues from live attendance. Even when things were good, less than 20 percent of the 130 schools who play on the NCAA’s top shelf were operating annually in the black.

Things no longer are good.

Most conferences are working out models for home stadium capacities at 50 percent and 25 percent. But the likely model is zero attendance. It’s hard enough to invent a hygiene and testing protocol that works for all athletes at all schools all the time, much less regulating fans in 60-plus stadiums each fall Saturday.

“This is the big problem with college sports. It’s just a lot more feasible for professional sports because they have the resources to implement a lot of these procedures and protocols, which will give the best chance of lowering the risk of outbreaks,” said Jill Weatherhead, assistant professor of infectious-disease and tropical medicine at Baylor College of Medicine.

She was quoted in a Washington Post story Friday that surveyed all 65 schools in the Power 5 conferences for their policies and practices. The conclusion was that not only was there no consensus plan — the NCAA, like the Trump administration, offers no help — there’s not yet agreement between schools and conferences on something as simple as whether to test players more than once a week.

“This is a highly transmissible virus … and we do know that with just a single case that’s not necessarily symptomatic, in high-risk settings, it can spread explosively,” Albert Ko, an infectious-disease epidemiologist and professor at the Yale School of Public Health, told the Post. “There’s actually a question and debate of whether you should test twice per week.”

Athletes have been returning to campuses around the country and are being tested, many for the first time. Friday night brought news that at Clemson, where 323 tests of athletes yielded positive tests, a whopping 23 belonged to football players.

That was after Texas announced 15 football players tested positive, and Kansas State had eight. Some schools quit disclosing, some are refusing.

At the University of Washington, according to Dan Raley at si.com/Maven, the medical staff Monday tested its first 80 athletes and had no positives. Good for the Huskies. But they have about 650 athletes. The shutout seems unlikely to last.

Public health and sports officials all expect some positive tests at every school. The global data so far shows that young people often have mild to no symptoms, and deaths are relatively rare. But why covid-19 hits some in the same cohort harder than others remains one of the disease’s great mysteries, as does its easy transmission to older family, friends and coaches.

The key is managing the cases via quarantine so that infection doesn’t spread. But that  job gets exponentially harder if the visiting team comes from region or a school that has different protocols than the home team.

The Post story quoted anonymously an administrator from a major program as saying the absence of uniformity may be the issue that dooms the college season.

“The big problem here is we can put together the best policy in the world, but if they’re doing something different over in Texas, or Florida, can we really travel there and play a game?” he said.

Remember a few weeks ago when sports leagues were plotting to re-start seasons and git’em done quickly ahead of the much-predicted second wave of covid-19? America came up with a clever work-around — never leave the first wave.