A racist put a noose in the garage of NASCAR’s only black driver. Bubba Wallace and his fellow drivers answered. Maybe there is a future without Confederate flags. 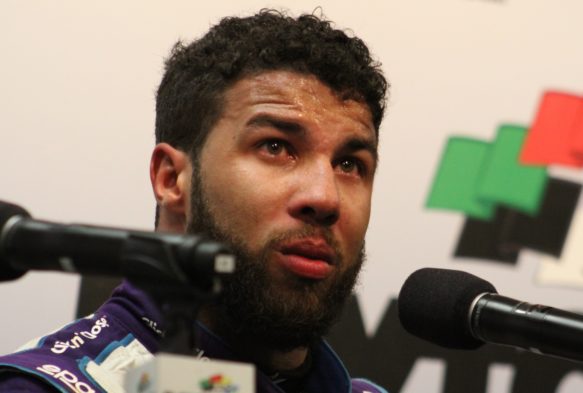 Bubba Wallace, here in 2018, had a good day Monday after a bad Sunday at Talladega. / Zach Catanzareti via Wikimedia Commons

Update: NASCAR said Tuesday afternoon that the FBI determined that driver Bubba Wallace was not the victim of a hate crime because it learned that a pull rope fashioned like a noose had been on a garage door at Talladega Superspeedway since as early as October. That was well before Wallace’s team was randomly assigned stall No. 4 ahead of the Talladega 500 race over the weekend.

While angered at those saying it was all a hoax and that NASCAR overreacted, Wallace said Tuesday night that NASCAR did nothing wrong in its handling of the situation when his team alerted NASCAR to what it found. “I stand by Steve (Phelps, NASCAR’s president),” Wallace told CNN’s Don Lemon. “I stand by NASCAR. This will not break me, none of the allegations of being a hoax will break me or tear me down. Will it piss me off? Absolutely. But that only fuels the competitive drive in me to shut everybody up.”

Ahead of an NBA playoff game between the Rockets and the Sonics, I was among a group of writers in Houston’s Summit that sat down randomly together for a pre-game meal. I don’t remember which game, although the mid-1990s games between the Gary Payton Sonics and the Rockets led by Hakeem Olajuwon were the acme of pro ball in its 41-year tenure in Seattle. Makes my neck hairs stand up typing this.

We started talking about food, and I said something about how much I enjoyed Southern cuisine, although my enjoyment of a meal the night before was diminished by the presence of a Confederate flag on the menu.

“What do you mean?” said a sportswriter to my right.

“What do you think I mean?” I said, realizing we were done with the easy banter.

“The flag isn’t about slavery,” she said, indignantly. “It’s about our heritage.”

“You’re not going to start with me about ‘states rights’ too, are you?”

“You Yankees come down here with fixed ideas about us and don’t want to hear about what our heritage means to us.”

“You’re entitled to your heritage, but I don’t get the part about re-writing history to suit yourself.”

At that, she picked up and left. I felt bad for spoiling her meal, but it was the first time I personally encountered the “heritage” claim.

I’ve since seen the rationalization rolled out countless times. I was sure that the flag’s ubiquitous place in a part of the country that seemed to me largely to have chosen, after committing treason, to sit out the cultural changes of the past hundred-plus years, wanted it that way. I’ve since learned the stereotype was unfair to many.

Nevertheless, the inherent racism behind the symbol erupted again this week, following NASCAR’s decision to ban the flag’s display at all of its events. The gesture was momentous. It signaled from the industry’s ownership on down that the toxic relic was no longer welcome at a sport that is a close second to college football in terms of the South’s regional sports identity.

Hey, NFL fans — imagine Dallas Cowboys owner Jerry Jones signing Colin Kaepernick to back up starter Dak Prescott, then kneeling with him during the national anthem. That’s was the equivalent social earthquake felt by many Southern racing fans.

I’m no NASCAR aficionado, but anyone around sports understood that the backlash would be fierce to the decision a couple of weeks ago. As the next race in the series drew close, the Talladega Cup 500 Sunday, TV news crews dutifully recorded the huge uptick in sales of flags and related trinkets around the Alabama track. When the purchasers and store owners were interviewed, there was that word again: Heritage.

Yet that same heritage is horrifying to other people of the South who were exploited to preserve it.

As someone recently wrote, the “heritage” crowd hangs on tighter to the flag than Scarlett O’Hara did Tara.

Sunday, as the maximum of about 5,000 fans were allowed in to watch — the first spectators, all socially distanced, in the Cup Series this season as the sport re-opens — a small, unmarked plane flew over the superspeedway trailing a banner, “Defund NASCAR.” Cars and trucks on the roads outside the track were similarly festooned.

After the race was postponed by rain until Monday, the real insult was disclosed.  In the garage of Bubba Wallace, the only Black driver in the NASCAR series, someone Sunday left a noose.

Wallace didn’t see it, but a crew member made the discovery and took it to NASCAR officials. Day one of the new day of race in racing had not gone well.

Outraged that someone on the inside was the perp — the infield garage has no public access and is tightly secured — NASCAR raged in its statement:

NASCAR statement on a noose in the garage stall of Bubba Wallace: #nascar pic.twitter.com/rhBpywQ288

An investigation that includes FBI agents is underway.  NASCAR president Steve Phelps said those responsible will be permanently banned. Wallace tweeted about his anger and his resolve.

Bubba Wallace has a message for the person who left a noose in his garage stall. pic.twitter.com/asAc8hTTx3

The race finally went off Monday. Before it started, someone took white paint to write “We stand with Bubba” in large letters in the infield grass. The 39 other drivers gathered together and agreed to walk Wallace and his Richard Petty No. 43 Chevrolet Camaro to the head of the line for the anthem. They were followed by their crews.

As statements go, it was potent.

We are one family.

The show of solidarity included the team owner, the fabled Petty, embracing Wallace, who finished 14th, a half-second behind winner Ryan Blaney. Wallace led with 27 laps to go, and was in the top five with five laps to go, then ran out of gas, he said.

After getting out of his car and running across the track to greet fans chanting his name, Wallace called it a win.

“The stars didn’t align for us completely but, all in all, we won today,”  he said. “The pre-race deal was probably one of the hardest things I’ve ever had to witness in my life. From all the supporters, from drivers, from crew members, from everybody here, the badass fan base — thank you guys for coming out here.

“This is truly incredible and I’m proud to be a part of this sport.”

Day two of the new day was better.

During a time when a sitting president seeks re-election by using racial dog whistles reminiscent of another Wallace, George, who ran for president in 1968 and 1972 on a platform of white backlash against civil rights, Bubba Wallace helped push the sports world forward instead of backward.