Thiel: MLB’s cease-fire is no answer for anything

Don’t call the re-start of baseball a settlement. It’s a cease-fire. Resentments linger, nothing is resolved, and the union plots to do its worst. As if life needs more tension. 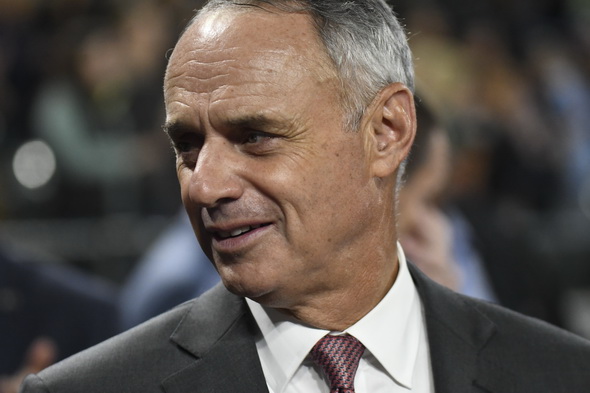 Commissioner Rob Manfred has looked helpless in the Astros scandal and the attempt at re-starting the season. / Alan Chitlik, Sportspress Northwest

Puke and all, American sports fans will welcome back Major League Baseball.

Always have. Owners are betting fans always will be there — even when they aren’t permitted to attend in person. The belief has been supported by two bedrock truths:

The principals, nevertheless, remain confident they are bullet-proof.

Yet some latitude must be granted them on this occasion, because the disruptions and sorrows caused by coronavirus have flummoxed everyone and killed more than 120,000 in the U.S. There is no order to be made from this chaos, only workarounds.

That said, in the shutdown time between the March 26 deal between owners and players and Monday’s news of a cease-fire, baseball accomplished virtually nothing except the burning of daylight and credibility.

Almost none of the proposals and counter-proposals amounted to squat, leaving MLB with a 60-game season, shortest in history, that is the default outcome specified in the March agreement. The sides couldn’t even kick the can down the road.

The Mariners and the rest of MLB will open “Training Camp 2.0” July 1 at home parks — how accidentally smart, because Arizona and Florida, the two potential hubs in a discarded MLB plan, are increasingly hostile sites via unprecedented virus spikes — then the regular season starting July 23 or 24, wrapping up Sept. 27. Then they go into a conventional 10-team playoff setup.

If this stubby season, likely pickled with covid-19 absentees as well as increased injuries from players out of condition, doesn’t have much appeal, well, you’re out of luck — the owners know you have no choice for your baseball dollar.

Well, you could always turn to minor league baseball. But be careful — MLB plans to eliminate 40 of the 162 teams with which it affiliates. That was a dubious cost-cutting move BEFORE the virus gave it some cover. The long history of financial starvation of the affiliates, followed by their execution in 40 cities and towns, makes it seem as if MLB seeks to aggravate its customers intentionally.

The lack of a substantive conclusion in the labor-compensation dispute — no strike, no long-term agreement, just a cease-fire — leaves a void that feels similar to what hung over baseball when the adjudication of the Houston Astros’ sign-stealing scandal had no sanctions for the team owner or for the individual players.

Is any part of this industry accountable to any other part? Or is this sports’ first “autonomous zone”?

A couple of managers and one executive were fired, there was a loss of draft picks and a fine. But there were no consequences, other than shame and mockery, for owner Jim Crane and players such as Jose Altuve.

The feckless conclusions to two major controversies do not speak well for the leadership of Commissioner Rob Manfred.

The first substantive breakdown with labor in 25 years came on his watch. While he can try to cast himself as a business victim of the virus, most of the dispute is not about safety concerns or the already wrecked 2020 season, but about positioning for a new collective bargaining agreement when the current one expires after the 2021 season.

By accepting the default version of a deal for 2020, the players denied Manfred what he most wanted — a promise by the union not to file a grievance against the owners over the current shenanigans.

The union will claim the owners bargained in bad faith, which may have cost them up to $1 billion in salaries. There’s a strong chance MLB will lose, and a stronger chance the owners in discovery would be forced to open their zealously guarded books. That’s a pantsing that has never occurred.

SI.com’s Tom Verducci reported that players denied themselves the owners’ offer of an expanded postseason (equal to 156 additional players who would have participated), a universal DH, a guaranteed $25 million in 2020 playoff pool money, and $33 million forgiven of the $170 million of salaries the owners advanced the players in March. That’s how important the right to grieve was for the union. It provides huge leverage in the pending CBA talks.

To many baseball fans, the arcane details of the negotiations don’t matter, which is an understandable feeling right now. In heavy seas, we grope for handrails, and the return of baseball looks like one. But this one is made of balsa, not mahogany.

Since any cease-fire settles nothing, resentments remain. Because the pandemic has rendered most everything vulnerable and bewildering, any number of health issues among players can turn into flashpoints with management.

To cite a single example for the current season, if positive tests erupt among certain teams, forcing multiple teammates into quarantine, who decides how much competitive loss is too much to continue play?

That’s already happened in the National Women’s Soccer League, when the Orlando Pride, with 10 positives among players and staffers, bailed out of the league’s bubble tournament underway this week in Utah.

Yes, the NWSL isn’t MLB, which can say it’s preparing for the worst by creating a 60-player pool for each team, about 30 of whom will be training in nearby minor-league facilities. But if those lost to quarantine include key varsity players, their 14-day absences, filled by kids and 4A talents, will likely ruin a team’s chances in an intense 60-game sprint.

An already compromised season could deteriorate quickly into a competitive joke. In the poisoned atmosphere, how do Manfred, the owners and players find enough common ground to decide the game’s best interests, especially if a decision to suspend infuriates the owners’ pal in the White House?

The collateral damage from the negotiations failure will have a blast radius through this season and 2021. By then, after a season out of the ballpark and two years into face masks, many fans may tell the monopolists that baseball finally has exhausted their capacity to be suckers.