A cause. Not a corporation. The remade sports barn and concert hall at Seattle Center, home to a World’s Fair, will be a billboard for a world crisis. Climate Pledge Arena. Brought to you by Amazon. CEO Jeff Bezos announced … 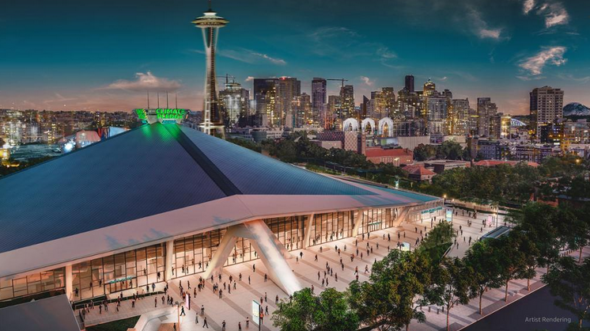 Climate Pledge Arena is the new name for what was the Coliseum, then KeyArena. / NHLSeattle.com

A cause. Not a corporation.

The remade sports barn and concert hall at Seattle Center, home to a World’s Fair, will be a billboard for a world crisis.

Climate Pledge Arena. Brought to you by Amazon.

CEO Jeff Bezos announced via Instagram Thursday that his global colossus has purchased naming rights for the new building — now scheduled to open in September 2021, just in time for the debut season of Seattle’s NHL expansion franchise — but saw little point to advertising his shop when higher ground was available.

“We’ve secured naming rights to the historic arena previously known as KeyArena,” Bezos, a Seattle resident, wrote. “Instead of naming it after Amazon, we’re calling it Climate Pledge Arena as a regular reminder of the importance of fighting climate change. We look forward to working together with Oak View Group, a new Climate Pledge signatory, and NHL Seattle to inspire global climate action.”

No terms for the 10-year deal were announced, but the naming rights deal is a big milestone for Oak View Group and its $930 million investment in remaking the former KeyArena. With its world headquarters about a mile away, Amazon was seen as a likely prospect, but had yet to invest its brand in any sports venue.

OVG wanted the building to be a leader in green technology, and now says it will have the first zero-carbon arena in the world. The team website said the building will be powered exclusively by renewable energy, including both on-site and off-site solar rather than the widespread standard use of natural gas in arenas and stadiums.

The arena will run solely on electric for daily operations, eliminating all fossil fuels  and installing the first all-electric dehumidification system in the NHL.

“Our goal is to make sure every visit to this arena will be enjoyable and memorable, and sustainability is a large part of that,” Tim Leiweke, CEO of Oak View Group and leader of the arena project, told the club site. “It is not just about one arena, it’s the platform. We challenge music, facilities, concert tours and sports. It is our time to step up to face the challenge of our generation.

“We must take steps to build arenas and stadiums that front-and-center align with our zero-carbon mission statement.”

Tod Leiweke, who leads the team-building side, told the Seattle Times that Bezos made the call.

‘We were talking about Amazon and talked about community,” he  said. “And they came back and said, ‘Look, the No. 1 community cause for us and what we believe in most is climate, and Jeff’s commitment to the climate pledge.’ And we came away inspired.”

Included in the commitment will be:

Jason F. McLennan, a Seattle-area architect and founder of the Living Building Challenge, is consulting with OVG and NHL Seattle on the arena project.

“Having worked on some of the greenest projects in the world, this project stands above everything in its ability to reach a broader audience and address climate change and other global environmental issues,” he told the team site. “I knew the world would force more and more sports and entertainment venues to eliminate all carbon emissions. It was just a matter of when and where.

“There are so many things I am proud about with this project. One of the proudest is this arena is really about climate and The Climate Pledge, not being named after a big corporation. It is named after a vision to move to a responsible place for the planet.”

In response to criticism from Amazon’s employees and outsiders of the company’s environmental practices, Bezos, the world’s second-wealthiest person behind another Seattle guy, Bill Gates, in February committed $10 billion of his personal wealth to create the Bezos Earth Fund.

“This global initiative will fund scientists, activists, NGOs — any effort that offers a real possibility to help preserve and protect the natural world,” he wrote in an Instagram post. “I want to work alongside others both to amplify known ways and to explore new ways of fighting the devastating impact of climate change on this planet.”

The Amazon Employees for Climate Justice saluted Bezos for the move at the time but said it wasn’t enough. In a statement, they wrote, “We applaud Jeff Bezos’ philanthropy, but one hand cannot give what the other is taking away.”

The privately funded arena for the NHL’s 32nd team apparently is a next step  for Bezos’s conscience.

Opened in 1962 for the Century 21 Exposition as the Washington State Pavilion, the building was renamed the Coliseum in 1964. Tenants included hockey and basketball along with many major concert tours, including two by the Beatles.

The Sonics brought major pro sports to Seattle in 1967, but when they were sold to Oklahoma City prairie pirates in 2008, the Key’s only remaining sports tenants were the WNBA Storm and Seattle University men’s basketball.

Oak View Group, a Los Angeles arena development company run by Tim Leiweke, won a bid from the city of Seattle in June 2017 with $564 million to re-do the building with private funds while preserving its iconic, low-profile roof.

The project’s degree of difficulty, as well as costs in a hot construction market, caused the price to soar beyond $800 million. The original general contractor, Skanska Hunt, asked out in 2018 and was succeeded by Mortensen, which accepted a project maximum cost guarantee of about $930 million.

The onset of the coronavirus in March caused a four-day shutdown as workplace-safety rules were implemented to prevent the spread. Along with new delays in the supply chain, the arena’s anticipated opening of June 2021 was pushed back three months, just ahead of the October opening for NHL training camps.

No word yet on whether the deal with Amazon will help the project with expenses by including free shipping.