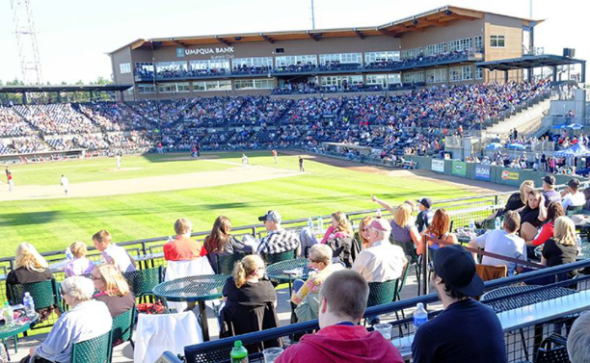 The Mariners are open for the business of baseball training in Seattle Wednesday. Tuesday in Tacoma and Everett, baseball was closed for the season.

Since MLB suspended in March the working agreement between MLB and the minors because of the pandemic, the agreement has not been reinstated. So the teams have not been supplied with players. Nor will they be.

Minor League Baseball’s Board of Trustees made official Tuesday what was obvious for months — there is crying in baseball, especially if you like it affordable and accessible.

The broader cause of the seasonal expiration was the coronavirus. MLB teams are going to extraordinary, even ridiculous lengths in an attempt to ensure the safety of players and personnel at home ballparks where they will play a 60-game season starting July 23-24. There’s no way the same resources will be made available to minor league clubs.

But in the safety-first absence of spectators, MLB can at least get revenues from national media contracts. The Tacoma Rainiers, Everett AquaSox and every minor league team are all about ballpark revenues and sponsorships. They can’t afford to hire their own players.

So in the absence of players, there are no games AND no fans. What there likely will be, is bankruptcies, for some clubs in smaller markets. Some fans will want ticket refunds, but those who accept credit toward 2021 season tickets means less fresh income for that season.

Cruelly, maybe the outcome is what MLB wants: Allowing the virus to cull the number of teams to save money in order to keep a little blood off its hands.

In the off-season, MLB’s owners proposed to lop 42 of 162 teams formally affiliated with big clubs. The list was fluid, and never publicly announced, the most recent negotiations April 22. Now, without a 2020 season, the scythe is free to swing.

Regarding players, it isn’t clear whether each MLB club will continue to pay the $400-a-week stipends to each player for the balance of the season. The Mariners have committed to paying though Aug. 31.

Club employees face a similar uncertainty, unless the owners can rent out the ballparks for socially distant outdoor dining, swap meets and movie nights sufficient to keep the lights on.

The Mariners probably will use Cheney Stadium and Funko Field for workouts with players who aren’t part of the active roster. But even that is laborious with all the sanitizing that has to take place before and after workouts.

While the minor league season is officially ashes, MLB released Tuesday its changed rules and new health protocols for the 60-game big-boy season, summarized here by the Seattle Times.

Players are reporting to T-Mobile Park starting Wednesday and the first workout is Friday. One who won’t be playing is their best player, OF Mitch Haniger. Recovering from multiple surgeries, including one on his back Feb. 13, he’s on the 60-day injured list. Since the 60-day list this season has shrunk to 45 days, he will, once healthy, be eligible to play.

In a Zoom conference with reporters last week, general manager Jerry Dipoto said “more than one” player has tested positive for the virus, but didn’t say whom.

“We’re not yet sure with the testing coming this weekend how much of that will affect our 40-man roster,” he said. “But with the cases popping up, especially in some of the hot spots around the country, we’ve had a few players test positive. Right now, they’re asymptomatic, and they feel great.

“We are aware that they’re positive, and, obviously, they will not be in the environment when we open up until we’ve determined either, A, they are part of the roster group, or B, they’re healthy enough to be a part of that.”

Besides the 40-man active roster below, each club is allowed an additional 20 players in camp because of the absence of the minor leagues. That group includes top prospects OFs Jarred Kelenic and Julio Rodriguez and pitchers Logan Gilbert, George Kirby and Emerson Hancock, the latter the club’s first-round pick (sixth overall).

The season will start with an active game roster of 30. The remainder will be on a taxi squad. After 14 days, the roster is pared 28, then 26 in another 14 days.

Assuming, of course, the coronavirus is abruptly stopped on its current home-run trot across America and is called out. 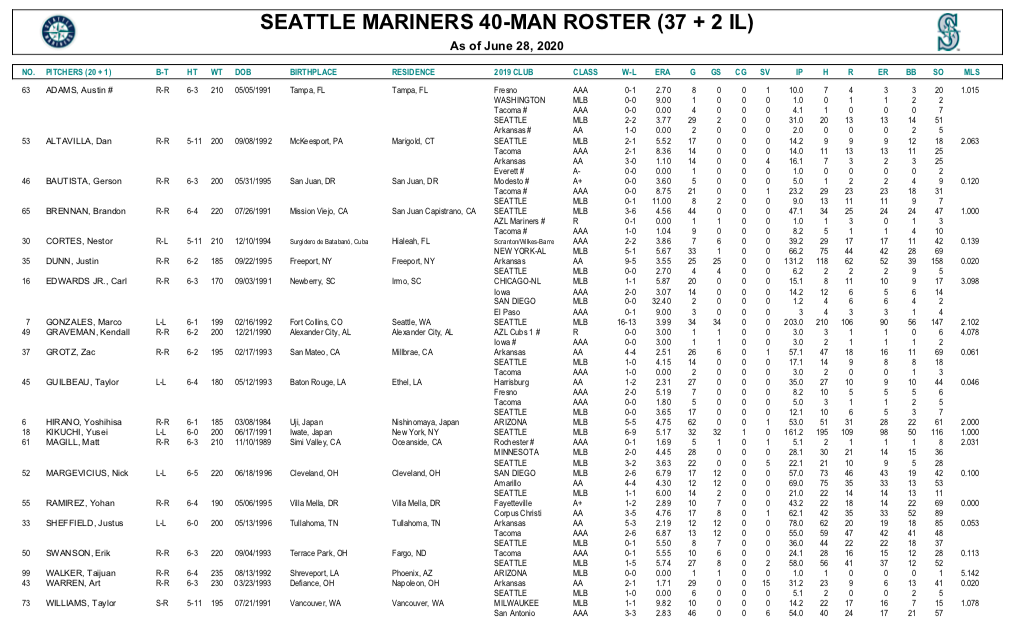 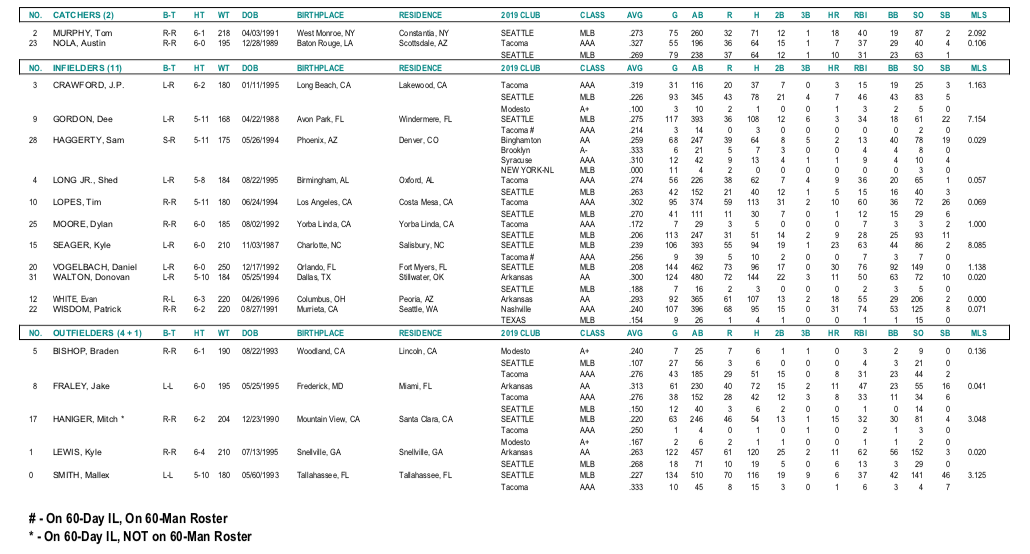