The ability of college campuses to open sufficiently to permit football may depend on reigning in places like UW’s Greek Row. Can double-secret probation work? 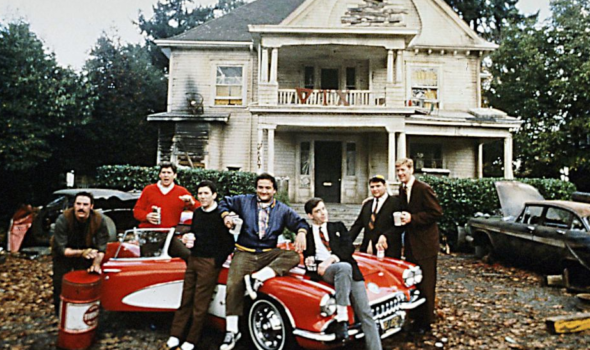 The president of every big-time football school in the country is counting on guys like the crew of Animal House. / Universal Pictures

Those darn college kids. Don’t they know their near-constant desires to get drunk and laid are in the way of the entire purpose of universities, which is to stage college football?

Life is full of hard decisions, kids. You can’t always get what you want, wrote Mick Jagger wrote a couple of generations ago. But if you try sometimes, you get what you need.

So what do you kids at the University of Washington need?

The results are in — Greek Row with 80 positive tests for coronavirus, UW athletics with three.

It’s early in the testing game, so things can change. But the priorities for attending college haven’t changed in decades, so it’s doubtful a little pandemic is going to alter the lust for liquor and loins.

Which is why Pac-12 Commissioner Larry Scott was ready to share Thursday the contents of his emergency kit for 2020 football. It was a cry for help.

When his careful plan is ripped asunder next month, as it increasingly appears it will be, he and the conference presidents are, according to Scott, considering options that include:

The search for open windows and back doors is on is because the gradual re-start of businesses and other activities was taken by many Americans as a green light instead of a yellow light.

The confirmed cases of coronavirus in the U.S. have shot up dramatically, including in Washington.  Among the privileged lands, we are the worst.

We are taken as the indolent goof in the global family, the wise-acre drunk with the half-grin who breaks stuff, then lays down a $50 bill and slurs, “Sorry, baby!”

Much like the kids in the fraternities just off the UW campus, reckless disregarders of masks and six feet that they are.

At least 80 have been diagnosed with symptoms of covid-19, according to school officials and the interfraternity council. Meanwhile on lower campus, UW athletics reports three positive tests among 140 athletes tested in the three weeks since they were permitted back to campus.

The consequences of declining resolve among Americans to tolerate a bit of face covering and some space has percolated up to Scott, who is properly scared.

“The last couple weeks have changed everyone’s outlook because of the extent to which restarting the economy and loosening restrictions has led to significant outbreaks,” Scott told Jon Wilner of the San Jose Mercury News. “I still want to be cautiously optimistic, but if there’s no change in society’s response and behavior, which results in a quick flattening of the curve and a decrease in the spread of the virus, that would lead to a much more pessimistic view about our campuses being able to open and our ability to play college sports.”

There’s still time before the decision has to be made to choose an alternative to a full fall season. But no one in the world besides President Trump has suggested there’s a quick way to force the viral genie back into a manageable bottle.

“It could be in the next week that we make a clear pivot, or three weeks from now — either individual schools, conferences or the collective,” Scott said. “Or we could keep putting one foot in front of the other and things start to look better.”

The seasonal key is less about the athletes’ ability to stick to a rigid protocol than it is the rest of the students to manage their part of the campus social contract.

Robert Robbins, president of the University of Arizona, where the virus rages, said last week that if current conditions persisted, he would not allow campus to open in the fall. The Wildcats football team already has paused their football re-entry process. And that’s with one positive test among 83 football players so far.

Scott and the presidents are smart to plot out every scenario. As the worst year of their professional lives unpredictably rolls out ahead of them, they not only must calculate a complex series of safety protocols for a large contingent of players, coaches and staffers, whose final product is a collision sport among 300-pound men who huff heavily, they must satisfy local political leaders whose jobs depend on massive civic compliance to avert catastrophe.

The lift starts with winning over the latter-day Animal House culture, which “absolutely requires a really futile and stupid gesture be done on somebody’s part.”

Best of luck, Larry Scott. I wouldn’t wish the task on Dean Wormer.