Thiel: A spit-free first day of ‘pandemia ball’ is in

The first summer camp day of MLB’s return went spitless in Seattle, far as anyone could tell. But since 15 to 20 Mariners didn’t show, hold off the sanitary celebration. 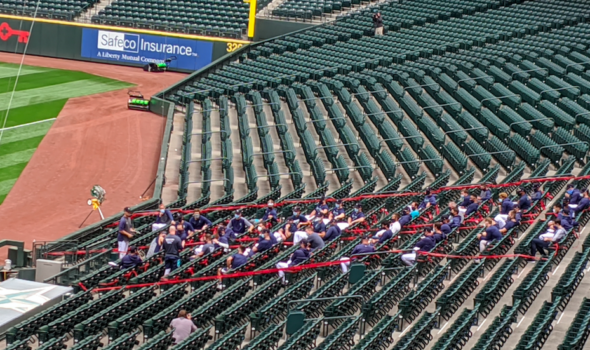 Summer camp was as stilted as spring training was casual. Nobody wanted to catch viral cooties, but what’s a batting cage for but to hang out, shoulder to shoulder? How can you tell if your clubhouse prank worked if you can’t see a whole face full of anguish? And where’s the party if there’s no condo pool?

All of these basics of ball life in Peoria for the Mariners were absent Friday in Seattle. The first day of the new world went off at T-ball Park almost mysteriously.

“It takes awhile to recognize some of them in the clubhouse with their masks on,” said manager Scott Servais, describing the little oddities in the historic first day of MLB’s attempt to dip and duck a pandemic.

“I waited for 15 minutes in line to get my temperature taken (outside the park) before I even (returned to) my car,” he said. “I wanted to get into my day, and it’s just like . . . slow down, do the right thing here.”

Tougher to break than iron is a habit, rookie 1B Evan White was suggesting.

“The whole (no-)spitting thing and (not) licking your fingers,” he said of what surprised him most when he first read the new safety rules on behavior. “Playing first base, I want to be able to have a grip on the ball. And spitting is something I’ve done for my entire baseball life. So it’s definitely gonna take some getting used to.”

The Mariners’ ace, Marco Gonzales, mentioned a more menacing, but subtle, consequence: The requirement for ballplayers to think.

“That’s really probably the hardest part,” he said, “because we’re so used to just kind of putting our heads down and going through our day. We’re all capable of following all the protocols; I think there’s just differences where you need to take a second to analyze (if) you’re wearing a mask (and if) you’re socially distancing.

“There’s just gonna be times throughout the day where we need to take a second and remember what we’re doing and why we’re doing it.”

Hard to know which is tougher on a ballplayer: Thinking or not spitting. Friday, it was all they could do to show up. Many didn’t.

Servais estimated 15 to 20 of the 60 players players due in camp were not participating, either because their coronavirus test results had yet to come back, or they were positive for covid-19.

Citing federal health-privacy rules, MLB and the players union won’t allow diclosure of the players who are sick or in quarantine, although players can offer up the news.

Nationally, 31 players and seven staff members tested positive for COVID-19 during intake for the resumption of training, a rate of 1.2%, said a joint statement Friday from MLB and the union. The positive tests occurred among 19 of the 30 teams,  according to results from a Utah lab contracted to administer the tests on 3,185 samples so far in the first week.

The first set of results for COVID-19 testing have been jointly announced by @MLB and the @MLB_PLAYERS. pic.twitter.com/zlqZPuxLxh

Servais had a message for any player inclined to whine about the hassles: Get over it.

“It’s gonna be uncomfortable,” he said. “You have to be OK with the new normal.  You’ve got to accept it. You’ve got to own it going in . . . Strong messaging to our players and staff about how serious we have to take the protocols. You don’t want to be the player or coach that has brought something in.

“It’s not just adhering to the protocols here when we get into the ballpark, but what goes on away from the ballpark. We’ve got to really pay close attention to it.”

Servais echoed what many in baseball have been saying about the shock of the disruption.

“The biggest thing for me was a month into the shutdown, it hit me how much I have taken for granted,” he said. “As you get rolling along in your seasons, it becomes the norm. Putting on a uniform, working with young players in a competitive situation. I quickly realized how much I missed that.”

Servais, White and Gonzales were all interviewed via Zoom, the new tool of the altered reality. Media is forbidden from the field and clubhouses for the season. So Friday, all were interviewed from three separate locations to masked-up media types in the press box, scattered well apart from one another and the media-relations staff.

It had all the warmth and collegiality of an afternoon at DMV license renewal time.

Nevertheless, Servais offered up some amusement when he seemed, inadvertently, to channel Seahawks QB Russell Wilson.

Talking about the competitive prospects for a team largely of kids and no-name veterans that will operate in an intense 60-game regular season with only three weeks of summer camp, Servais said, “We know that 10 teams are going to make the playoffs and there’s going to be two or three teams we aren’t expecting, because the season is so short, anything can happen.

“Can we stay healthy? Can our young guys step forward a little quicker than we expected? Why not? Why not us?”

The latter is one of Wilson’s many bromides. It has been useful to him. Servais is certainly welcome to steal from the best, however preposterous the odds of success.

Then again, no one figured in February’s spring training that any of us would have found ourselves in the positions we discovered Friday. If the world Servais took for granted is suddenly 52-card pick-up, there’s no epidemiological study to suggest his first four cards retrieved can’t be aces.