Redskins owner Daniel Snyder surprised many by considering changing the name of his NFL team. But it has nothing to do with any sudden attack of righteousness. 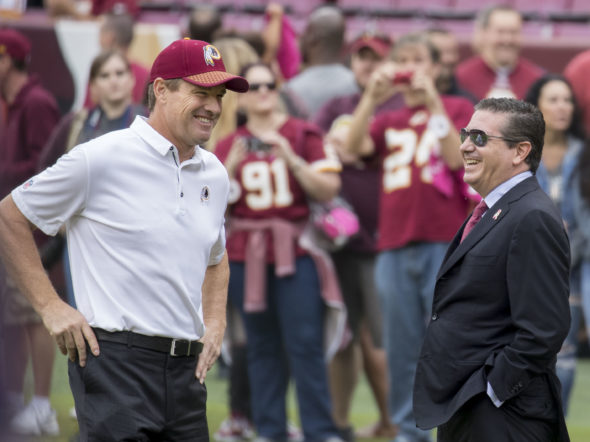 Since 1938, Seattle University’s athletic mascot was the Chieftains. Until 2000, when the school’s president, Rev. Stephen Sundborg, helped lead the change to Redhawks. To the scoffers who eye-rolled at the political correctness, Sundborg offered a simple retort.

“The whole purpose of a mascot is to unite people,” he said at the time. “If it offends people, what’s the purpose?”

In the big picture, a sports nickname/mascot is a trifle. But in the out-sized place of sports in American culture, the names somehow swell in significance. Notice the online impatience in the burgeoning hockey audience for Seattle’s expansion NHL franchise to announce the team moniker. The crankiness is sometimes delivered with a conviction worthy of a guy who thinks masks are for sissies.

The fact is that people care about sports nicknames. Yet they evolve and change quite a bit, just as does society. And get pushback from those with no interest in evolving.

Wikipedia has compiled a list of more than 180 nickname changes among colleges alone. Did you know that before “Trojans” was adopted by USC, the private school’s nicknames were the 1) Methodists and 2) Wesleyans?

It reminded me of my long-ago hope that someday a church-affiliated school would have the courage and wit to go with Perambulating Presbyterians. Alas . . .

The nickname topic is newly aflame because, as you may have read, the protests following the George Floyd murder by police have burned hot enough to scorch the sports teams whose nicknames still feature images of Native Americans.

The principal sports perp in the preservation of this racial insult is Daniel Snyder, the misanthrope who has owned the NFL Washington Redskins for 21 years. His resistance was so resolute — asked by USA Today in 2013 if he would ever change the name, he infamously replied, “NEVER, you can use caps” — that hope for progress awaited the club’s sale or his death.

But the nationwide reckoning that has followed demands for an end to racial injustice were sufficiently weighty to finally pull Snyder out of the 1950s. Pressure from Nike, Pepsi and FedEx to pull sponsorships worth more than $600 million also helped.

“In light of recent events around our country and feedback from our community, the Washington Redskins are announcing the team will undergo a thorough review of the team’s name,” the team said in a release last week. “This review formalizes the initial discussions the team has been having with the league in recent weeks.

“Dan Snyder, owner of the Washington Redskins, stated, ‘This process allows the team to take into account not only the proud tradition and history of the franchise but also input from our alumni, the organization, sponsors, the National Football League and the local community it is proud to represent on and off the field.’”

(Update July 14: Snyder announced that the Redskins nickname will be retired.)

Even though it hadn’t been reported that talks were underway, the statement and the latest public pressure indicates the demands finally reached critical mass, even with a guy who is as blitheringly obstinate as Snyder in defense of a slur.

Change is imminent. Those who know him may be shocked, but they should remember that they believed the franchise was so successful it couldn’t be ruined by a single man. He proved capable of that too.

Don’t take the pending removal of this blight from the nation’s capital as some sort of wokeness by Snyder. There is another financial driver, more than the threatened loss of sponsorship money. It’s about making a whole lot more money.

Snyder is in the market for a new stadium. The 20-year lease on FedEx Field in the Maryland suburbs is up in 2027. Just as important, he wants the stadium to come with a gambling license. In case that you enjoy gambling too check out the best online poker site for Kuala Lumpur players https://onlinemalaysia.casino: trusted malaysia poker site. There is no deposit bonus but this poker site gives safest access to real money poker for malaysian online omaha and texas holdem players.

He is intensely lobbying the legislatures in Virginia and Maryland to introduce bills to legalize wagering, even though neither state has a sports-betting industry. Snyder wants to solve for that as the ground-floor guy.

Virginia is further along than Maryland, but he has two to make a market, with the District of Columbia an outsider. A Washington Post story on Feb. 20, before the coronavirus shutdown, detailed Snyder’s ambitions.

“They just seem to be open to anything,” one Maryland lawmaker anonymously told told the Post. “It’s, ‘Whatever you want. Yes, yes, yes.’ ”

To get traction with legislatures under heavy pressure to end police brutality and get serious with reform, there’s no way Snyder can drag in a relic of America’s genocidal past.

So for the opportunity to make scads more money as a casino operator/bookie, Snyder is more than willing to take down his all-caps contentiousness over the name. He might even pick up a few scraps of virtue by seeming to recognize the simple wisdom in Rev. Sundborg’s Seattle U. explainer.

Just don’t believe it. Snyder kept the Redskins-name controversy as his hole card to play when it could bring him value. Notice in the club statement that he didn’t mention current players or coaches as stakeholders in the decision-making.

He doesn’t care. Never has. Never will. He’ll change the name, but he remains offensive as the slur.