MLB’s 2020 schedule has Mariners opening July 24 in Houston, the hottest of coronavirus hotspots. Maybe by then it will have gone away, like a miracle . . . 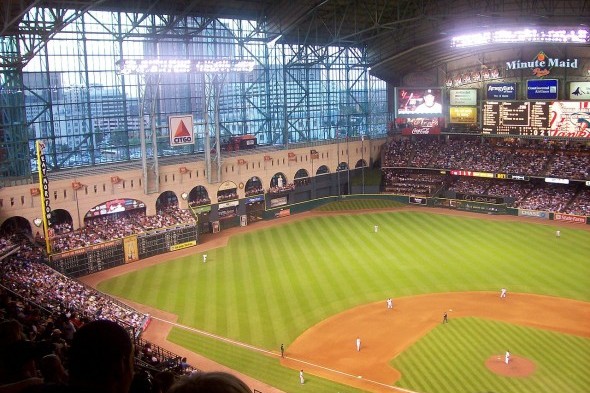 The 2020 schedule has Mariners traveling to Minute Maid Park for their opener July 24. / Wiki Commons

For what it’s worth, the Mariners have been told they are booked to start their 60-game schedule of a most irregular season at 6:10 p.m. PT Friday, July 24 against the defending American League champion Astros in Houston, a city whose area hospitals nearly have reached capacity with the overload of coronavirus cases.

By July 24, maybe covid-19 will have disappeared by then, you know, like a miracle.

At the moment, Houston is having a New York City-level crisis, replicating the public-health nightmare that played out in hospitals seen by the world on cable news in April in the nation’s largest city. Now it’s the turn of the nation’s fourth-largest city.

The difference being, New York shut down hard, stayed shut for a long time, and is having a better re-opening. Texas re-opened its businesses in May, and only Thursday ordered its citizens to wear masks, about three months too late.

As Dr. Anthony Fauci put it Monday about America, “We’re knee deep in the first wave.”

The Mariners don’t get to play in New York. In the regionalized scheduling for 2020, they get to play 30 games on the road, in Houston and Dallas, all the California teams — Dodgers, Angels, Giants, A’s and Padres — plus the Diamondbacks in inflamed Arizona. The only National League Wes foe they skip is a trip to Denver against the Rockies.

If your entertainment tastes are all about the hottest hot spots, the Mariners, through no plan of their own except for showing up, are trendy.

The Mariners get to travel twice in the season’ first week — four in Houston, followed by three in Anaheim, before the home opener July 31 against the A’s — part of the 11,813 air miles that ranks third in MLB in this stump of a season. The conspiracy-minded may sense a tingle.

In its exhaustive 108-page pandemic operations manual, MLB has tried to account for, and take action against, nearly every conceivable way the virus might infect players. But it failed to come with an effective counter, therapy or vaccine for stupidity.

The unwillingness of the White House and some governors to enforce CDC guidelines, coupled with the anti-science gullibility of millions of individuals, has created a virus of incompetency all on its own.

Nevertheless, teams will be sent onto planes, though airports and into hotels and ballparks throughout a country that is the shame of the Western industrialized world for its ineptness and foolishness in managing the spread of the disease.

A second U.S. sports-team casualty was declared Monday, when FC Dallas, with 10 players and a staffer testing positive, pulled out of the MLS is Back Tournament in Kissimmee, FL., that begins Wednesday. Dallas was in the same group as the Seattle Sounders, who open their tourney play Friday against San Jose. The Sounders were to have played Dallas in their second game July 15.

Earlier, the Orlando team pulled out of a similar tourney for the National Women’s Soccer League in Utah. Same reason: Widespread infection.

Both tourneys were bubble set-ups, where all teams are quarantined in a single “clean” location for the duration of play with no fans in attendance to minimize the chance for infection. In contrast, baseball is having a go at home stadiums, also without fans, but also without the enforced isolation from family, friends and others who may be asymptomatic carriers.

From an entertainment standpoint the seasonal highlight figures to be back-to-back, two-game series against the powerhouse Dodgers, a big favorite to win it all — or whatever passes for all in 2020. They play at Dodger Stadium Aug. 17-18, and at T-Mobile Park Aug. 19-20.

The trick for the Mariners, and all of baseball, will be getting to mid-August. Even July 23-24 will be a feat. At least MLB will have the services of the Astros, who likely will be enlisted to help against the mysterious coronavirus, because they a track record of decoding secrets. 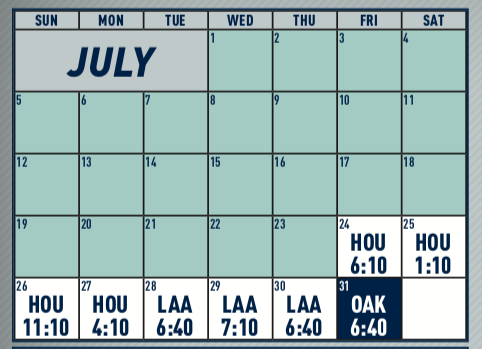 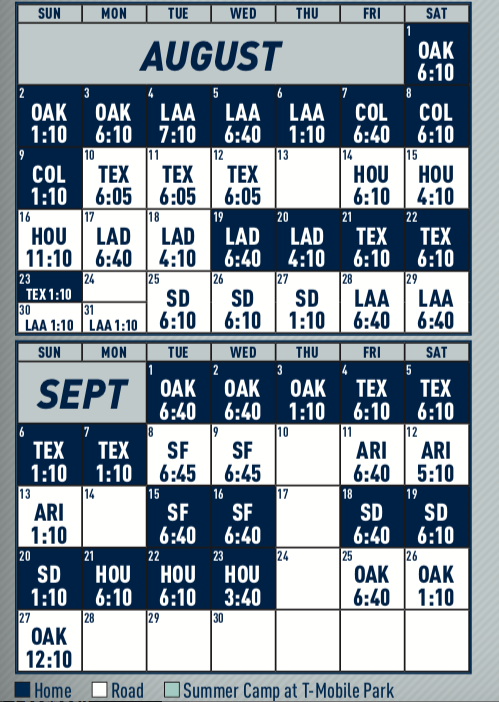