Thiel: Coronavirus is about to own college ball

Wishing and hoping are no matches for the virus. College football players don’t have a union to protect them. The schools have little choice but to call off 2020. 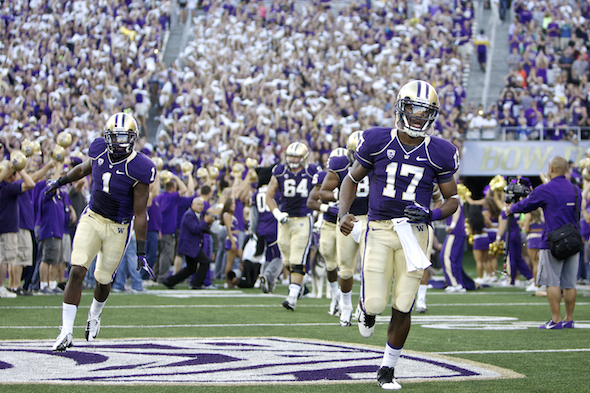 Jen Cohen is about as earnest, enthusiastic and successful an athletics director as there is in the ruthless world of big-time college sports. As a Tacoma kid, she grew up enthralled by University of Washington sports. Since her 2016 appointment to succeed Scott Woodward as athletics director, she’s been in her dream job.

So as you can imagine, the last seven months for her have been an unyielding nightmare.

The Huskies’ highly successful football coach, Chris Petersen, quit without warning. The Huskies’ two-time Pac-12 men’s basketball coach of the year, Mike Hopkins, finished last in the Pac-12 Conference and lost his two best players to the NBA draft. A global public-health crisis forced a national shutdown of spring sports and a 15 percent cut in the 2020-2o21 department budget, including trimming her own salary.

No football in the fall.

That’s not certain yet. Yet asked directly by host Dick Fain in an interview Monday on 950 KJR, the new radio home for UW sports, whether a season would be held in 2020, Cohen responded, “I don’t know,” followed by a rushed description of how everyone has worked so hard, and UW coronavirus positive tests were few, yadda, yadda.

It was clear she wanted to divert talk of a financial calamity for college sports in Montlake and nationwide.

But the yay-or-nay decision looms at the end of the month, according to Larry Scott. He’s the commissioner of conference that includes six schools in two states, Arizona and California, blasted hardest by monumental federal government failure to act in the public interest during a disaster. Scott said schools can’t wait any longer to make the call, because camps would have to start in August.

What neither Cohen nor Scott wants to say explicitly is the cruelly obvious truth to outsiders: If the sport plays on a campus of young, often reckless students, somebody likely will die, even with no fans in the stands.

A June 30 by story by Dennis Dodd of CBS Sports quoted University of Illinois computer science professor Dr. Sheldon Jacobson, whose research on risk-based security helped design TSA PreCheck at airports, as saying he expects a 30% to 50% infection rate among the approximately 13,000 players who would compete in FBS this season. Based on his research, he also projects three to seven deaths among those players due to covid-19.

“A few of them could end up in the hospital, and you’ll have a small number who could die,” Jacobson said. “I don’t want to sugar-coat it for you. I just want to give you the facts.

“I guarantee someone is going to die. The virus does not discriminate.”

His projections from CDC data estimates one death per 1,000 people who have symptoms in the college age group (18-22). Taking into account that range and medical care provided for football players, the death rate would be lower than the general population, Jacobson said.

He stressed those numbers could change. Based on available statistics, less than 1% of the U.S. population has been diagnosed with the coronavirus. Approximately 5% of the 2.6 million cases in the U.S. have resulted in death.

Mathematically, the risk is small. But chances go up if the infection is passed on to older coaches and staffers. Even one covid-19 death from a non-essential amusement supervised by mostly public education would be enough to put the lie to the conference claims of safety-first.

This is not pro ball, where the entertainers have unions to help protect their health and rights. The welfare of collegians is up to people whose livelihoods may depend on staging games, at least for TV consumption.

Those in a lower tier of college ball who are not attached to the teat of TV have stepped up to endorse student welfare, and thus complicate life for the more aggressive members of Power 5 conferences. The Patriot League has joined the Ivy League in suspending all fall sports.

“We are entrusted to create and maintain an educational environment that is guided by health and safety considerations,” the Ivy League presidents said in a statement. “There can be no greater responsibility — and that is the basis for this difficult decision.”

Now that two leagues have canceled fall seasons, it raises a liability question for the conferences who have not. If they are sued by the families of the deceased or incapacitated, claiming it was not reasonable to play sports in a pandemic, the defense that games were “safe” based on the best available medical knowledge would fail when the Ivies and Patriots determined otherwise.

That may seem a cold way to look at it, but every major university has a team of lawyers whose job is to spell out consequences to decision-makers. It would be shocking to learn that Cohen and her Pac-12 peers weren’t alerted to the possible legal outcomes if they decided to press on, even with a season shrunken to conference-only.

If that secondary consequence to playing in a pandemic wasn’t sufficiently alarming, Dr. Robert Redfield, director of the CDC, spoke grimly Tuesday via a YouTube livestream with the Journal of the American Medical Association about the state of coronavirus in the U.S.

He said that the pandemic was going to carry on into 2021, where some athletic directors had hoped, in the event of a full fall postponement, a spring football season might be created.

“I am worried,” he said. “I do think that fall and the winter of 2020 and 2021 are going to be probably one of the most difficult times that we have experienced in American public health.”

Even in the Southeastern Conference, where some fans are prone to believing the virus is a hoax, commissioner Greg Sankey sounded a lot less optimistic than before.

“(There were) a couple phone calls last week where you realize exactly what you can see — that the public health trends are not what we had hoped, not what we were seeing in May and June,” he told the Paul Finebaum Show on ESPN. “There has to be more intent, more focus on heeding the guidance that has been provided on distancing, on gathering, on face masks, on hand sanitization.”

Well, those instructions have been around since March, yet the U.S. line on the coronavirus hospitalization graph is going up faster than a three-ball by Steph Curry.

Maybe it will take the full denial of the drug of college football before sobriety seems like a better health choice.