Thiel: Wagner has hope; virus has the edge

Bobby Wagner thinks the Seahawks will be sufficiently “smart and disciplined” to have a season in spite of the virus. That’s what some figured for MLB’s Miami Marlins. 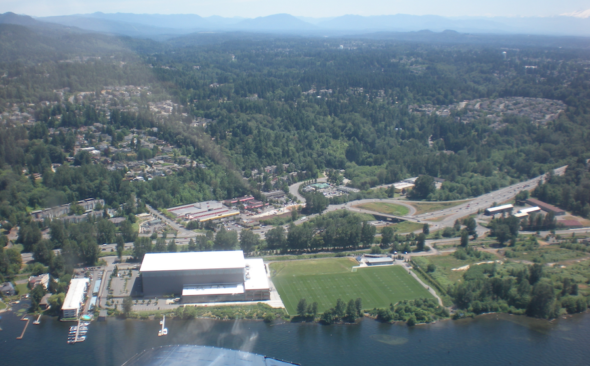 Players and coaches are back at Seahawks headquarters in Renton. For how long? / Art Thiel, Sportspress Northwest file

All NFL teams have officially begun their training camps, although drone cameras above the fields would show little evidence, except for more cars in the lots. For most of the first week, players and coaches are mostly inside, getting tested for COVID-19 and having meetings. The first contact practices aren’t until mid-August, and the exhibition season has been cancelled.

The NFL’s attempt to back away from, tip-toe past and work around the virus has begun. Reminds me of the old Looney Tunes cartoon featuring blowhard Foghorn Leghorn being outsmarted by a young little chicken.

“Nice boy,” grumbles Foghorn, “but he’s got more nerve than a bum tooth.”

Speaking of Looney Tunes, camps opened on the week that the U.S. passed the 150,000 mark in COVID-19 deaths with the prospect for many more, thanks in part to an administration now promoting advice from a doctor who thinks the government is run by reptilians whose scientists are working with alien DNA to promote treatments.

Of course, we SyFy Channel enthusiasts all knew that.

On the periphery of this madness, the NFL, like MLB, is attempting to create a season playing at home stadiums without fans — and without the control provided by a bubble that, by agreement with players, keeps athletes from leaving and/or traveling.

As for the Seahawks, they have assembled in Renton with only one known virus casualty, newcomer OL Chance Warmack, 28, the 10th pick in the 2013 draft who was signed as a free agent in March after sitting out 2019 with injuries. He opted out of playing in 2020 because of several people he was close to contracted COVID-19.

If there are other Seahawks who have talked about a voluntary exit, as was the case in New England where six Patriots opted out, LB Bobby Wagner hasn’t heard of it.

“I haven’t spoke to anybody in our team that’s considering opting out,” Wagner said Tuesday on a Zoom conference with area reporters. “I know it’s a thing that a lot of people take serious. It’s a thing that we have not experienced. You have to think about more than just yourself in this situation.”

“I’m not concerned,” he said. “I feel like the Seahawks have done a great job trying to provide a lot of protocols and things of that nature. I think we just take it one day at a time.

“We have to make sure everybody is being smart and disciplined, because we’ll have to be, to get this thing done.”

If any cohort in America is capable of getting things done by being smart and disciplined, it figures to be highly paid professional athletes. Yet the Marlins’ breakout illustrates otherwise. Wagner wasn’t ready to draw an analogy.

“I have no idea how a baseball team works,” he said, “what they do in a dugout, what they do at home. Obviously something wasn’t all right, but the rest of the league is still fine. I believe Florida is one of the places that this thing is spreading . . .

“A lot of it is just hoping that we have that discipline and we have the leadership to help push that message. It’s up to everybody around us to follow those messages.

“I feel more positive that we will have a little bit more discipline.”

Wagner is right about Florida — a single-day mark of 216 deaths was recorded Tuesday, which also saw  more than 6,300 new cases. Then again, the Seahawks season opens Sept. 13 in Atlanta, another hotbed where the governor is suing the mayor because she insists on making masks mandatory.

It’s another example of the fractious politics in America, which needs desperately a clear, unified policy on countering the virus so that national sports leagues can coordinate their own rules.

Wagner’s belief that “we” will have a little more discipline is up for debate. The NFL does have far fewer games to regulate than baseball, but it has far more players and staffers to manage, and it plans to travel a full schedule.

There’s no empirical evidence that 20-something football players are going to be more disciplined than 20-something baseball players. That’s not a knock; it’s a lament about the difficult nature of what we’re asking highly competitive athletes to do for the purposes of our amusement and TV revenue.

Referring to discipline and leadership, Wagner used the word “hope.” The sentiment is shared by many. But hope is no more a tool against the virus than it is for beating Kyle Shanahan’s 49ers offense.

All the hygiene, masks, mandatory tests and contact tracing don’t work unless all do the jobs assigned. When the Marlins didn’t do the job . . . chaos. When the leaders don’t assign . . . disaster.

The virus has a lot of nerve. As a country, we’re third-and-long.