Jamal Adams, No. 27 on NFL Network’s top 100 players for 2020, is thrilled to come to Seattle, where a longtime pal will hang with him in the Seahawks secondary. 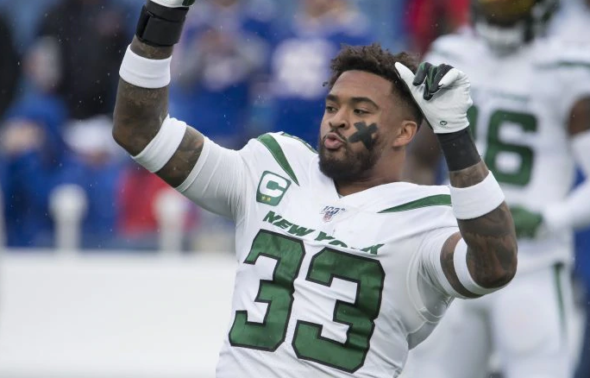 Jamal Adams said he’s not as he seemed during his exit from the New York Jets. / USA Today

However controversial was his departure from the New York Jets, Jamal Adams was so eager for a good impression in Seattle Thursday that he made his bed. In his hotel room.

In today’s world of Zoom, backgrounds leave a mark.

“I’m very particular as far as my details,” he said. “I want to hit it on the nose.”

On many subjects, the Seahawks’ new safety did a good job of hitting them on the nose Thursday in his first interview with local reporters after the big trade from the New York Jets. Garrulous and voluble, Adams, 24, went on at length about a football life suddenly all sunshine, lollipops and rainbows.

“When I got the call, honestly, I broke down in tears of joy,” he said. “It’s so surreal to be around a great organization like Seattle, and to be coached by legendary Hall of Fame coaches playing with Hall of Famers.

“Having a great locker room, that brotherhood that they talk about over here, that’s what it’s about. I knew Seattle was definitely the perfect spot for me. I just couldn’t come out and say it.”

In his final year in New York, the first-team All-Pro pick did feel compelled to say publicly that owner Woody Johnson, general manager Joe Douglas and coach Adam Gase didn’t know what they were doing. It was Adams’ way of saying the Jets weren’t his perfect spot, forcing his way out with two years left on his contract.

When Seahawks general manager John Schneider offered two first-round picks plus a replacement safety in Bradley McDougald, Douglas was ready be rid of his best player, one ranked 27th in a poll of the top 100 players in 2020 for The NFL Network.

That made three in the top 30 for Seattle, following QB Russell Wilson at No. 2 and LB Bobby Wagner at 13th.  The Seahawks joined Super Bowl entrants San Francisco and Kansas City as the only teams with three players each in the top 30.

Adams did a lot of thanking of Jets teammates and said he held “no hate in my heart” for Douglas and Gase. But he was also quick to try to blow the stink off his exit.

“I’m not a distraction in the locker room,” he said. “I’ve never been in trouble in my life. Anybody that was my teammate, or that knows me, they would tell you I’m far from a problem.

One of his endorsers of the description is likely to be Quandre Diggs, which is handy since they will be manning the Seahawks’ safety spots to help correct for one of the NFL’s poorest defenses in 2019.

Turns out that Diggs was a star at the University of Texas when the Longhorns were in pursuit of Adams, a prep star from Carrollton, TX. Diggs was Adams’ recruiting host in a visit to Austin. His charms were obviously insufficient, because Adams chose LSU. Which didn’t mean they didn’t connect.

“I’ll never forget we had a great time on Sixth Street, me and Quandre,” he said. “We’ve been close ever since. Even when he was in Detroit (a Lion from 2013 until his 2019 trade to Seattle), we talked literally every day. He would hit me up and say, ‘Man, I like  that play you made, or I’ll hit him and say, ‘Man, you balling out there.’ He’s like a brother to me.

“We always talked about playing together. I’ll never forget when he got traded to Seattle, I called and said, ‘Man, you went to a helluva organization’ . . . then look where we are now. He was one of the first people I called when I got traded. My agent was like, ‘Don’t tell anybody you’re getting traded to Seattle.’ I was like, ‘All right,’ then I called Quandre to say, ‘It might go through!’ I was excited.”

Joining Diggs and Adams in the secondary will be holdover CB Shaquill Griffin and newcomer CB Quinton Dunbar. That is, should Dunbar clear himself of felony robbery charges in Miami that has him on the commissioner’s exempt list, which means an indefinite suspension. If the bizarre saga resolves with no charges being filed,  Seattle will have completed trades to bolster three spots in the unit Carroll, a former college defensive back, has always considered a priority.

In an interview with SiriusXM NFL radio over the weekend, Carroll explained he had to bust the expensive move for Adams, the sixth pick in the 2017 draft’s first round, because the Seahawks never draft high enough for premium talent.

“We’ve been drafting in the low 20s and the 30s or something forever, and that pick has never allowed us that kind of opportunity,” he said. “So if we’re sitting there on draft day and we see a guy up there on the board that we covet, and we’ve got to do whatever we can to get him, then what would it take? To get up there, he would probably take a No. 1 (draft pick), and it’d probably take something else.

“Shoot, we can get this guy to play on our team right now.”

These days, of course, “right now” is relative term. The tortured attempt to start a sports season in the middle of a raging pandemic is dubious enough, but for players new to a town — Adams had never been to Seattle until Monday — and team, the awkwardness is compounded.

“It’s like, ‘Hey, how you doing?’ with your elbow,” he said. “Pete’s not even getting close to you. He’s gonna be at least seven to eight feet away.

“I would be lying to you if I said it’s not tough, not being in the building and being around a lot of the guys, watching film together and working out. But the whole world is going through this pandemic. A lot of people (are) going through worse things.”

Elbow bumps aside, few people are going through better transitions than Adams. He helped make his own bed, and is happy to lie in it.