Pac-12 football players say they will opt out without upticks in COVID safety, salary cuts, pursuit of racial justice and economic equity. A look at the good and the bad. 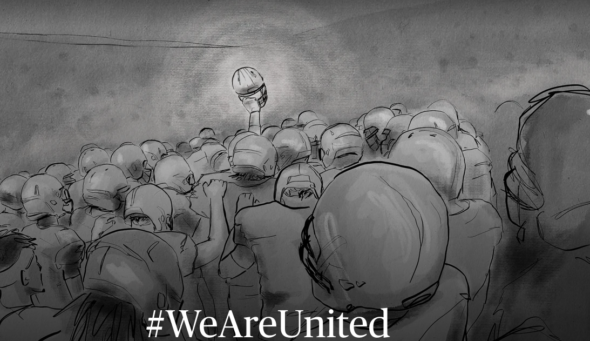 The Pac-12 schools were sent a message by their football players. / Players Tribune

The NCAA’s worst nightmare is becoming a reality: An organized revolt by football players at big-time schools to end the long-established collective exploitation of  athletes.

The argument could be made that the revolt couldn’t have been more poorly timed, when a pandemic threatens to wipe out a season of the cash cow of football. The response: The NCAA has had 114 years to reform itself, encouraged by many inside and outside to do so. It whiffed.

A group of Pac-12 Conference players claiming to represent “hundreds” of athletes published Sunday in The Players Tribune and headlined #WeAreUnited, a document that says players will opt out of play in the 2020 season if their demands are not met regarding issues of COVID-19 safety, preserving all varsity sports, ending racial injustice and developing economic equity. (See below for details.)

The news release is signed “Players of the Pac-12,” and includes the names of 12 players representing nine of the 12 schools in the conference, including two Washington Huskies, redshirt juniors LB Joe Tryon, who led UW with eight sacks last season, and WR Ty Jones.

Here’s a list of the players on Pac-12 schools that are listed as media contacts. They are the voices of their specific campuses. None I see from Utah, USC or Colorado. Jevon Holland is biggest name, a potential first-round pick. pic.twitter.com/czS57DDJg9

“We are being asked to play college sports in a pandemic in a system without enforced health and safety standards, and without transparency about COVID cases on our teams, the risks to ourselves, our families, and our communities,” the statement read. “We will opt-out of Pac-12 fall camp and game participation unless the following demands are guaranteed in writing by our conference to protect and benefit both scholarship athletes and walk-ons.”

The Pac-12 announced Friday its plan for a 10-game conference season starting Sept. 26, pending developments with the spread of the virus. But six of the 12 schools are in two states, California and Arizona, where infections are rampant. When news broke Saturday of the protest, the conference, which said it had not received any statement or information directly, put out a mushy, non-specific response.

“We support our student-athletes using their voice, and have regular communications with our student-athletes at many different levels on a range of topics,” it said. “As we have clearly stated with respect to our fall competition plans, we are, and always will be, directed by medical experts, with the health, safety and well being of our student athletes, coaches and staff always the first priority.”

However, Pac-12 Commissioner Larry Scott said in May that sports would not go on this fall if students were not attending classes in person. But as school after school unrolled plans for limited or no in-person instruction, the conference appears to be slip-sliding on Scott’s commitment about wanting students on campus. Players rightly want to know what to believe from their overlords.

How is a campus unsafe for regular students but OK for the football entertainers?

While it’s true that Pac-12 athletic departments have reported few confirmed cases of positive tests upon intake — Jon Wilner of the San Jose Mercury News reported July 21 that there were 28 positives from more than 1,300 tests administered (2.16 percent),  including sports other than football — six schools are not reporting any results. That’s why one of the players’ appeals was for transparency.

And there is no part of the Pac-12 safety protocol that includes a bubble existence of weeks for the pro leagues like the NBA, WNBA and NHL. Most UW players live in off-campus apartments around Seattle, where confirmed cases continue on an upward path.

“We were hoping by fall camp (that) this stuff can kind of be sorted out,” Hobbs said. “The main thing is, the COVID concern isn’t something we want to be negotiated. The other stuff is definitely a lot to handle, and it’s definitely going to take time to negotiate. But we kind of want this process to just start and see the Pac-12 take leadership and enforce some of these standards and enforce some of these rules to just help us out in a way.

“I believe we need the basic rights and benefits that will help our future. We are all grateful for what we have but there is so much more that would create generational change.”

It isn’t clear how many athletes support #WeAreUnited, and whether there are others who aren’t agreed about a mass opt-out. Nor is it known with whom the Pac-12 would negotiate to reach any compromise on the demands.

Those difficulties are typically how the NCAA and its schools get away with exploitation — footballers start out mostly as scared teenagers grateful for the opportunity and have neither the desire nor the time to organize a challenge to the colossus of big-time college sports. And they fall under the jurisdiction of coaches typically paid millions, who dominate the kids’ fates over four years to preserve the status-quo of a system that enriches the coaches.

But there is no longer a status quo — a global public-health disaster combined with global protests over systemic racism, both of which have contributed to a crashing of the U.S. economy, have severely disrupted big-time sports.

The disease and the money crisis have disproportionately impacted Black families, whose sons occupy the majority of roster spots in big-time football. Sports enterprises are desperate to return to business, and need the cooperation of players to assume greater health risks.

Despite several attempts, a union has failed to materialize to protect college players’ workplace interests, partly because the entire workforce turns over every four years. Nor is arbitration or litigation a cheap, easy tool to resolve grievances for college kids.

But the chaos has finally provided players with some spontaneous leverage.

“They see all of this clearly through the lens of racial justice,” Ramogi Huma, the founder of a college athlete advocacy group called the National Collegiate Players Association, told ESPN. He said the players reached out to him a little more than a month ago because they did not feel there was enough being done to ensure safety.

“Right now it’s clear that the conferences don’t need the NCAA. Each conference is an industry unto itself,” Huma said. “(The players are saying) we’re fine if our conference doesn’t belong to the NCAA at all. We need to be treated fairly.”

The COVD-19 safety issues are no-brainers. The Pac-12 should agree. Reports nationally said that some schools were asking some players to sign waivers absolving the program of liability regarding the virus, which was unconscionable. A spokesperson for Huskies athletics said no waivers were requested from UW players.

Regarding the demand that all varsity sports programs be preserved by cutting the pay of Scott and coaches, that sounds noble and fun, but the players have no standing to make that request. Salaries are determined by administrators and the marketplace, not players. And endowments are funds received for specific purposes and not subject to re-purposing.

Regarding advancing the cause of racial justice, addressing the issues in a formal way is another no-brainer. But the two-percent diversion of revenue to fund Black-community solutions sounds fraught with peril for all. Not a hill to die on.

Regarding economic freedom and equity, some of the proposals are already underway, and the protest threat could hasten arrival. What is truly wacky is the idea of taking 50 percent of television revenue and distributing it “evenly among athletes in their respective sports.” This isn’t MLB, NFL or NHL — yet. The complete professionalization of college athletics is an aspirational goal, which requires a business reformation whose time has not come — certainly not by mid-August. But six-year scholarships and a one-time transfer without punishment? Overdue.

Overall, the Pac-12 players should be commended for the effort to use the new-found leverage to gain traction for themselves and future athletes in pushing back against the colossus.

Undoubtedly #WeAreUnited has created a giant WTF in the thought bubbles above the heads of Scott, presidents and administrators. But that’s the consequence of dithering about installing storm windows when the Cat-5 hurricane has pulled into the driveway. 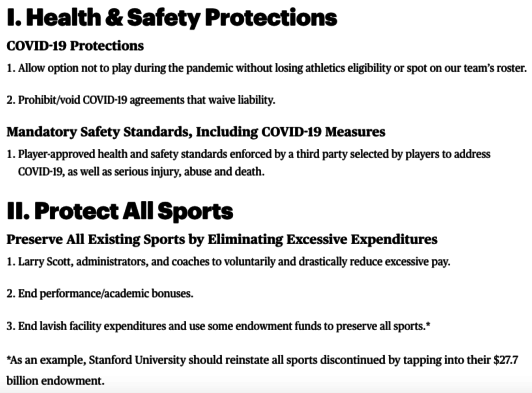 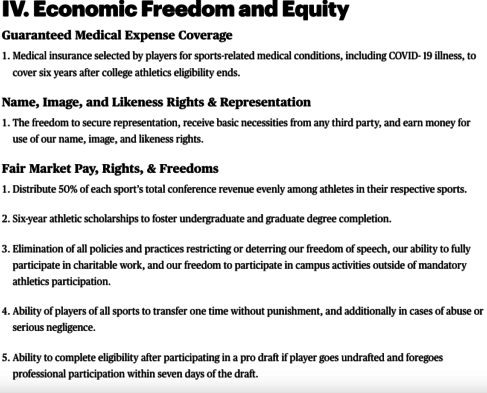