Prosecutors in Florida surprisingly dropped felony robbery charges against CB Quinton Dunbar. If NFL clears him, he will conclude a big makeover of the secondary. 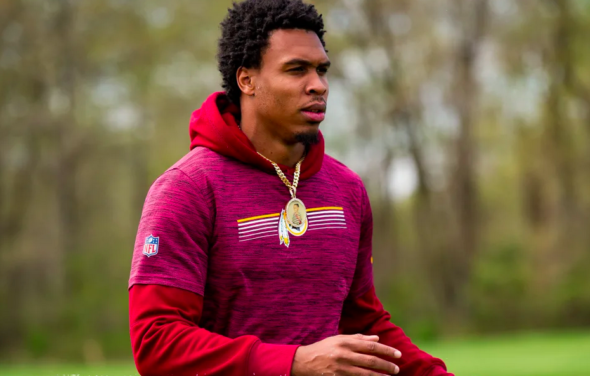 The Seahawks gave up a fifth-round pick to Washington for CB Quinton Dunbar. / Redskins.com

That means the fourth-year pro, acquired in May for a fifth-round draft pick from the Washington Football Team, could rejoin soon a Seahawks secondary transformed from 2019’s mediocre outfit. Pro Football Focus rated Dunbar the No. 2 cornerback in 2019.

(UPDATE Saturday) Dunbar, 28, will be removed from the commissioner’s exempt list, making him eligible to join the Seahawks training camp Sunday, NFL.com reported. The NFL will investigate further if new information is disclosed. He will have to undergo COVID-19 testing for three days before taking the field. (end update)

His co-defendant in the bewildering May 13 episode, New York Giants CB DeAndre Baker, remains charged with four counts of robbery with a gun, accused of stealing cash and watches from four men at the party.

Dunbar’s attorney, Andrew Rier, told The News Tribune that he expects Dunbar to be moved off the exempt list shortly and allowed to fly from Miami to join the Seahawks in training camp at team headquarters in Renton, where non-padded practices begin Wednesday.

“I’m extremely happy,” Rier told the TNT. “I think the Broward County prosecutors did the right thing in dropping the charges against Mr. Dunbar. I can’t wait to root for him on the football field this fall.

“He did nothing wrong. He is innocent.”

Dunbar’s previous attorney, Michael Grieco, claimed to a judge that the partygoers made up stories about Dunbar’s involvement in the robbery, and had affadavits from each recanting the details they gave police that led to Dunbar’s arrest. He was released on $100,000 bond.

In July, the New York Daily News broke a story that said a witness saw the four victims get paid $55,000 in Grieco’s Miami office for those statements recanting the original claims. Dunbar switched attorneys shortly thereafter, and Grieco is under investigation by the Florida bar.

The full story likely awaits the trial of Baker, a 2019 first-round pick of the Giants. If  convicted, Baker, 22, faces a mandatory minimum sentence of 10 years and up to life in state prison.

The Seahawks, meanwhile, complete the secondary makeover with four accomplished veterans. The only holdover from the 2019 start is Shaquill Griffin, 25, who had a breakout year that included a Pro Bowl appearance, and will join Dunbar at the corners. The Seahawks last week traded for All-Pro SS Jamal Adams, 24, from the New York Jets. Quandre Diggs, 27, was acquired from Detroit Oct. 31, and was a difference-maker in his five regular-season and two post-season starts.

The Seahawks still have returnees CB Tre Flowers, CB Ugo Amadi and SS Marquise Blair to compete for the slot corner job in the nickel formation.

Including first-round pick LB Jordyn Brooks, it appears coach Pete Carroll has no further tolerance for being embarrassed on defense. Now all the Seahawks need is a season.