Via Twitter, Seahawks fans have for years implored Pete Carroll to #LetRussCook. Now Wilson has boldly joined the chorus. The man has new swagger. 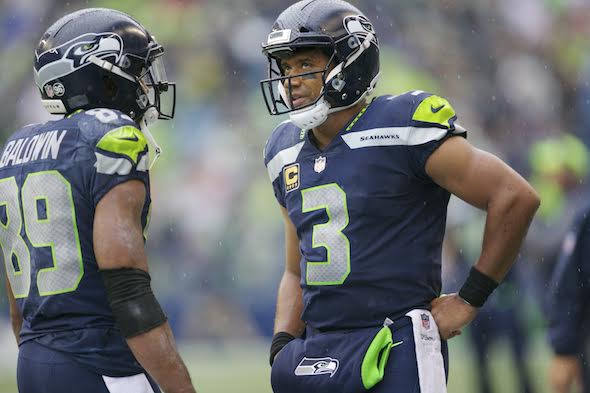 Russell Wilson has a serious swagger about him in camp.  / Drew Sellers, Sportspress Northwest file

For the record, Russell Wilson denies he has ever retweeted the popular Twitter hashtag #LetRussCook.

But it sounded Thursday as if he’s thought a whole lot about the notion behind it.

In fact, in a 2½-minute response to the much-debated matter — if you’re a non-tweeter, most of the football world insists that coach Pete Carroll throttle back the Seahawks’ run game to let one of the NFL’s best QBs flourish early as well as late — Wilson, smiling a lot, basically said gimme the chef’s hat.

“That doesn’t always mean just me chucking it around, but it it does mean that the more times I have the ball my hands, the more things I think can happen,” he said in a Zoom conference with local reporters from training camp. Asked if he agreed with the hashtag’s sentiment, he said, “Yeah, I definitely think so.”

So now we have official drama in camp.

Will Carroll give up the Flintstones playbook and hand Wilson the Jetsons playbook? Will Wilson on his own tear off Carroll’s imposition of the Clark Kent dress code in the first quarter and let Superman swoop all game over the Lex Luthors of the NFL?

We deploy cartoon imagery because it is a cartoon argument.

Many things go into playcalling that are likely unknowable from the stands and pressbox — hurting (but not injured) players on both sides, earlier plays designed to make counters work later, game-plan changes, etc. The fan’s fastest fury is summoned after a run gets stuffed when a pass should have been the obvious call, and vice versa.

Having said all that, there’s this: The Seahawks have won their past 57 games in a row when leading at halftime by four or more points (a stat Wilson mentioned), yet in 2019 were 29th in the NFL in first-half pass attempts per game.

We know that Wilson, in 143 career games, has guided the Seahawks to an NFL-best 32 fourth-quarter/OT comeback wins, including five in 2019 when the Seahawks finished the regular season 11-5 despite cumulatively outscoring opponents by seven points.

Wilson’s ability to make something late out of nothing, air or ground, is staggering. He has saved more games than Imelda Marcos saved shoes.

But how about playing from ahead once in a while?

We all know of Carroll’s deep affection for the run game. The Seahawks in 2018 led the NFL in rushing attempts as the only team that ran more than passed (53 to 47 percent), and was third in 2019, behind Baltimore and San Francisco. More than mere passion, Carroll’s fear of early turnovers (“it’s all about the ball”) guides his approach.

But is it not possible to take a few more risks early with a QB of Wilson’s accuracy,  knowledge and judgment? Yes, he’ll have a stinker game or two every year, but is it necessary to bring every outcome down to Indiana Jones barely outrunning a giant rolling boulder?

Here’s how Wilson put it:

“Do some fun things in the fourth quarter, but let’s treat every quarter as the fourth . . . I definitely believe that I can help us win. Whatever way or fashion that is, I’m willing to do and I’m excited about that.”

Whether Carroll is similarly excited remains to be seen. The Seahawks last year produced a second quality target in DK Metcalf to go with Tyler Lockett, and in the off-season brought in veteran free agent Greg Olsen to accompany a healthy Will Dissly at tight end. RB Chris Carson — who is dealing with a family death and has not yet reported to camp — is said to be healthy as well.

The mystery, as always, is the line, where only one position, left tackle with Duane Brown, is a sure thing. In a season with zero exhibition games, all lost to the coronavirus, it’s a bad time to throw together a line.

But above all, the Seahawks have Wilson, despite the tumult in the world that left him despairing a couple of months ago.

“For me personally, it was a difficult off-season,” he said. “(Ciara) being pregnant (the couple gave birth to a healthy boy named Win Harrison Wilson), everything else changing around the world. In our own personal communities, it was pretty heavy.

“At the same time, the quality time I was able to spend with my teammates and also my family, while (in) an unfortunate time, was one of the greatest gifts.”

In words and tone, Wilson at 31 has never had such public swagger.

“When I step on the field, I want the other team to know they’re in trouble.”

Forks up, people. You too, Pete. The man shall cook.