Thiel: Upon Seahawks’ Collier, much depends

Given his first-year bust, DE L.J. Collier is the guy who has to improve the most for Seahawks to have the best shot at big success. But Benson Mayowa also has an idea. 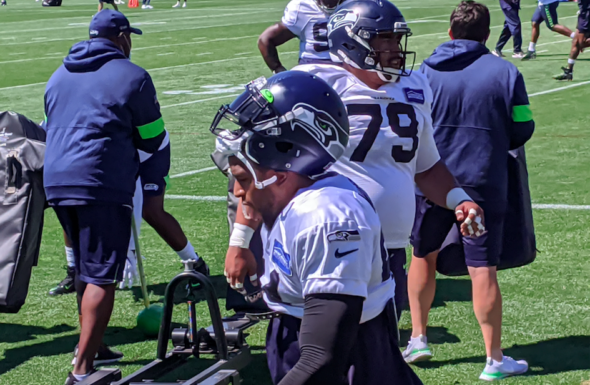 As the gradual acceptance of facsimiles becomes a standard of U.S. life, the Seahawks’ first time in shoulder pads since the dark and cold of a January night in Green Bay seemed, you know, like real football.

Blockers blocked, defenders defended, quarterbacks threw and receivers caught.  No tackling yet, but players were knocked down and got up with grass stains. Newcomer SS Jamal Adams even intercepted a Russell Wilson red-zone pass and swooped the length of the field, ball held high.

The dream-state was enhanced by a cloudless day with a cool breeze off the lake, making it easier to drop one’s guard, and be open to crazy football ideas.

Like, say, DE L.J. Collier being a quality contributor.

Could be sunstroke. But as you know, coach Pete Carroll thrives in these uncertain moments, a man capable of selling rainbows at night. He used his Zoom presser Monday to make the case.

“He just looks different,” he said of the 2019 first-round draft choice, who played 152 mostly invisible snaps last season. “I talked to him for a while (Sunday) about coming off the draft year, and then all of the confusions and all of the distractions, and that he probably was not in his best shape, because I see now, he looks like a different guy.

“He’s quicker. He’s explosive. He’s in great shape and he’s battling. He wasn’t ready last time around, getting into camp and getting hurt. We get a chance to find out, but he’s off to a terrific start.”

A week of drills is not much of a database, nor is early enthusiasm from Carroll unusual, for just about anyone. But the facts that Collier showed up out of shape and unprepared from Texas Christian were fresh disclosures beyond the severe ankle injury in training camp that was the main cover for his lost rookie season.

How a top draft choice could be unready for the big time is a tad unfathomable, although not unprecedented (see Malik McDowell, 2017). Nevertheless, Collier is back, with a fresh title — player from whom the biggest improvement is needed for team success.

Carroll didn’t say that. But I’m happy to say it for him.

An argument can be made that the offensive line, with three spots missing incumbents, is more urgent. But the Seahawks have hired two veteran free agents and a third-round draft choice, Damien Lewis from LSU, for those vacancies.

That doesn’t mean the Seahawks can’t still re-sign Clowney. He’s out there somewhere, Yeti-like. And they could pull a Sheldon Richardson-type deal for someone during the opening week of the regular season. But the last best guy in that category this August, ex-Viking Everson Griffen, took a one-year, $6 million deal from the Dallas Cowboys.

In acquiring Adams for bank that made owner Jody Allen look over the top of her glasses at GM John Schneider, the Seahawks have made their move on defense. They will have to make do with a pass rush improved by veteran free agent retreads Bruce Irvin and Benson Mayowa, and perhaps a little by Adams (six sacks with the Jets in 2019).

Even with Clowney, they had 28 sacks last season. Only one team had fewer. So how is that part of the program better? They have back veterans Rasheem Green and Branden Jackson, and may get a little help from two rookies, second-rounder Darrell Taylor (absent while recovering from foot surgery) and fifth-rounder Alton Robinson.

Clearing his throat, Mayowa would like to interject an alternative view.

“Sacking the quarterback takes a village,” said Mayowa, in 2013 a kid out of LA and the University of Idaho who who won a Super Bowl ring with the Seahawks as a deep reserve who played two games. “It don’t matter who the other guys are. You just take a village of guys with the same mind-set and working together, to get to the quarterback.

“You don’t need the big-name guys here. It’s always been to have a big name. You just need eight (ends in a rotation) working their asses off together.”

As an an example, Mayowa, 29, could cite his 2019 season with the Raiders. He was a rotation guy who never started. But in 15 games, he had seven sacks, 10 QB hits, five tackles for loss and three forced fumbles.

If those numbers had been attached to Clowney’s 2019 season, he’d be hired by now. Mayowa may be on to something.

“It’s a little different when you start to mix and match our guys,” Carroll said. “We do have some depth. We have guys who give us some real good athleticism.

“it can be a really fast defense. It’ll start with those guys’ ability to run upfront.”

As far as can be seen in these days of uncertainty, that’s the Seahawks plan for the pass rush: Make it all about speed with Collier, Irvin, Green and Mayowa. Then pick up a side hustle as football’s Village People.