Thiel: Dunbar’s saga gets no help to put it to rest

Seahawks new CB Quinton Dunbar says his “name is cleared” of armed robbery charges. Maybe so, but he could have done better in the court of public opinion. 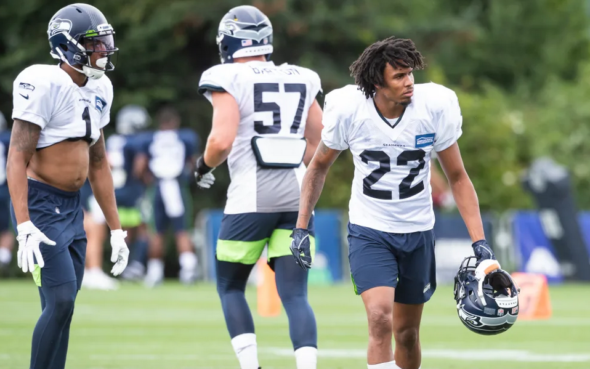 It’s probably a bit unfair to ask Quinton Dunbar to give a full version of the strangest non-pandemic event in the Seattle sports year — two months after being acquired by via trade, the Seahawks conerback was arrested on four counts of felony robbery near his Miami hometown. Three months later, the prosecutors declined to press charges against Dunbar, even though the case continues.

But, hey, life is unfair. What’s up with that episode, Q?

“I can’t really comment on that situation, with the case still going on,” he said Friday on a Zoom call with local reporters. “So I can’t really speak on what happened.

“But the truth will eventually come out.”

C’mon, man. At least explain who those four dudes were that claimed you and Giants CB DeAndre Baker shook them down at gunpoint at a house party for cash and jewelry worth about $73,000. Were they friends, relatives, strangers, crooked cops, what?

“Honestly, I don’t know those guys,” he said. “Never met those guys the day before I encounter(ed) them,” he said Friday. “I pretty much don’t know nothin’ about these guys.

“At the end of the day, I’m good. My name’s cleared. That’s all that matters.”

Well, actually, no. That isn’t all that matters. And until there’s an explanation, your name in the court of public opinion isn’t cleared, for whatever that’s worth to a professional athlete, which I think counts for something.

It’s true that if Baker goes to trial in Broward County, Dunbar likely will be called as a witness. It’s also true that the NFL is looking into the case and could render a suspension even in the absence of official charges, per agreement with the players union.

So yes, the fifth day of practice with the team is not yet a good time to fully explain the saga, rich with plot twists such as Dunbar’s first lawyer ending up being investigated by the Florida bar.

But he, and/or the people who care about him, like the Seahawks, needed to have provided something that mad him sound less like he’s hiding something. The story made national headlines for weeks, especially in New York, the NFL headquarters and the home of Baker’s team.

A better response doesn’t have to sound like lawyer-speak, just something a little more direct and humble than the awkwardness Friday, which brought little clarity for anyone.

Because the case is still on, I can’t speak to what happened May 13. Since the NFL is looking into it, a suspension is still possible. I  don’t feel like I should apologize because I didn’t do anything wrong. The charges were dropped.

Having said that, I regret having allowed myself to be put into a position to embarrass myself and my new team. I understand it’s a strange story and I hope someday to be able to tell it. Meantime, I’d like to ask my teammates, coaches and Seahawks fans to extend to me the benefit of the doubt, and allow me to prove I’m the person I say I am.

Asking for the benefit of the doubt after taking a bit of responsibility and expressing regret is a way to give himself room to do his job and his audience room to cut him some slack.

For most fans, that expression wouldn’t be hard to accept. A missed opportunity.

Meanwhile, it was plain from his description of the personal, not just legal, ordeal, that he had been scared spitless.

“I mean, a few months, when you are facing armed robbery, man, that carries (a) life (sentence) in Florida. I mean, really, that’s self-explanatory,” he said. “It’s just a hard pill to swallow.”

He grew up in Overtown, a hard place in Miami, played college ball at Florida in Gainesville, and was an undrafted free agent wide receiver who spent his first four NFL years mostly as a reserve learning to play defense in Washington before a breakout 2019 with 11 starts.

Until the Seahawks traded for SS Jamal Adams, Dunbar, 28, was considered the team’s top off-season acquisition. He was penciled in as a starter opposite CB Shaquill Griffin.

The arrest crushed him.

“I wasn’t even really worried about football at the time,” he said. “I was just worried about clearing my name . . . I was depressed. I didn’t really do anything, couldn’t eat.

“Growing up where I come from, man, it wasn’t nice . . . I felt like before that situation, (my life) spoke for itself. Never been to jail, never been in trouble, never (had an) encounter with the police from doing anything illegal. Now all of a sudden, when I make it this far, where everything I grew up wanting, and I just put it out there on the line for something silly like that?

“People going to believe what they want. I know who I am and what I stand for. That’s all that matters to me.”

That’s a good foundation, but the NFL is a place of intense scrutiny. To flourish, players have to play a game outside the game, which includes trusting few taking responsibility. He seems to get that now.

“Because everybody don’t have great intentions.”

One of my favorite writers, longtime columnist and novelist Carl Hiaasen, once said of his home state, “The Florida in my novels is not as seedy as the real Florida. It’s hard to stay ahead of the curve. Every time I write a scene that I think is the sickest thing I have ever dreamed up, it is surpassed by something that happens in real life.”

Perhaps Dunbar can meet up with Hiaasen. There’s somebody who could tell this story, adding a stripper, a trailer park and alligators. Unless that’s already part of things.