Former Seahawks star, fired by Ravens, is often oblivious to consequences of his words and deeds. He once said to a rival coach, “Come get me.” Who dares now? 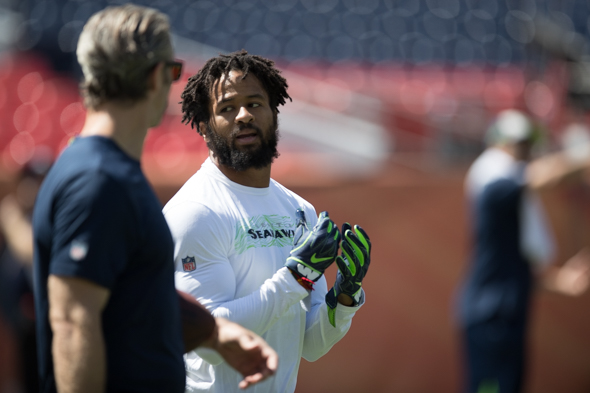 Nothing will change the fact that Earl Thomas was a spectacular contributor to the greatest sustained team success in Seattle’s modern history of pro sports.

In his continuing role as NFL drama king, however, he appears to be — to borrow Russell Wilson’s anointed nickname for himself — Mr. Unlimited. His fans hope the latter speculation doesn’t obscure the former truth.

Thomas Sunday managed to get himself fired from one of the NFL’s more successful teams, the Baltimore Ravens, for conduct unbecoming.

We have terminated S Earl Thomas’ contract for personal conduct that has adversely affected the Baltimore Ravens.

After fighting in practice Friday with a teammate, SS Chuck Clark, over a busted coverage — an episode that Thomas later admitted on social media was his fault — and getting sent himself sent home by coach John Harbaugh, the Ravens pushed the nuclear button on the relationship.

The stunner could cost the Ravens, who signed him to a four-year, $55 million free agent deal after he left Seattle, as much as $15 million this year and $10 million next year, although they could claw back some of the money should they win a grievance hearing.

Thomas on social media seemed take the blow with equanimity:

Seahawks coach Pete Carroll has never betrayed a moment of bitterness toward Thomas, even after receiving a middle-finger salute as the All-Pro safety was carted off the field at Arizona Sept. 30, 2018, a broken leg ending his Seattle career. But Carroll’s lament Monday was mild.

“It’s been a tough time for Earl,” he told Seattle-area reporters via Zoom. “That’s a hard situation. I feel bad for him. I wish he could have avoided that from happening, whatever that was . . . that’s a bad state to get in when they send you home.”

Indeed, it is bad a state for Thomas, 31, now a free agent — don’t even ask: The Seahawks are thrilled with their safeties, Quandre Diggs and Jamal Adams — but dismissed by two of the game’s best coaches. Harbaugh had reasons beyond the fight, according to Peter King of NBC:

He was not well-liked by his teammates. He had a pattern of being late, and in a recent practice, he made multiple assignment errors, causing defensive teammates to confront him about his preparedness. He missed at least one walk-through with no valid excuse. When the incident at Friday’s practice happened, very few if any teammates came to his defense. Teammates backed Clark, the significantly lesser name.

That doesn’t sound like the Thomas known around here, where he was a diligent, intense worker whose habits drew admiration from from his fellow travelers.

Perhaps things have changed since the notorious episode in April when his wife, Nina, was arrested in Austin for domestic violence when she caught Thomas and his brother in bed with women and pointed a gun at his head.

Thomas does have a way of sometimes being oblivious to the consequences of his deeds.

They can be small, like the time after the Seahawks lost 42-7 to the Rams, the worst home defeat of the Carroll era, when Thomas, responding to questions about Seattle’s numerous injuries, said LB Bobby Wagner’s sore hamstring limited him too much.

“To be totally honest, my personal opinion, I don’t think they should have played,” he said. “I think the backups would have did just as good . . . I think (Wagner)  just waited a little bit too long to take himself out.”

Thomas was being honest, and perhaps right. But those sorts of critiques in public are rare among players. An incensed Wagner heard the quote and fired back on Twitter that evening, since deleted, telling Thomas “to keep my name out yo mouth.”

And the episodes can be larger, such as after the Seahawks’ Christmas Eve 2017 win over Dallas, when Thomas sought out Jason Garrett entering his locker room, urging the Cowboys coach on national TV to “come get me” if he couldn’t work out a contract extension with the Seahawks.

When reporters asked why Thomas made such a startling move, Thomas shrugged and was dismissive: “People take life too serious. That’s just who I am.”

Part of who Thomas is, then, is that he is unfiltered — a dead-honest guy who isn’t always aware of the consequences. He has no filter.

So I asked Carroll Monday if he agreed.

“I don’t agree with that at all,” he said. “I get that maybe to you he was like that, but he wasn’t like that to me, or here. He was very quiet, very much to himself, and rarely spoke. I didn’t call on him that much because I knew he was uncomfortable with speaking out.”

The issue wasn’t about whether he was outspoken, as if he were Richard Sherman. The issue was whether Thomas understood how his words and deeds impacted people in ways he didn’t realize.

I asked Carroll whether the Garrett episode was an example of that.

“He didn’t weigh the situation,” Carroll said. “He thought it was really a harmless gesture. Because there’s media, it wasn’t harmless, in that it was brought out and questioned.

“I didn’t care. I didn’t worry about it. I know where he’s coming from, and it didn’t bother me a bit. I didn’t think was the right thing to do. I told him that. But, you know, so what?”

True, it wasn’t a huge deal. But Carroll made my point — Thomas didn’t weigh the situation. Same with Wagner. Same with the finger episode. Maybe it’s also part of what happened with his wife, and with the Ravens.

Sometimes people of high achievement are like that. The behavior isn’t out of spite, or meanness or malevolence. It’s an initial obliviousness of consequence to others. Where that comes from is hard to say. But it seems to be part of why he lost his job and potentially $25 million.

I asked Carroll if there was any consequence for Thomas regarding Garrett episode.

Maybe. If Thomas comes to back to town and I can buy him a beer, I might find out. He’s honest that way.

But I’d rather hear from Thomas that he’s in counseling. Neither Carroll nor the rest of us, including future NFL employers, can know him until he begins to know himself.