The COVID-19 shutdown made it a bad time for Seahawks to be breaking in a mostly new O-line. But Schottenheimer says his guys won the Zoom meetings. Really? 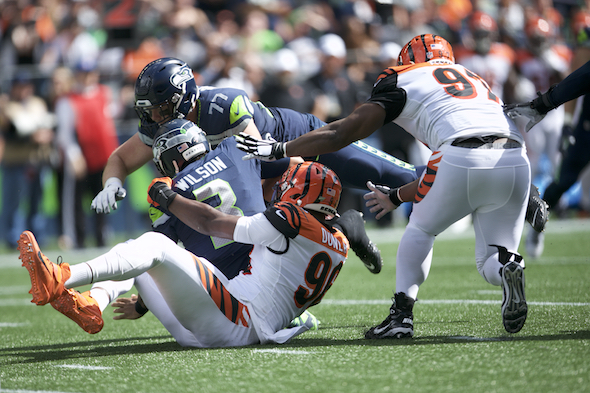 The most noteworthy impediment to the #LetRussCook movement by many 12s is the regular inability to keep the varmints out of the kitchen. Nobody eats when the chef is skittering past the cooktop, looking to climb a footstool.

Seahawks coach Pete Carroll and his viceroy, offensive coordinator Brian Schottenheimer, understand this, and often call a run-heavy, lower-risk game early. As defenses inevitably wear down, QB Russell Wilson gets busy, by air and land, and the Seahawks, to cite a recent set of outcomes, in 2019 win 10 regular-season games and a playoff game by eight points or less, an NFL record for drama.

But lordy, do those meals produce indigestion. And at some point, the varmints will take a bite out of the cook.

According to Pro Football Focus, the Seahawks’ rate of pass pressures allowed after 2.5 seconds in 2019 was third-worst in the NFL, ahead of only the Jets and Dolphins. For his career, Wilson’s dropbacks have resulted in rush pressure 42 percent of the time, the only QB in that time period over 40 percent.

So the relative inability to protect Wilson has produced a layer of necessity atop Carroll’s longtime allegiance to “pounding the rock,” as he described it sarcastically this week.

To the surprise of some critics, Carroll is not oblivious. He let go three O-line starters, Germain Ifedi, D.J. Fluker and Justin Britt, plus backup center Joey Hunt, partly in an effort to get better pass pro.

That’s a lot at once. Unfortunately for him, the need for mass replacements came a bad time.

The COVID-19 shutdown cost NFL teams their organized team activities, their mini-camps and their four preseason games. Other than the teams installing new coaching staffs, the loss of practice time hurts most a team with an O-line chubby with newbies.

So given the chowdered calendar, the chance for an opening-game clank on offense is much higher than usual. Right?

Recall that in the 2019 opener against a mediocre Cincinnati team, the Seahawks won 21-20 at home. Wilson completed 14 of 20 passes, including five to wide receivers (how does a modern NFL team win a game with five completions to wideouts, on a sunny September day?). And that was with a veteran line that LT Duane Brown said in the preseason had “a chance to be one of the best in the league.”

For what it’s worth, PFF ranked the Seahawks O-line 28th last season.

As for the 2020 preseason, despite the impediments, Schottenheimer is enthusiastic, which is, of course, the minimum operating level for a Carroll assistant.

“I think we did it better than anybody,” he said on a Zoom conference Tuesday. Since all practices until the past two weeks were virtual, with players and coaches in their homes, I’m not sure how he knows that. Maybe there’s league-wide analytical measurements for trap blocks on living-room furniture per Zoom minute, or something.

But as with many things these days, we just accept someone’s word for it, and move on.

“You know, those stats are very interesting,” he said. “Most people look at (pass protection) that it’s just the offensive line, right?  They might block everything beautifully, and the defense brings too many guys. Or there’s (a failure) to adjust by a receiver, or a tight end, to take the hit, or maybe it’s the back.

“From time to time, Russell is back there hunting and he’ll end up holding it a little bit too long. Those (PFF) numbers can be very misleading at times.”

The No. 1 unit in camp so far has the two veteran returnees on the left side, Brown and guard Mike Iupati. Fourth-year Ethan Pocic is at center. Rookie third-round pick Damien Lewis is the right guard, free agent signee Brandon Shell, 28, is at right tackle. Plus the 35-year-old newbie tight end, Greg Olsen.

“I think that this group of of offensive linemen — the protection group in general — we’re better off than we’ve been in understanding of our rules, our adjustments, and how to solve problems,” he said. “That’s a huge huge part of it, (done) with countless hours of talking through these looks over and over in the Zoom meetings.

“Our defense is throwing some fun stuff at us. We’re troubleshooting our protections, making sure that we see things the right way. No question we want to improve that (rush pressure) number. But it’s not just the offensive line, it’s us as a whole being better.”

Since there’s little else to go on, Schottenheimer gets the benefit of the doubt in August. By the late afternoon of Sept. 13 in Atlanta, we’ll begin to know whether Wilson will be able to cook, should he go wild and complete eight or nine passes to wideouts.