Thiel: ‘Players are frightened for their lives’

He couldn’t be more blunt, and more right: Pete Carroll wants white people to figure out why black people, including Seahawks players, are scared, and fix it. 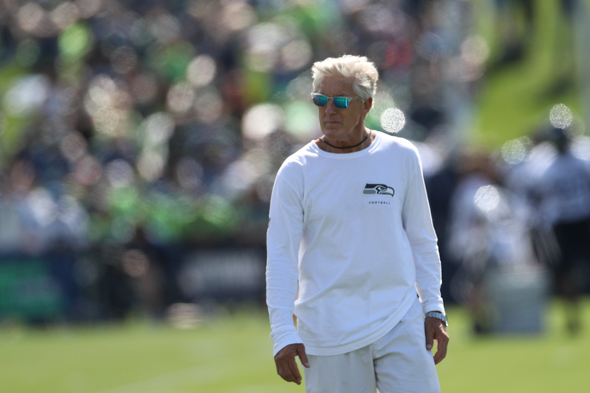 Pete Carroll said, “Our players are screaming at us: ‘Can you feel me? Can you see me? Can you hear me?’ “/ Drew McKenzie, Sportspress Northwest

Pro football and pro basketball are the only two high-profile industries in America where most of the employees are Black and well-compensated. Which explains why major sports are about to become ground zero in the culture wars that will be turned to 11 until Nov. 3.

In dredging up the “law-and-order” trope from George Wallace’s racist 1968 campaign, Donald Trump seeks to become the second president of the Confederacy by connecting “ungrateful” protesting players to a Black Lives Matter movement he describes as domestic terrorism, which he claims only he can thwart.

The Democrats will condemn the mendacious portrayal and seek to lionize the players’ righteousness, putting pressure on every word, action or inaction by team owners, university presidents, coaches and players, many of whom are ill-suited to the political fray.

In the middle are many fans of either side, aghast at the defilement of sacred grounds — football weekends. Already denied admission to the games because of COVID-19, they are now denied safe haven from politics.

If and when games are played, the pre-event demonstrations will be fully discussed on TV, because the networks, and especially the colleges, cannot be seen as insensitive to the newly won high ground occupied by the entertainers.

Into this sports dystopia leaps Pete Carroll. Well, he was already there. But Saturday, the Seahawks coach threw down hard.

In his remarkable 15-minute monologue (transcript here), Carroll opened his heart on his views about perniciousness of white ignorance of Black travail in America.

Perhaps the most powerful part was his pullback of the curtain on the genuine trepidation players have once the uniform is off and they head into the streets as civilians and not gladiators in town garb.

More racism anecdotes are being shared publicly by players in all sports, but it is still hard for macho young athletes to be seen in media as scared. But not to each other, and apparently not to Carroll.

“So they’re crying out again, calling for us white people to figure it out and to listen and and to fix all of the obvious problems that we know. We all know it’s out there.”

The public murder of George Floyd and the public shooting of Jacob Blake have turned the police-conduct storm into a hurricane. But the threat from authority to crush a minority population has been there for hundreds of years and won’t abate until whites get uncomfortable enough to care.

Black people want to “get in their car and go to the store and feel safe getting out from the parking lot and going in,” he said. “Because they don’t feel like that right now. That’s the truth and white people don’t understand that.

Another unusual aspect was Carroll’s clarion call to his peer group of coaches.

“This is a calling today for all coaches, specifically,” he said, “to take that leadership opportunity and address all of the situations that we can address with our players and the people that are around the programs. At least, I can touch on the coaches and get to them.”

There’s probably not another coach as empathetic and as passionate as Carroll. But I am certain that most of those coaches now will be asked: If you are not, why not? Not just by media, but also by players. Never before in America’s sports-industrial complex are coaches being asked wholesale to account for their behaviors and racial attitudes. And now, by a prominent member of their own.

I don’t know whether Carroll has a larger strategy here. But it’s a reasonable aspiration to think that if his NFL coaching contemporaries shared his vision, it would be almost impossible for owners to try to stop or moderate players’ expressions. Especially after the phrase Black Lives Matter was emblazoned on NBA courts in the league’s bubble in Orlando.

Owners are the game’s most influential people. They carry much corporate weight. Many of them, including Patriots owner Robert Kraft, are Trump supporters and even friends.

But if players and coaches align their goals — police and criminal-justice reforms, progressive front-office hiring practices, using stadiums as voting centers — to force franchises to accept them as policy, Trump can bellow all he wants. Unlike him, NFL owners can’t fire everyone who disagrees with them and still play ball.

“Black people can’t scream anymore,” Carroll said. “They can’t march any more. They can’t bare their souls anymore to what they’ve lived with for hundreds of years.”

Carroll’s call to action was a faint echo of what Frederick Douglass, the former slave who became America’s greatest human rights advocate of the 19th century, said more than 150 years ago:

Power concedes nothing without a demand.

It never did and it never will.

Find out just what any people will submit to, and you have found out the exact amount of injustice and wrong which will be imposed upon them; and these will continue till they are resisted with either words or blows, or with both.

The limits of tyrants are prescribed by the endurance of those whom they oppress.