RB Chris Carson has earned the respect of his NFL peers. But whether he earns a second contract from Seahawks depends on whether he stays healthy and stops fumbling. 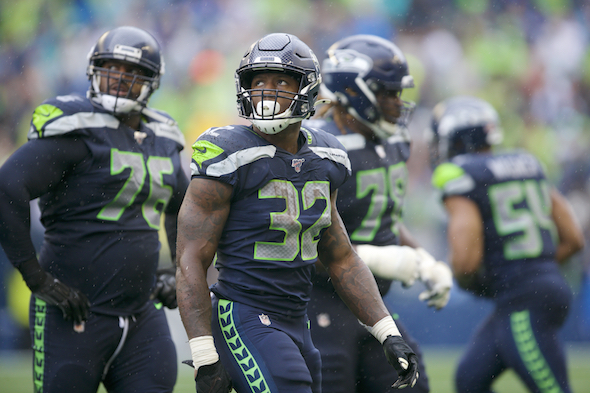 For the first time in his three pro years, RB Chris Carson made the annual Top 100 players list. The rankings are a bit of fluff put out by NFL.com to hype the coming season, and even though no cash is involved, it’s a talker among players as well as fans, particularly since the voters are the players.

Typically a humble, deferential sort — a seventh-round draft pick, you know — Carson, while appreciative, felt his ranking at 96 sold him short.

“I feel like, personally, that spot’s not low enough for me,” he said on a Zoom conference Monday. “I could be a lot lower on that list. But it’s a blessing, just being a part of that. Overall, I’m happy about it.”

Maybe it’s just me, but that sounded more like a harrumph than a hallelujah.

Or maybe it’s the start of a campaign for a new contract.

Asked whether the Seahawks have begun discussions for an extension, Carson said, “Not really, no.”

Well, there’s time. Presuming a normal calendar, free agency doesn’t begin until March. Of course, these days, the world might change six times by then. But on the very day Carson spoke came news that fellow 2017 running-back draftee (second round) Joe Mixon scored a four-year, $48 million extension from the Cincinnati Bengals.

Going back to the Top 100 list, the player behind Carson, former Washington Huskies star Budda Baker, recently was made the highest-paid safety in the NFL by Arizona (four years, $59 million). The player just ahead of him, former Seahawks DE Frank Clark, was given a year ago a five-year, $104 million deal by the Kansas City Chiefs, whom he helped win the Super Bowl in February.

The relationship between the top-100-list and contract value, is, of course, arbitrary because of service time. But Baker, Clark and Mixon demonstrate the company in which Carson now travels.

Whether the Seahawks can or should pay him commensurate with those talents awaits the results of this season, because Carson still has two things to settle.

The two points have nothing to do with his tackle-breaking earnestness: He has to stay healthy and stop fumbling.

Carson has had incompletes due to injury in all three seasons. In December, a hip injury shut him down before the playoffs. It didn’t require surgery, and if his movements in Sunday’s mock game were a fair barometer (they weren’t; no tackling to the ground), he appears ready. This despite time off in August to deal with two deaths in his family, which he politely declined to speak about.

“He looked great today,” said coach Pete Carroll. “He was flying around, looking really light on his feet. He’s got fresh legs.

“We don’t have any hesitation with Chris at all. He’s fine, ready to go.”

Career-damaging injuries are standard fixtures for NFL running backs.  As a run-dependent team, the Seahawks have loaded up against a Carson debilitation by expending draft choices on Rashaad Penny (first, 2018), Travis Homer (sixth, 2019) and DeeJay Dallas (fourth, 2020).

But aside from maintaining premium fitness, there’s nothing Carson can do about the annual poundings.

“I can’t really think about injuries when I’m out there,” he said. “I just play. My mind-set is going to be the same this year as it was last year. That’s just who I am, I guess.”

What he hopes he can address is fumbling. According to Football Database in 2019, he had seven fumbles and lost four, both highs for running backs. If you have been following Carroll, you know that he would rather eat gravel than witness a Seahawks turnover.

“As far as the fumbling, that was something that played a big part last year,” Carson said, “something I worked on in the off-season. You got to have a quick mindset, let that go and just move on and learn.”

True, but Carroll never forgets. And he rarely gives a second contract to a running back, Marshawn Lynch being the one exception.

For public consumption, Carson professed little concern, although he allowed as to how his phone “blew up” with text messages from friends talking up what the Mixon contract might mean for his future.

“Of course, it’s something that’s on my mind,” he said. “You see a lot of guys, they’re starting to get paid, but I try not to let it distract me from the season. I try to push it away.”

He may be a top-100 guy, but Carson is in no position to ask for a new deal now. It would, however, please fans and even Carroll if Carson began the New Year with a big ol’ pile of leverage.