Thiel: Not a good year to be a rookie in the NFL

Practice time has been meager, and distractions many, for the NFL’s rookie class. Seahawks likely will have only one first-year starter. Expect things to clank early. 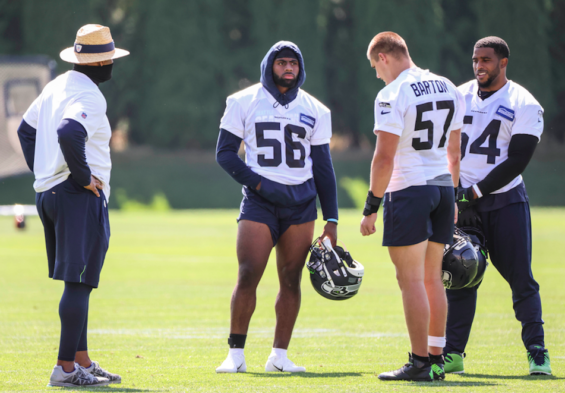 But here we are, looking at the NFL’s annual roster cut-down deadline at 1 p.m. Saturday, when Pete Carroll and his 31 peers take figurative scythes to their 80-man rosters to get to 53.

The Seahawks chose eight draftees, along with a passel of undrafted free agents, and without a single down of pro tackle football with which to judge them, decide their football fates. Hardly impossible, but unique in the league’s modern life.

If that wasn’t awkward enough, the rookies are thrown into a standard foreign camp environment his fall with decidedly sub-standard external conditions: A global pandemic that disproportionately impacts people of color, and a divisive national conflict over race that has led to protests, violence and death, which affects everyone.

Hard to know how much the real-life trauma impacts football players competing for jobs at the highest level. But it’s safe to say, based on the thoughts of a couple of young Seahawks Tuesday on Zoom, it’s greater than zero.

RB fourth-rounder DeeJay Dallas, one of training camp’s most impressive youngsters, said something a bit startling.

“COVID-19, not so much,” he said. “I attribute that to just being regular life now.”

It occurred to me that, at 21, Dallas hasn’t lived enough life yet to miss a lot of the things for which older generations yearn, and his youth makes him more adaptable. He can deal, particularly since his employer continues to employ.

As far as Black Lives Matter and its sports cohort’s tense attempt to alter systemic racism, that’s another story.

“Yeah, sometimes it can become, like . . . gloomy, is the word that I want to use,” Dallas said. “It can be gloomy at times.

“But other times I just try to find joy, like my son and my fiance. I try to focus the best that I can, and when problems arise, that come up in our meetings with the team, or whatever, I just try to deal with it then, and just talk to whoever I can talk to.”

He probably talks to a fellow rookie, first-rounder LB Jordyn Brooks, who is more outspoken.

“It gets a little bit difficult to focus on football when you see these things going on in everyday life,” he said, mentioning police shootings in the streets. “I think that’s been the biggest issue for me, being a Black man. It’s something I kind of take personal, something I feel obligated to talk about, to help.”

The additional stresses presumably are roughly equal around the league, although Carroll allowed himself to stand apart Saturday with his passionate call for fellow coaches to “screw it” when it comes to talking around the hard subject of racial injustice. If there was ever any doubt about Carroll’s position, it’s gone.

Along with the absence of exhibition games, the rookies missed the acclimation that comes with rookie camp, OTAs, mini-camp and in-person unit meetings, all canceled.

There’s no point in complaining. But there’s no doubt rookies everywhere are under-prepared for 2020.

The Seahawks don’t often get first-year starters from the draft, and this year is no exception. Barring injuries, the lone first-year starter Sept. 13 in Atlanta will be RG Damien Lewis. Brooks looks to back up veteran LB K.J. Wright.

Here’s a brief status report, by round taken, of the rookies after watching the three mock games, a few practices, and listening to Carroll and his assistants:

Coming off LSU’s dominant (15-0) national championship team, and coached by Ed Orgeron, a former Carroll assistant at USC, Lewis was prepped for the big time in Seattle about as well as could be expected.

“LSU did a great job, but this a whole ‘nother ball game,” Lewis said. “I feel like that I can come in and compete and be the guy that they looking for.”

As he is wont to do, Carroll gushed about Lewis.

“He’s a special football player,” he said. “He’s got a tremendous body for the position. Hes got great body mass, and he’s really powerful. You can see him in positions already, torqueing, showing that he can return to balance really well, which is great for an offensive lineman.

“He’s really smart. He’s studied really hard. Guys already can sense that you can count on him to know what’s going on. He moves well on the second level. Hes showing us that he can pull and get on the edge. He’s done nothing but good stuff so far.”

Getting a lone starter from a draft is meager. But this year’s draft, held in April after the virus shutdown closed out a final round of scouting evaluations, is more of a crapshoot than ever. Add in the intense worries of real life, and lots of football things seemed destined to go clunk.

Gloomy, yes. Once everyone gets their grills hammered next week for the first time in nine months, it’ll be old times. Wobbly, but old times.