Thiel: Wilson, Adams own Falcons and the day

Despite the chopped-up off-season, Seahawks laid the wood to the Falcons 38-25 in Atlanta, led by stellar showings from Russell Wilson and newbie SS Jamal Adams. 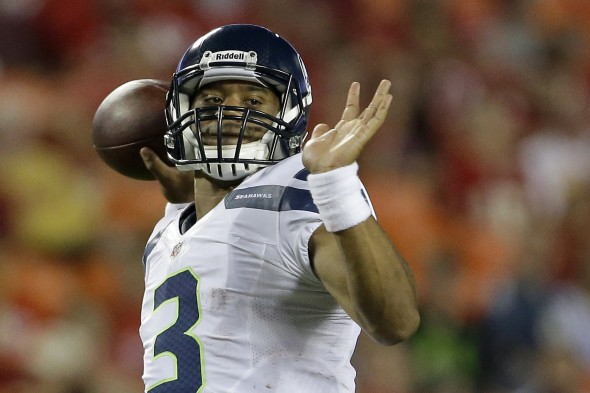 Sure, it came through the TV. From Atlanta. And it wasn’t much help for the physical well-being. But for sports fans beleaguered by fire, disease, racial tension, financial and political peril, the Seahawks offered some psychological sustenance.

In the grand scheme, the 38-25 triumph (box) over the Falcons in what amounted to the Grand Canyon of the South may be little remembered. But there are no longer grand schemes. Only the day to day.

And this day was quite good for the Seahawks and all who are interested in them.

“To get that first one under our belt, score 38 and not even play that great . . . ” said TE Greg Olsen, marveling at his first Seahawks game after 14 seasons elsewhere. “There was a lot of uncertainty coming in, with the lack of fans, and no preseason. Personally, even though I’ve played a long time, this was the first time in a new setting, new system, just a lot of new scenarios playing out in your head.

“You feel like a rookie again. You have your nerves about whether or not you can still do this.”

As with all NFL teams in the COVID-19 world, where the ordinary is forbidden and new ways are mandatory, disruption is inevitable and persistent. A pervasive rookieness.

Which is part of the reason the offensive play of the game seemed to have an out-sized, effortless majesty.

Ahead 14-12 to open the second half, QB Russell Wilson, as ever in command of himself, team and situation, faced a fourth-and-5 at the Falcons 38-yard line. There would be no kicking.

“To be honest with you, they made a good stop on third down and they’re all celebrating,” he said, referring to a tackle of RB Travis Homer for a two-yard loss. “I was like, OK, well, let’s go after them.”

It was as if the villain had just soiled the white dinner jacket of James Bond.

.@DangeRussWilson wanted it all 💥

A perfect throw to @dkm14 for the touchdown on fourth down!

“We want to be aggressive in that situation,” he said. “(Offensive coordinator Brian Schottenheimer) and I are on the same page. We went for it. Sue enough, DK makes a great play.”

Metcalf blew past CB Isaiah Oliver and ran down the ball that seemed overthrown, but was perfect for a 4.4-second 40 man.

“That was big for us,” Wilson said, as he stepped over the villain and sat down to resume his martini.

That was the most glamorous part of one of Wilson’s best days — 31 of 35 for 322 yards, four touchdowns, no turnovers and a QB rating of 143.1. His 88.6 completion percentage tied for the third-highest mark in a single game in NFL history, minimum 35 attempts.

He even led the Seahawks in rushing with 30 yards, 28 on a read-option keeper that hasn’t worked so well in years. That made him the fifth QB in NFL history to have 4,000 career rushing yards.

The low rushing total was reflective of a refreshed game plan that included just 20 rushing attempts and a variety of screens, shorter passes and no-huddle plays. The Metcalf touchdown was Seattle’s longest play.

Whether this was to help an offensive line with three newcomers, or a final acceptance of the popular demand by SeahawksTwitter users to #LetRussCook, it represented change during a period when the absence of practice time dictated pursuit of the status quo.

“I think it’s a testament to preparation throughout the whole off-season, and obviously through training camp and definitely this week as well,” Wilson said. The Seahawks made no turnovers, and their six penalties cost 46 yards.

As Olsen said, it wasn’t all great — Wilson was sacked three times, hit 10 times and the Seahawks were three of nine on third down. But given the potential for disjointed play, the flaws were manageable.

As coach Pete Carroll put it, “We really had command of the game on the offensive side throughout.”

Command on defense belonged to SS Jamal Adams. In his first Seahawks game, he was so everywhere that it seemed as if Seattle acquired two players from the Jets for the two first-round draft picks: 12 tackles, two for loss, a sack and two quarterback hits.

“He was all over the place,” Carroll said. “He’s an extraordinary football player.”

Adams also brings an energy and intensity that seemed to leave the defense with the Legion of Boom.

“He’s got so much fire and he’s a credible competitor — it does rub off, yes,” Carroll said. “I’m so thrilled he’s on our team, as much for what else he brings and how he affects other people.

“(In the absence of fans) it really does call on us to maintain the juice and the energy. He’s a wonderful player to exemplify that.”

Said Wilson: “He’s been an unbelievable player and leader. Our defense can be really special this year.”

After giving up 506 yards, that remains to be seen.

The defense predictably took some big yardage hits from QB Matt Ryan and WRs Julio Jones, Calvin Ridley and Russell Gage — each had nine catches for a combined 401 yards — but the bigger stat was that the Falcons were 0-for-4 on fourth down. In 12 possessions, that’s a remarkable failure rate for a good offense.

Besides Adams, the Seahawks defens had two others new to the starting lineup, CB Quinton Dunbar and DE L.J. Collier (three, if you count returnee Bruce Irvin), so the learning curve is underway.

Adams was asked what it was like to watch Wilson from the sidelines. He offered up a big grin.

Even those who are used to it would agree, especially in somber times. However it arrives, take the light.