As happens with Seahawks and Patriots, it came down to the final moments. Sunday, it was Belichick’s turn to flub. The Seattle defense, not Wilson, had the final word. 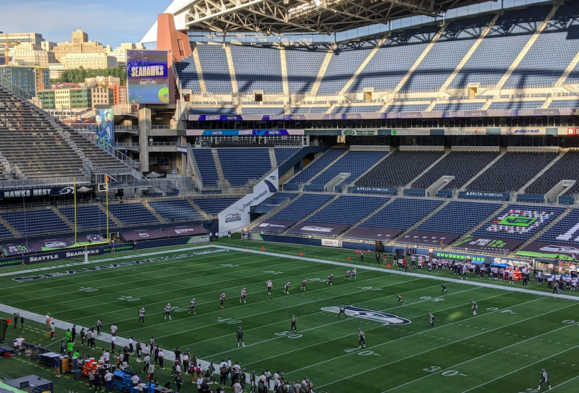 If the usual rowdy crowd had been at the Clink — in full throat when the two best NFL teams over the past decade were deciding the Sunday night national showcase game on fourth and goal at the 1-yard line with three seconds left — Seahawks SS Jamal Adams might never have gotten the word that LB Bobby Wagner said that the Patriots’ final play was going to be a run to the defense’s right.

Adams was certain that New England QB Cam Newton was going to take the snap and jump over the line. Adams was preparing to meet him in the air.

“Like he always does,” said Adams. “I was playing plays in my mind, you know, from film study.

“I would have guessed wrong.”

Able to talk normally in the absence of the audio riot, LB K.J. Wright convinced Adams that Wagner knew his stuff.

“I did not want to make a mistake and jeopardize the team,” said Adams, so he joined the swarm to the right as Newton went to his left with the ball.

That’ll do it ❗️ pic.twitter.com/SQR6ndhmnV

“That’s a play that we had favored in the game and we ran it a couple of times,” Newton said. “We figured that we went to the well one too many times.”

Adams could hardly believe it.

“Coming down on the backside, the whole line getting penetration — oh, man,” Adams said. “What a defensive stand. That was big, flipping Cam.”

Since Adams is a newbie to Seattle, he doesn’t know how big.

Sure, the dramatic 35-30 victory (box) over the remade but still villainous Patriots is a notch on any team’s collective belt. But out-smarting the Patriots at the 1-yard line has a special resonance for those who still are still awakened occasionally by The Game That Cannot Be Unseen.

Of course this wasn’t a Super Bowl. The teams are much changed. This time, roles reversed.

But it was also a lot like 2019, when nearly every Seahawks game was a tightrope walk over Niagara Falls. The climax moments, however, were heavy with irony — the defense delivered the winning blow, after Wilson missed on a critical play.

On the Seahawks’ final possession, at third-and-1 and their own 31 with 1:55 left, the Seahawks elected to throw. Not a swing pass or a flat pass, but a low-percentage deep ball to WR Tyler Lockett that was overthrown by less than a yard.

“We had other routes that got covered,” said coach Pete Carroll, answering yet another question about why the Seahawks threw on a critical short-yardage moment against the Pats instead of rushing. “(The deep ball) just shows you the kind of confidence that he had . . . That was his third choice. That’s how I saw the play. You can ask him.”

“We’ve hit that many times in the past,” he said. “We just barely missed that one. They went cover zero. We almost had it, and that was basically it.”

From the New England 19, Newton looked either like his MVP self from Carolina in 2015, or his Pats predecessor, Tom Brady. He completed five of eight passes and offered up a 12-yard run to deliver the Pats to the doorstep of a big road win in a transition year.

Newton finished 30 of 44 for 397 passing yards, adding 47 yards on the ground with two touchdowns. So it made sense that he should have the ball to decide matters, after leading the Pats to 464 yards of total offense.

“I could have made it right just by bouncing it,” Newton said. “I was trying to be patient, and thinking too much. Or I could have dove over the top. There’s
so many things that flash through me and (when) you’re playing a fast defense like that, as soon as you guess, you’re wrong.”

He didn’t guess wrong often, mostly because the woeful Seahawks pass rush, the uncorrected weakness of the off-season, gave him time for careful consideration.

There were a few valid explanations for the defense’s problems. FS Quandre Diggs was ejected for a helmet-to-helmet hit in the first quarter. Not long after, his replacement, Marquise Blair, went down with what looked like a serious knee injury. Near game’s end, DE Bruce Irvin was lost to a sprained knee.

Nevertheless, they had but one sack of Newton (Adams), five QB hits and one interception. There were times in the final drive that in the pocket he looked like a bored man looking for a bus.

Aside from waiting for young defenders to grow into their roles, there doesn’t seem much that can be done by the Seahawks, other than to let Wilson carry the freight.

He hit on 21 of 28 passes for 288 yards, dishing scores to DK Metcalf, Tyler Lockett, David Moore, Chris Carson and rookie Freddie Swain. Wilson’s first and only turnover of the season was a pass on the opening drive that skittered through the hands of veteran TE Greg Olsen to CB Devin McCourty, who returned it 43 yards. The pick-six hung heavy.

Devin McCourty to the house for a PICK-6! #GoPats @McCourtyTwins

“It just kind of loomed as significant throughout the night,” Carroll said. “It kept them in the game. I love the way we bounced back from that. But that’s seven points we gave them, and just seemed to hang on. It made it a really tight game.”

The break was what the beleaguered visitors needed after a tumultuous offseason. The Patriots lost five key defenders and a starting center in free agency. They cut longtime kicker Stephen Gostkowski. And eight players opted out of playing because of concerns about the coronavirus, most in the NFL. And of course, Brady left after 19 seasons to Tampa Bay.

Given the roster predation, the Pats shouldn’t have been that close to the Seahawks. But a Seattle defense that has given up 1,000 yards in two games means every opponent with a solid quarterback will have a good shot at hanging in, especially at the Clink and its void of noise.

“We missed you so much I can’t tell you,” Carroll said of the fans. “We’re so used to this extraordinary following, a crowd and an energy and juice. Our guys are trying to fill in for you. I just wish so much that you’d have been there for the last play of the game.”

Belichick has wishes too, and one was fulfilled.

“I’m glad,” he said, “we only have to play him once every four years.”

How about a rematch in February?