LB Bruce Irvin and CB Marquise Blair were lost for the season with the same knee injury — a torn ACL. So a bad defense gets worse, just in time for the loaded Cowboys. 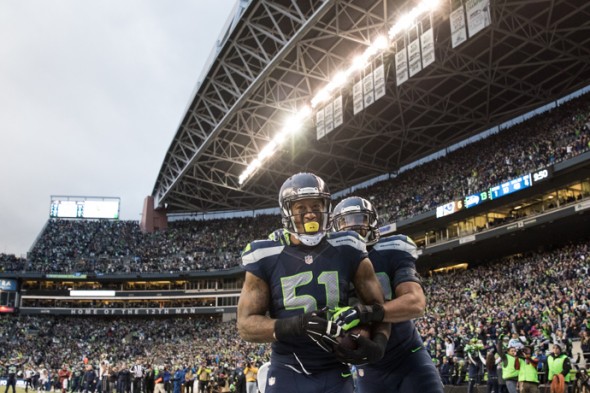 After returning to Seattle at 32, DE Bruce Irvin’s season is done after he tore his ACL Sunday. / Drew Sellers, Sportspress Northwest

Nevertheless, the Seahawks defense’s two-game average of 485 yards surrendered creates blisters on the eyes of fans who not that long ago saw Seattle lead the NFL in scoring defense four years in a row. The average is the worst in the NFL.

For some context, the Indianapolis Colts are best in the NFL in with 208 yards per game.

The gap figures to grow with the arrival of the Dallas Cowboys’ high-performance offense at 1:25 p.m. Sunday, combined with the loss for the season of two defensive starters with the identical injury, a torn ACL.

Are you like me? Do you wonder if Marshawn Lynch can rush the passer?

“We’re gonna miss those guys,” coach Pete Carroll said via Zoom at his Monday afternoon presser. “I feel terrible for them.”

Blair went down in the second quarter of Sunday night’s 35-30 win over New England   during a tackle of RB Sony Michel when LB K.J. Wright accidentally rolled into Blair’s leg.

Looks like the ACL and likely more for Marquise Blair. pic.twitter.com/rFdJ98q3lZ

Irvin was injured in the fourth quarter without contact, a frequent and aggravating aspect of ACL injuries.

Carroll was particularly dismayed with their departures because of the ruthless style both players brought.

“Those guys have a lot to offer your team in their attitude and approach and style of play,” he said. “So it’ll be difficult to replace those guys in that regard.”

The Seahawks were not exempt from the cavalcade of injuries in Week 2, many to stars, that was the weekend’s larger NFL story, surpassing the high drama of the taut Sunday night game.

“A lot of teams lost players this weekend,” Carroll said. “We we certainly felt it with with both those guys.”

Popular speculation suggested that the training schedule withered by COVID-19 restrictions played a role. Carroll didn’t dismiss it, but he said the club’s research team was looking for a potential connection between reduced training and the big uptick from Week 1.

“We’ll find out the numbers between Week 1 and Week 2 in the last couple of years. I’m kind of conflicted, because I know in college, you do the same (training regimen). I don’t remember Week 2 being a tremendous weekend for injuries. We have a whole group of guys that are working on that.”

Whatever they find out won’t replace Irvin and Blair. Carroll wouldn’t say whether the club would go outside to fill the roster spots, but did confirm two moves in-house.

Second-year CB Ugo Amadi will step in at the slot corner spot for Blair, which he did Sunday  when Blair moved over to fill in for FS Quandre Diggs, who was ejected for a helmet-to-helmet hit.

Amadi ended up with a team-high eight tackles, including one for loss.

“He did well, was really was active,” Carroll said. “Ever since he’s been on the field for us, he shows up. He’s got a great burst to get to the ball, very active. He’s way ahead of where he was last year, when he was just barely getting going. We won’t have any restrictions on what we can do.”

Rookie DE Alton Robinson will play for the first time Sunday. After an impressive training camp to make the 53-man roster as a fifth-round pick from Syracuse, he was listed as inactive for the first two games.

“Alton’s got to be part of it,” Carroll said. “He was the next guy to go. I can’t see how he can’t be part of this game plan. I think he’s up to taking Bruce’s place.”

One growing disappointment that looms larger now is the continuing absence of DE Darrell Taylor, the second-rounder from Tennessee whom the Seahawks traded up to get at No. 48. He’s on injured reserve after surgery Jan. 30 that inserted a titanium rod to repair a stress fracture in his right leg.

The Seahawks knew he was damaged goods when he was drafted in April, but Carroll admitted Monday that Taylor’s rehab went south after the restrictions the NFL implemented on use of team facilities kept Taylor away from the team in Renton.

“We had a good feel for (his recovery) in his workouts that we saw on on video in Tennessee,” he said. “Then they they kicked him out of the facility for the COVID-19 stuff. He had to go on his own. There was a time in there, as he tells it, that he just lost the rhythm of his workouts. It just wasn’t monitored as we would like if he’d have been here.

“It didn’t progress as well as we thought. (At the VMAC) he’d have the guidance that he needed. I think that’s probably why it’s been longer than we thought. He did not have a full-on, steady program. So it’s caused kind of an issue in his return.”

If Taylor had been what the Seahawks thought they invested treasure in, they probably wouldn’t be turning over rocks on the waiver wire this week.

They may get some more snaps out of first-round pick LB Jordyn Brooks as he fills in some of Irvin’s linebacker responsibilities. But as was plain in viewing Cam Newton leading the Pats on three fourth-quarter drives of at least 75 yards each, the defense is in desperate need of veteran help to rush the passer.

One of these games Russell Wilson is going to slide back from near-perfect to merely very good, and the subsequent 30 or so points will look meager compared to the hellfire from the foe’s offense.