Injuries abound in the NFL, including among Seahawks and Cowboys, meeting Sunday at the Clink. Two draftees, Jordyn Brooks and Alton Robinson, get their shots. 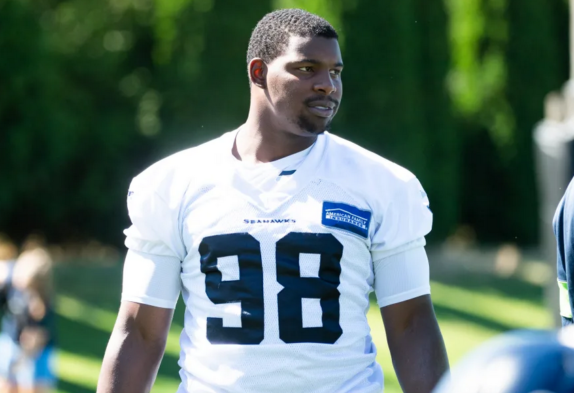 It’s a time of unrelenting uncertainty. Why should the NFL be different? Yes, it has a chance to pull off a whole sports season in one piece. But rarely has a season started with so many broken pieces.

The amount and prominence of the Week 2 injuries was the talk of the league. The national media barely noticed that the Seahawks, too, are out two starters for the season — DE/LB Bruce Irvin and nickel CB Marquise Blair, both to ACLs torn Sunday in the win over New England.

And the Seahawks are better off than Dallas Cowboys (1-1), who come to the empty Clink Sunday (1:25 p.m, FOX). They are missing their two starting offensive tackles (La’el Collins and likely Tyron Smith) and two starting cornerbacks (Chidobe Awuzie and Anthony Brown), among others.

Such early attrition seems rare, and easily attributed to the lack of conditioning and practice time from the restrictions due to the coronavirus. Seahawks coach Pete Carroll said Monday he asked team researchers to look into whether the rate is up year over past years.

“There’s not real solid answer yet,” he said, “but for sure, the numbers are up. What we’re really curious about is what happens this week — does it continue or was (Week 2) kind of a fluke.”

If the disturbance persists, a lot of youngsters are going to grow up quickly.

Brooks played 15 snaps total in the first two games, and will replace Irvin, at 32 a senior eminence. Robinson was on the inactive list for both games, and will fill in behind DE L.J. Collier for Rasheem Green, who was put on the injured reserve list Friday with a neck stinger, meaning he’ll miss at least three games. Another young guy, 2019 fourth-rounder Ugo Amadi, will step in at slot corner. The starts for Brooks and Amadi are career firsts, and Collier is in his third start.

That’s a lot of damaged personnel for a defense that in the first two games has given up nearly as much land as did the Russians in 1867 when they sold Alaska to the U.S.

Nearly as vulnerable is the Cowboys defense, which has been burdened by the installation of a more complex scheme under new coach Mike McCarthy, late of Green Bay. In splitting two games, the Cowboys have given up 59 points and 802 yards.

McCarthy told reporters in Dallas Thursday that his defense made “way too many” mental errors in the harrowing 40-39 triumph over Atlanta Sunday that the Falcons basically gave away.

He plans to simplify the defense against Seattle and its radiator-hot quarterback, Russell Wilson.

“I think that’s Page 32 of the Head Coach 101 manual,” McCarthy said. “When your team has too many mental errors, you cut the volume back. It’s definitely part of the conversations you have as a staff.”

Carroll just has to throw his kids in the deep end.

“We’re really excited for Jordan to get more playing time, for all of the right reasons,” Carroll said. “He’s ready to go. He won’t be perfect, but he’ll be at it. He’s a bright football player. Hopefully we can position him at some good spots to do some good things for him.”

Of Robinson, Carroll said, “He’s real strong with a natural kind of package of moves. We’re not hesitant to play him in any situation. He has the understanding of the playbook, so we’re going in with confidence he’ll do a good job.”

As the top pick, Brooks is under some pressure to justify the choice that numerous draft experts said was an over-reach by Seattle at No. 27. He was ready to do so at the opener in Atlanta, but the Seahawks held him to a meager 15 snaps combined in the first two games.

“Fifteen snaps wasn’t what I wanted, but it was enough to get my feet wet a little bit,” he said Friday. “It’s definitely exciting moment for me. This is the goal coming in.”

As a kid born in Dallas who starred at Texas Tech, to start against the Cowboys is   a splendid deal.

“That was always my team growing up,” he said. “This would be a great week for me to get my first start. I can’t wait.”

Learning curves Sunday will be prominent for both teams, at least on defense. The offenses know what they are doing. No reason to think either quarterback will do anything but feast. Seahawks 41, Cowboys 34.