While patching together a banged-up secondary, Pete Carroll also had to address the NFL’s first virus breakout as well as the presidential-debate debacle. At least he’s 3-0. 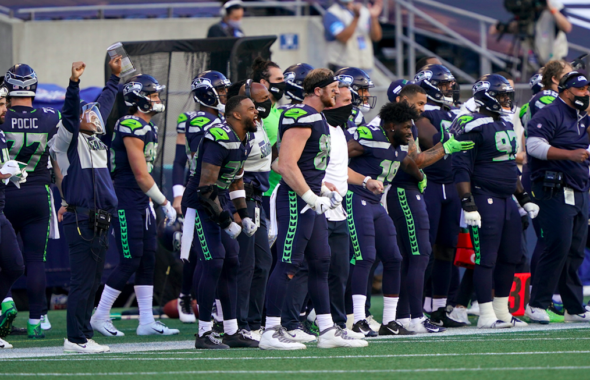 The eyes of the Seahawks offense were all on their defensive teammates on Dallas’s final play Sunday. / Corky Trewin, Seattle Seahawks

As if the week weren’t sufficiently busy with creating from mud and leaves a patch for a secondary that was mediocre when healthy, coach Pete Carroll had to address with the Seahawks the NFL’s first COVID-19 breakout, as well as Tuesday night’s uproarious presidential debate.

He was not asked to help put out fires in his native Northern California.

He does get nightly messages around 12:30 from the NFL updating him on outcomes of his team’s regular COVID-19 tests. Which is an improvement.

Having been fined $100,000 by the NFL (and $250,000 assessed against the club)  for not wearing a mask properly on the sidelines, and seeing a postponement of Sunday’s Tennessee-Pittsburgh game because nine Titans players and staffers tested positive, Carroll was nearly zealous in his desire to preach again to his so-far-compliant choir.

They haven’t had a positive test in the nine weeks since training camp began.

“It takes one person outside of the bubble who can affect all of this,” he told reporters Wednesday on a Zoom conference. “It’s just a reminder, and we need these these reminders.

“We’ve been talking about it all year, and it just gets real when it happens eventually.”

Meeting with players Wednesday, Carroll said he cited the disruptions caused by the outbreak — the Titans, as well as their opponents Sunday, the Minnesota Vikings, had to close their facilities until more tests were completed — and endorsed submission to public-health dictates.

“It’s the messaging from the top, and the demonstration of the manner and how we operate, from all of our coaches and leadership on the team,” he said. “Everybody has to be participating. This is ongoing, full-on for the next 13-14 weeks, whatever the heck it is. We have to do it.”

Carroll was asked if he feels like he’s holding his breath every day.

“I’m not complaining about it; this is what it is,” he aid. “We’re gonna have a great attitude about it. I think attitude is a huge percentage of this. That’s why leadership is so important, and direction and system are so important.

“Really, my mind has been on this for so long, for so many months, well before we ever got back here (to the VMAC), it just seems like a continuation of the new.”

He wondered whether the rigor demonstrated by sports — the NHL just completed a virus-free re-start to its season, and the NBA, WNBA and MLS have been largely successful in minimizing impacts — offered an example of what could have been done nationally.

“You’d think if the whole country could have approached it like (pro sports), we’d be in a much different state,” he said. “There’s just been a handful of (positive tests in the NFL) through the thousands and thousands of tests that have taken place.

“So there’s way to handle this. It’s not what you want, but you can do it. It just takes a diligent mentality to get it done.”

It also takes many millions of dollars and a huge commitment of medical and club personnel to pull off logistics of bubbles or semi-bubbles, particularly when the course of the virus and the remedies to combat it have changed. Chances for success are also enhanced by a cohort of subjects who stand to make millions in salaries. None of these circumstances are found elsewhere.

The NFL also increased the pressure this week by amping up the threat of punishments for failure to comply with game-day protocols. Further negligence by coaches not wearing masks may bring about suspensions and forfeiture of draft picks, according to an ESPN story.

The resources the sports/media industrial complex can throw at the problem is nearly unmatchable. Would that they were available to first-responders and hospital workers.

Also Wednesday, Carroll addressed with players the first debate between President Trump and former vice-president Joe Biden, a disturbing cacophany roundly criticized by all witnesses. It included a response by Trump to a question of whether he would renounce white supremacy. When he passed, instead telling a white nationalist group, the Proud Boys, to “stand back and stand by,” post-debate outraged ensued.

A video summary was shown, and Carroll said he avoided taking political sides.

“We’re not doing that,” he said. “I mean, guys have to be able to think for themselves. I don’t want to be in any way shading their mentality in any direction.

“We showed with the guys that maybe didn’t catch it last night, just kind of what it looked like, so they would have a sense for whatever that was. I want our guys always to know what’s going on, and always be up on what’s happening as best we can, and in whatever depth we can handle.”

LB Bobby Wagner, for one, was generally dismissive of the debacle.

“It was tough to watch,” he said. “Just seemed like two grown men arguing the whole time, and you had Trump doing what he does.

“At this point, you know who he is. He’s not hiding it. he’s telling you exactly who he is. If that’s somebody that you care to support, then that’s unfortunate, but you know, he’s showing us who he is . . . I don’t care about him, or anything that he thinks. He has no play in my life.”

And there were football developments, mostly regarding health and the lack thereof.

In the secondary, Carroll sounded as if SS Jamal Adams (strained groin muscle) was least likely among the wounded to play Sunday in Miami against the 1-2 Dolphins (10 a.m., FOX).

In case they’re not, the Seahawks hired street free agent SS Damarious Randall, a 2015 first-round pick and a 56-game NFL starter, to the practice squad. CB Ryan Neal, who had the game-finishing interception Sunday, was promoted to the 53-man roster.

At linebacker, Jordyn Brooks’ knee is “sore,” Carroll said, and may be replaced in the starting lineup by Cody Barton. Street free agent Tim Williams, a third-round pick of the Ravens in 2017 and a 20-game NFL starter, was signed to the practice squad.

Carroll was more optimistic on offense, where RB Chris Carson (knee) and O-linemen Damien Lewis, Mike Iupati and Ethan Pocic had made progress from leg injuries.

The cumulative hurts made for one of longest injury reports in club history.

As Carroll said to open his presser, “Lots going on.”

Including flying to a state that has lifted nearly all of its COVID-19 restrictions, and will allow about 13,000 fans into the stadium.

Another figurative fire for Carroll to douse.