The Pac-12 released its seven-game schedule Saturday. The Huskies open at Cal, the Cougars at Oregon State, both on Nov. 7. 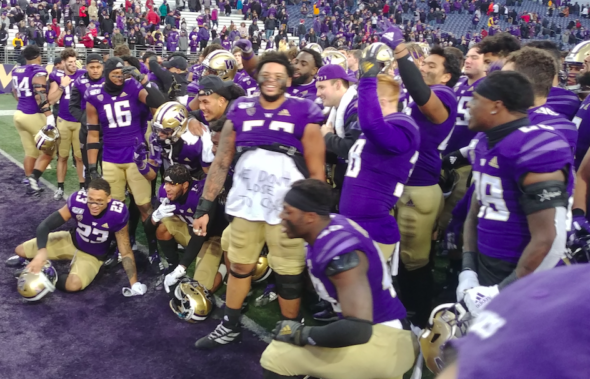 The Pac-12 Conference, certain on Aug. 11 it wouldn’t have a football season in 2020, instead released a seven-game schedule Saturday, including road openers Nov. 7 for both Washington schools, the Huskies at Cal and the Cougars at Oregon State.

As has become the recent custom, the Apple Cup will again be the day after Thanksgiving, this year Nov. 27 at Martin Stadium in Pullman. It will be the first rivalry game for both head coaches, UW’s Jimmy Lake and WSU’s Nick Rolovich.

No start times were announced and, at least for now, no fans will be in attendance at any conference venue.

Besides five games against North Division rivals, a sixth game is against a team from the South Division. UW seemed to come out a little better, hosting Arizona Nov. 21, while WSU travels to USC for a Friday, Dec. 4 contest.

The division champs meet in the confeence title game Dec. 18, and other teams will have a seventh game that weekend.

In a video conference this week, Lake was thrilled to get his first season underway in the fall instead of a spring league.

“It’s like we just won the lottery,” he said. “We’re so excited around here that we have a season to look forward to and we have something to prepare for. Our morale right now is through the roof. But no question, a few months ago it was a roller coaster. We’re playing a Pac-12 season and then we’re not playing it until January and now we’re playing.”