In a game when Wilson was human in the humidity, RB Chris Carson reminded all that the Seahawks can still gash on the ground. Defense wasn’t bad either. 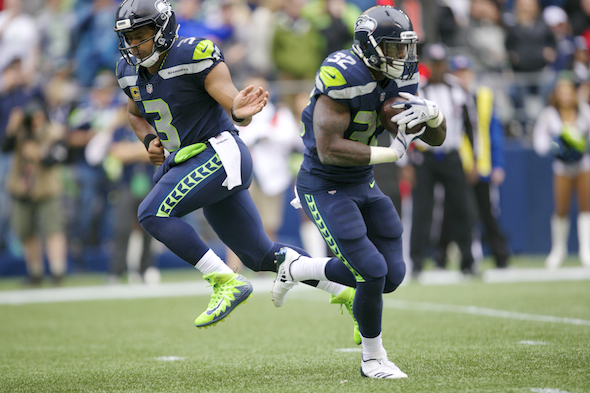 After a gruesome-looking knee injury from a foul deed a week earlier, RB Chris Carson figured to be atop a Seahawks injury list longer than the Columbia River. Yet there he was Sunday, in hot, humid Miami.

Going into the injury tent for what could have been a concussion.

But no. It was “merely” a crushing blow to the chest, causing him to sit out a couple of series.

By game’s end, he had 80 yards rushing on 16 carries, and 20 yards on three catches. He had a pair touchdowns, and the most vital inch of the game — the margin by which he gained a first down at the Dolphins 47-yard line with 1:42 left to preserve the Seahawks’ surprisingly taut 31-23 triumph (box).

.@NFLOfficiating is a first down determined by the tape at the end of the chain or the pole? #SEAvsMIA #Seahawks #Dolphins pic.twitter.com/3BsL7Ur8Y1

There were more flamboyant plays, but none were grittier than his final touch against a defense stacked to stop him. The Seahawks are 4-0 for many reasons, but the ability to count on Carson when everyone knows what’s coming remains an essential part of the story. Even after the Seahawks have abandoned their trademark, run-first offense.

Carson’s recovery from a knee strain after he was gator-rolled last week by Cowboys DT Trystan Hill was surprising enough. But to return after the second-quarter hit, which forced a fumble recovered by C Ethan Pocic at the Miami 24, bordered on the remarkable.

“They hit him really flush, right into his chest — it was just a hell of a hit,” Carroll said. “They didn’t know whether he got his head hit or not.

“That’s not a surprise to us that he would bounce back after he took a hell of a shot. That is a terrific football player.”

Absent Carson, the Seahawks drive died two plays later on a fourth-and-3 at the Miami 18 — the Seahawks’ first red-zone failure of the season after 11 chances. There was no guarantee Carson would have made the difference, but the odds for success would have been much higher.

RB Carlos Hyde was left home with a sore shoulder, leaving the backup rushing chores to second-year Travis Homer and rookie DeeJay Dallas. They contributed, but they aren’t Carson.

“When I came (to Seattle), I told Chris, we’re we’re here to help you, bro,” Dallas said. He’s the lead horse. We go how he goes.  Today he was balling it. It just amped me and Travis up. You ball a little bit harder. He does set the tone.

“The boy had some crazy stuff happen to him against Dallas. But he came back out and showed that he’s a warrior.”

His value was underscored on a day when Wilson wasn’t as sharp as the first three games.

He did throw two touchdown passes for 16 this season, tying him with Peyton Manning for the NFL record through four games. Even though going 24 of 34 for 360 yards would be acceptable behavior nearly everywhere, his passer rating of 112 was his lowest, thanks in part to an end-zone interception that ended the first possession of the second half.

That was the first pick this season fully attributable to him. A couple of drops Sunday didn’t help his stats. Nevertheless, staying unbeaten in the NFL requires verses, not just the same chorus. Carson helped get the Seahawks 98 yards rushing, likely more with a full game.

Wilson did go interstellar on the final possession of the first half. Ahead just 10-9 after a Miami field goal with 28 seconds left, Wilson led the Seahawks over 75 yards in four plays, the biggest of which was a 57-yard bomb to WR David Moore. Homer scored his first career touchdown on a three-yard reception.

“Fantastic,” Carroll said. “We work on that stuff a lot. It’s exactly the situations that we’d like to feel really comfortable in. Russ did it beautifully.”

Beautiful was not a term for Seattle’s defense, but “acceptable” was, particularly in view of the injury absences of three starters, SS Jamal Adams, CB Quinton Dunbar and LB Jordyn Brooks. The defense gave up a season-low 415 yards and forced the Dolphins into field goals instead of touchdowns five times. They intercepted QB Ryan Fitzpatrick twice, and had at least three picks slip from the collective grasp.

Aaaaand @ShaquillG said NOPE ❌ and comes up with a huge interception!

Noteworthy for Carroll was the denial of long passes over the top. The longest pass by Miami (1-3) was a 26-yard catch-and-run from a running back.

“We kept them in front of us all day long and made them work their way down,” he said. “Backups got the job done. Yeah, that’s an improvement.”

Carroll reported no new injuries. The Seahawks continued their mastery over the Eastern time zone, 2-0 this year and 10 in a row, as well as 18-6 over the past seven seasons. In sweltering conditions, they beat an improving Miami team with three first-round picks from the April draft. And Seattle is 4-0 for the first time since the 2013 team did it on the way to becoming NFL champs.

Except that this team plays, except for Wilson, nothing like that team.

“It’s kind of been flipped,” said LB K.J. Wright, who seemed to be everywhere, with eight tackles and three passes defensed. “That (’13) defense was really balling and shutting teams down. Now, it’s the offense looking unstoppable. So when we’re able to bring offense and defense together, we’ll be really hard to beat.”

All they need now is negative virus tests to make a total positive out of the longest trip in the NFL this year.