It’s hard for Pete Carroll to imagine being a good team with a bad defense. But here he is, seeking an unprecedented 5-0 start. In a weird 2020, Seahawks can go deep. 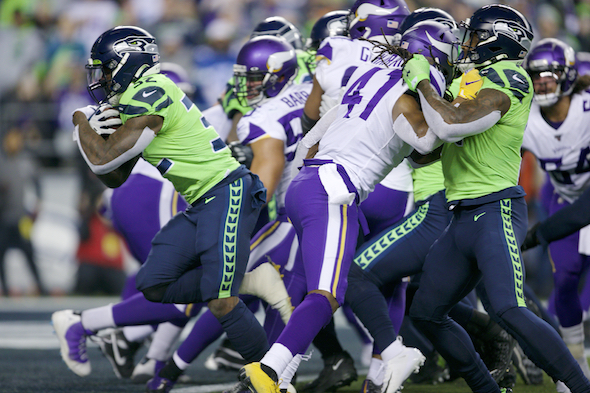 Say, Pete Carroll: If I had told you a few years back that one day you would have a 4-0 start to a season in which you were statistically last in the league in defense, would you have bought it?

“I probably would have challenged that thought,” he said Friday, which is polite Pete-speak for suggesting I commit an act upon myself that is impossible to do, but nevertheless conveys his contempt for my very thought.

But here we are.

With a defense that sometimes can’t stop a drop of water with a sponge, the Seahawks are seven-point favorites Sunday night at home against the 1-3 Minnesota Vikings to go 5-0 for the first time in franchise history. Followed with a bye week to get several players past injuries.

In a time of a global health crisis that has convulsed everything including sports, the Seahawks at the season’s quarter-pole are tip-toeing through the figurative minefield as well as any enterprise. Despite numerous injuries, they are one of four 4-0 teams (Tennessee and Pittsburgh are 3-0) and have yet to be disrupted by the coronavirus.

“We’ve gone close to 60 straight days of everybody maintaining,” he said. “The odds just continue to grow . . .  it doesn’t get easier. It gets probably more difficult.

“There’s uncomfortable things that we have to do and say, and then, hold on.”

In case Carroll wondered what it felt like for Evel Knievel to jump his SkyCycle across the Snake River Canyon, now he knows.

While the virus threat remains constant, the Seahawks’ seasonal launch ramp certainly has been kind.

Turns out that none of the first four opponents — 0-4 Atlanta, 2-2 New England, 1-3 Dallas and 1-3 Miami — were very good. And Minnesota’s only victory was the past Sunday against a divided 0-4 Houston team that fired this week its head coach/general manager Bill O’Brien.

Yes, we all know anything can happen/play ’em one at a time/don’t look ahead, and random yadda yadda. The fact remains there appears to be at the moment in the NFL only one standout team, the defending champion Kanas City Chiefs, particularly after the discovery that Tampa Bay QB Tom Brady can no longer count to four.

For the Seahawks’ chances, it’s not a stretch to envision, for example, a split of the six division games and a loss at Buffalo leaving the Seahawks with a 12-4 record.

That’s how a bad defense can be survived in order to provide at least a fair shot at the NFC’s No. 1 seed and its lone first-round bye this year.

Carroll argued Friday that the defense, giving up a league-worst 476 yards a game, isn’t, well, you know, bad bad.

“I’m proud of the way these guys are playing,” he said. “They’re playing as hard as hell, they’re working hard at their principles, they’re they’re giving us the efforts that makes a difference.

“Our numbers aren’t what we like. So as long as we keep getting better and we keep working, you feel good about the way that the guys are going about it, and the way we’re practicing. This is what we have to live with.”

Carroll also had a favorite comeback to deploy.

“I would have been hard-pressed to say we’d giving up whatever we’re giving up in passing yards and be able to win the games,” he said. “But I would have said, ‘Well, what’s our turnover ratio?'”

At the moment, it’s plus-five, tied with the Chiefs for second, one behind the Cleveland Browns. Point taken.

The other thing he could have said was that the Seahawks’ run defense average 0f 75.8 yards a game is ranked third, which is handy for Sunday because Vikings RB Dalvin Cook leads the NFL with 5.7 yards a carry.

This would be the same Dalvin Cook that, in the Seahawks’ 37-30 win over the Vikings in December, had 29 yards in nine carries.

And that was before the arrival of DT Damon “Snacks” Harrison.

Signed as a free agent Wednesday, Harrison, a former All-Pro, is 350 pounds of scrimmage-line hugs. Carroll was non-committal Friday about advancing Harrison from the practice squad to the active roster (Update Saturday: Harrison remained on the practice squad and will not play Sunday).

It seems plausible for Carroll to imagine the unimaginable — a highly successful team without a good defense. As long as Russell Wilson continues to cook, the defense provides Snacks, and all agree to wash hands and mask up, it is possible to have a gourmet experience in the weirdness of the 2020 NFL.