It’s Stewart’s world, and Storm join her atop it 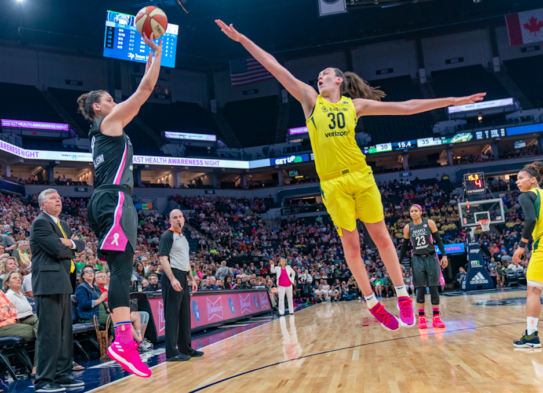 Breanna Stewart, here in a game against the Lynx in Minnesota, was named WNBA Finals MVP. / Lorie Staull, Wiki Commons

After 17 WNBA seasons, Sue Bird figures to have an eye for hoops talent. Yes, she’s a little biased. But after winning a second title three seasons with Breanna Stewart as her Seattle Storm teammate, she’s entitled.

Any doubters were vanquished Tuesday night as thoroughly as the Las Vegas Aces, crushed 92-59 and swept out of the 2020 Finals by a dominant Stewart, who was named Finals MVP after scoring 26 points in game 3 in Bradenton, FL.

The two titles join with crowns in 2004 and 2010 won by the Storm when they were led by Bird and Lauren Jackson, a three-time MVP, who concurs with Bird’s assessment.

In an interview a couple of years ago, Jackson said, “She definitely is going to take the Storm into a new era. She’s really amazing. She can do anything. Obviously, her skills are there. You see her dominating. I think the big thing for her is when she’s on the offense. She’s brilliant.’’

“Stewie is so skilled shooting the ball,’’ he said. “It’s a remarkable tandem (with Bird). You can’t think of too many like that, men or women, that have that energy and are able to dominate a game . . . She is a big-time-game player. She’s been in those kind of moments her whole career and she relishes it. She just has it.”

Stewart has so much of it that, even at a mere 26 and in consideration of previous deeds, she already rates as one of the great champion athletes to have played in Seattle sports.

A prep hoops star in her home town of Syracuse, N.Y., Stewart attended the University of Connecticut from 2012-16 (as Bird did from 2001-04) and led the Huskies to four NCAA championships. She won the Final Four Most Outstanding Player each time, the only male or female athlete to do so. Three times she was named national player of the year.

As the Storm’s No. 1 pick of the 2016 draft – the fifth UConn player to be the first chosen — she had a great first pro season and also won a gold medal with Bird at the 2016 Olympics in Rio. She also won gold medals in the World Championships in 2014 and 2018.

In 2018, Stewart averaged nearly 22 points and 8.4 rebounds per game and was the regular-season MVP, leading the Storm to its third national title. She also was named Finals MVP.

Stewart played winter basketball overseas, in Shanghai and in Russia. She won the Euro League MVP award with the Russian Dynamo Kursk team in 2019. But late in that season, Stewart tore her Achilles tendon. Surgery wiped out her WNBA season, which also saw Bird sidelined with a knee injury.

“I didn’t know what was going to happen after I ruptured my Achilles,’’ she said. “I wasn’t sure if I was ever going to back to where I was. But to be able to be here, to be able to see myself playing like this, and having so much potential going forward, it’s exciting.

“But at the same time also appreciating what we were able to do this year and playing with Sue. It just makes me appreciate more.’’

After helping lead the Storm to an 18-4 regular season, Stewart was spectacular in the playoffs, averaging more than 25 points a game, including 37 in the first game of the finals. She had 154 points in the six playoff games, including semifinal sweep of Minnesota.

Las Vegas took a nine-point lead early in the first quarter, but the Storm came back so hard, the will of the Aces was broken.

“We knew they were going to make a push,’’ said Stewart, the fifth player to win Finals MVP more than once. “But we wanted to make sure we made our own. We were aggressive. We continued to just wear them down.

“To be able to be the 2020 WNBA champs, it’s a huge gold star. This season wasn’t easy in a whole bunch of areas, with the coronavirus, the social injustice (protests) in this country.

“Our team is resilient. We continued to keep going, no matter what was going on. I’m super proud to be a part of this.’’

Her return after surgery to dominant form impressed Kloppenburg.

“She’s a generational player that comes through once in a while,” he said. “To face adversity and even get stronger because of it, I think that’s what we saw with her. She missed a whole year, and came back as a better player in pretty much every category on both sides of the ball.”

Bird, who turns 40 Oct. 16, wants to return to play next season, and has a big incentive.