After 19 seasons and four WNBA championships with the Seattle Storm, no athlete is more deserving of a statue than Sue Bird. Hey, arena builders, you listening? 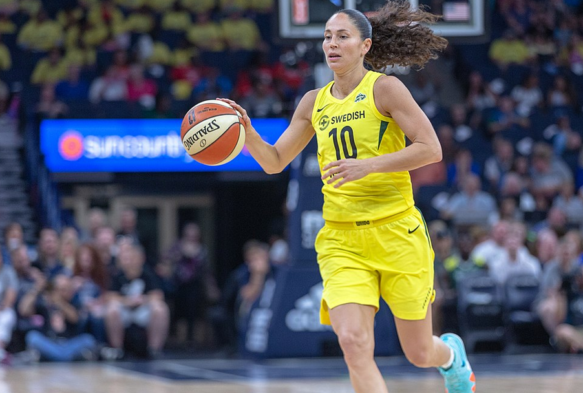 Sue Bird has won each of her four championships with a different coach. / Lorie Shaull, Wiki Commons

Bird, 40 next Friday, is that rarest of finds in professional sports. She has played her entire career with one team, and as was evident from her performance in the 2020 Finals, she’s not just hanging on for some ceremonial victory lap.

She set a record for assists in a single Finals game with 16. She also broke the mark for assists in a Finals series with 33. She’s been the author of a number of no-look passes in her career, but the one in the first half of game three against over-matched Las Vegas was jaw-dropping, a half-floor beauty on the run to her right while she looked to her left. The pass hit Natasha Howard in the hands for an easy layup.

The game was still close but Seattle used a 32-14 blast in the third quarter to put things so far out of reach that Bird spent the fourth quarter enjoying her team’s performance from the sideline.

Much about Bird’s career in Seattle borders on the unbelievable.

She’s played for six head coaches and her titles have each come under a different coach (Anne Donovan in 2004, Brian Agler in 2010, Dan Hughes in 2018 and Gary Kloppenburg — pinch hitting for Hughes, who is taking the year off due to health concerns — in 2020). Numerous general managers and front office staffers have come and gone in her time, including three ownership groups, and the team’s roster has turned over several times.

In 2015, she considered leaving when the Storm decided a tear-down and rebuild was necessary. She decided to stay and struggled with her new, younger teammates through four sub-.500 seasons in a row before breaking through in 2018.

She’s also staged a relentless battle against two enemies of all athletes: Injuries and aging. Asked after the title-game win over Las Vegas about her ability to recover from physical adversity and still play the game at the highest level, despite time’s inevitable march, Bird credited simple hard work.

Bird missed two seasons (2013 and 2019) after knee surgeries, coming back both times to put up numbers and performances beyond what any reasonable person would expect. She missed half of this shortened 22-game regular season dealing with a severely bruised left knee. In her career, she’s had several off-season surgeries, and on at least five occasions her nose was broken.

The most recent was in 2018, and led to her most legendary performance.

In game four of the Western Conference finals, Bird’s beak ended up on the wrong end of an inadvertent Stewart elbow. The Storm lost and next faced Phoenix in a deciding fifth game. Wearing a mask, and shaking off a subpar performance through the first three quarters, Bird came alive in the final six minutes. With Seattle trailing by four, she knocked down four threes and a jumper from the foul line that ignited a series-clinching, 28-14 run.

Her confidence was so high, she launched a three and began backpedaling to play defense while the ball was airborne. The performance is preserved for future generations to watch on YouTube (which didn’t exist when Bird began her playing career).

What they say is, “Game recognizes game.” That night, Kobe Bryant, LeBron James, Dwayne Wade, and Isaiah Thomas all checked in via Twitter with accolades and praise. Tacoma native and former University of Washington star Thomas offered up an idea for a permanent honor.

“Go head and build a statue for Sue Bird,” Thomas wrote. “She’s a legend in the town.”

That along the way she found her voice in regard to social issues is a bonus for those who recognize that many sports stars stopped sticking to sports several decades ago.

Where it should be is on a plaza outside the new Climate Pledge Arena at Seattle Center. In an arena being built primarily by and for an NHL expansion franchise that has made diversity in hiring a major part of its DNA, the idea of a statue honoring one of the greatest athletes in Seattle history who happens to be female is fitting and just.

If Bird keeps playing (she says that’s the plan) and the arena opens in late summer, she could get to play some games there next season. Even if she doesn’t, the site is a fitting location for a statue.  The site remains where, as KeyArena, the place Bird did most of her work.

“She helped keep the Key alive and vibrant in the years after the Sonics left,” is how former Storm CEO Karen Bryant put it.

Here are two suggestions for the statue builder.

First, consider including a face mask or nose guard. That way, there’s no mistaking it.

Second, keep the plaque simple and clean. The message will inspire generations of Seattle hoops stars:

Storm fans can join a virtual celebration of the team’s fourth championship at 4 p.m. Friday by registering here.