First-half collapse, followed by instant renaissance, then another last play stop of the foe before the stage is set for Seattle’s drama king and his court. 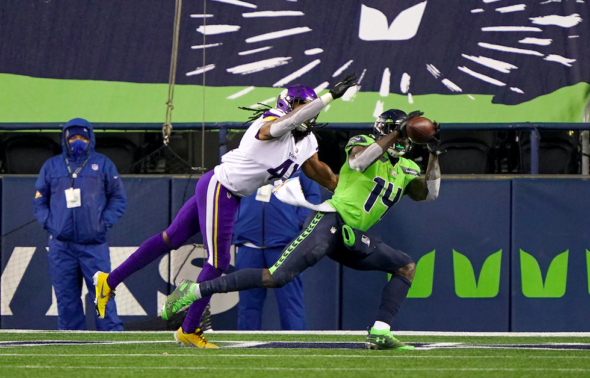 We’ve been to cliff’s edge with Russell Wilson and the Seahawks so many times. The dangle should feel normal: Fingernails trenching up dirt, hands uprooting the only shrub, cold canyon air sweeping up pantlegs, the abyss beckoning.

“I can’t express to the people out there how it feels like when we are going on the field,” he said,” even though (the end zone) was 94 yards away and a minute and 25.”

But of course, he and Wilson don’t have to explain it. They just have to do it. It’s we faint-hearted types who have the rest of our lives to explain it to each other.

Do it, the Seahawks did. Again. Preposterously.

“We’re having a blast,” Carroll said. “We’re just getting started. This season is a million miles long.”

Gah. Don’t say that. There’s not enough fingernails in the Northwest.

And don’t giggle in front of the Vikings, poor guys.

After the 27-26 defeat (box) in the rain at the Clink on national TV, Minnesota (1-4) is now 0-7 against the Seahawks since Wilson’s arrival in Seattle. Despite gaining 449 yards and 31 first downs in building five scoring drives of 11 or more plays each against the worst defense the NFL, they couldn’t get one more scroungy little yard on a fourth-and-1 at the Seattle six-yard line.

End of the Game… 4th & 1: Irv Smith Jr., Kyle Rudolph & CJ Ham make the blocks necessary to get 1yd. Mattison in my opinion should have bounced it up Irv’s back…#Vikings #Seahawks pic.twitter.com/Fuql9QFHC7

“It was about a half a yard. If we got the half a yard, we win the game,” Vikings coach Mike Zimmer said. “So I was trying to go win it. I told (coaches) on the headset, ‘We didn’t come here for this. Let’s go win it.’”

But they didn’t get it. LB Bobby Wagner and DE Benson Mayowa stoned RB Alexander Mattison, gave the ball to Wilson, and there went the outcome.

Remarkably, Seahawks are 5-0 for the first time in franchise history, yet they are three late-moment defensive plays from being 2-3 and swirling about the convulsed NFL landscape like about 25 other teams.

“Who woulda thunk it?” Carroll said, grinning about the Vikings’ stop. “We didn’t play things as clearly as we need to (prior to the final play). They were running plays that we had practiced, but we got blocked. We’re usually really good at that stuff, and then tonight we had some problems, some issues.”

They figured it out just in time, also benefiting from the second-half absence of Vikings RB Dalvin Cook (groin strain), the NFL’s leading rusher. The good fortune followed one of the worst first halves in team history (three possessions, no points, 66 yards of offense), which was followed by three offensive touchdowns in 1:53 of the third quarter, perhaps the best two-minute scoring burst in club annals.

That was thrilling,” Carroll said. “It’s reminiscent of games we’ve played here in the past. Kind of like the avalanche, or the surge, hits, and that was just what we needed.”

After Minnesota recovered to lead 26-21 before failing at Seattle 6, the final whipsaw was at hand. Wilson took over an offense that to that point had failed to convert a single third down in seven tries and converted twice on fourth down.

He first struck with a 39-yard bomb to WR DK Metcalf to reach the Vikings’ 38-yard line. Then with 15 seconds left from the Vikings 6, he found Metcalf on a crossing route with a laser that was barely beyond the reach of FS Anthony Harris.

The drive was the personification of Wilson’s playmaking, including a 17-yard scramble on the first play to force the Vikings to dedicate a defender to spy him.

“Honestly, going through the whole drive, it was just so poised,” Carroll said.
“The players were poised, the coaches were poised, we talked through every single instance that was happening there; measured what we were doing with our time outs.

“We’ve just been through this so much that we really have a nice mentality about us. (OC Brian Schottenheimer)  called things that he knew Russ knew really well, so Russ would be able to exercise the options based on whatever they tried to play in that situation.

“Before the final play, we called time out to just take another look, and gave
Russ a little bit more time to clear his head, and he throws a freakin’ strike to win the football game. Marvelous.”

From the Seattle 6-yard line, Russell Wilson drives the Seahawks down the field and utilizes his favorite weapon along the way – D.K. Metcalf. Seattle wins this nail-biter 27-26.

Metcalf, who had six receptions for 93 yards and two scores, is developing a supreme confidence with Wilson.

“Any time we’re in that moment,” he said, “it’s easy for us to just go out there and play our football because we know we’ve got a quarterback that can make anything possible.”

With the ultimate moment upon him following three incompletions, Wilson did as he almost always does.

“Just kind of scanned the whole field,” he said. “Looked left, looked right, came back to DK. Boom, there he was. Tried to zip it in there to him just before the (pass rusher) kind of got to me.

“I don’t even know how to explain it.”

If he can’t explain it, none of us can, even after witnessing 33 previous game-winning drives led by Wilson in the fourth quarter or overtime.

Feel free, however, to savor each harrowing, exhilarating moment of the enterprise. Nothing at this level is going on anywhere else in the NFL. 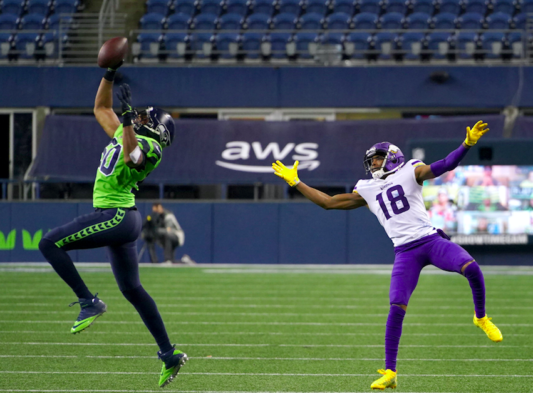