Benched in Cincinnati, DE Carlos Dunlap, one of the NFL’s top pass rushers, was available for cheap. The Seahawks made a deal for a fix desperately needed. But not for Sunday. 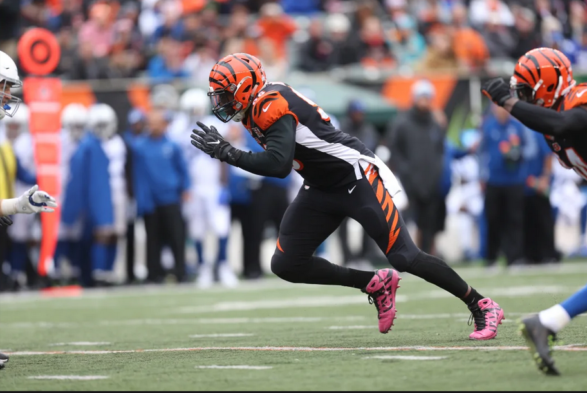 DE Carlos Dunlap is No. 2 on the Bengals’ career sack list. / Bengals.com

Since NFL trade rules precluded Pete Carroll from immediately talking about DE Carlos Dunlap until his acquisition from the Cincinnati Bengals was formally completed Monday afternoon, reporters had go about finding the story a different way.

So, coach, is DE L.J. Collier living up to expectations?

Putting his response through the Carroll words-to-truth translator app: Not so much.

“Well, in the sense that he’s playing 39-40 plays, that’s a good amount of play for a guy really getting going for the first time,” was what Carroll said directly on Wednesday’s Zoom conference. “He’s playing hard, playing tough, he’s working his tail off.

“The throwing game came out real quick last week and we got a minimal amount of pressure. We like to see him be able to get clean, get free in the backfield a couple more times, but I’m pleased with how hard he’s working.”

Anytime Carroll’s compliments are limited to hard work, it’s trouble. Hard work is the minimum baseline for any professional athlete. To do otherwise in the NFL is to end up tackling one’s couch on Sundays. The goal is to do well.

Included among Collier’s 39 snaps Sunday in the 37-34 overtime loss at Arizona was a single recorded stat, a tackle for loss. That modest production is hardly a primary reason for Seattle’s first defeat of the season. But it is why the Seahawks busted a move for a D-lineman Wednesday, six days ahead of the NFL trade deadline.

The Seahawks are on track to be the worst defense in NFL history, so much so that the league may have to switch measurement tools from yards to light years.

Later Wednesday, Carroll explained that the other end, Benson Mayowa, has been overworked after the injury loss for the year of Bruce Irvin in the second week.

“Losing Bruce was a big deal to us,” he said, “because we knew he was an accomplished rusher. Both him and Mayo had been productive on the teams they come from.

“(The trade) will really help Benson a lot, just to be able to keep us fresh. We know that if we can keep Benson fresh, he really can be effective.”

“We’re still developing, unfortunately,” Carroll said. “Six games into it, going on seven, that’s where it is, and we’re gonna get better.”

But not in time for Sunday’s home contest with the San Francisco 49ers, the defending NFC champs, who have learned to play with a limp, one-armed and copious blood loss, to a 4-3 mark.

Coach Kyle Shanahan cannot wait to get to an empty Clink and unleash his offense full of deceit, chicanery and illusion on a once-formidable adversary that has regressed to near-unrecognizability. Particularly without Dunlap, who has played his entire 11-year career in Cincinnati. He won’t have passed enough covid-19 tests in Seattle by Sunday to be eligible.

At 31, Dunlap (6-6, 285 pounds), acquired for the tokens of non-playing C B.J. Finney and a seventh-round draft choice in 2021, will be eligible in his first game Nov. 8 in Buffalo. The Bengals’ No. 2 career sack leader with 82.5, including a team-high nine last season, Dunlap doesn’t appear to be too far along in the downside of his career.

An All-America selection at Florida, Dunlap was part of the 2010 draft class from which the Seahawks took SS Earl Thomas sixth and LT Russell Okung 14th in the first round. The Bengals took Dunlap with the 54th pick in the second round. Six spots later, the Seahawks took WR Golden Tate.

But things were not going well this year with the Bengals. Under coach Zac Taylor, the Bengals were 2-14 in his first season last year — although they barely lost, 21-20, to the Seahawks in the season opener — and are 1-5-1 now with No. 1 draft pick Joe Burrow at quarterback.

Shedding big veteran contacts from over-30 players like Dunlap makes sense for the Bengals, particularly when he complained loudly about his demotion to the bench this season. He started the first four games before being a reserve the past three, playing 59 percent of the snaps.

It also makes sense for veterans to want to play for win-now teams like the Seahawks. Dunlap was mad enough to help induce a trade. Sunday after the Bengals’ 37-34 loss to Cleveland, he tweeted, then deleted, that his Cincinnati home was for sale:

~6000 sqft city view with huge balcony. 4 bedroom. 4.5 bathroom. In one of the best school districts for sale. Do your market analysis and make me offer. Serious inquiries only with proof of funds!

Owner is willing to sell furnished or unfurnished!

Near the end of the game Dunlap was caught by TV cameras arguing with an assistant coach on the sidelines:

This is Carlos Dunlap arguing with a coach at the end of the game. Appears to be defensive line coach Nick Eason. #Bengals @fox19 pic.twitter.com/5E8cXf1jjK

So Taylor ordered that Dunlap not show up to practice this week because the club was indeed going to trade him. After getting word Wednesday morning, he posted a video of himself removing the nameplate from his parking spot at the practice facility.

Carlos Dunlap posted this video on his IG shortly before noon today.#Bengals pic.twitter.com/AKNrWFwUzd

A small bonus in the deal for Seattle is that Dunlap’s contract runs through 2021 (next year will cost a non-guaranteed $11 million), meaning he may not be a rent-a-player. By trading Finney and his $2.5 million against the cap, they get some relief from Dunlap’s $4.89 million salary, according to overthecap.com.

But he won’t be a help this weekend. The Seahawks will be aided only by the notion that Jimmy Garappolo isn’t Kyler Murray.